What exactly is energy democracy, and how will we achieve it? The Institute for Local Self-Reliance is seeking an answer to this complex question, but we are far from the only folks doing so.

ILSR shares this space with the Energy Democracy Project, which came together in 2016. With editors Denise Fairchild and Al Weinrub, they published a book on the subject in 2017, Energy Democracy: Advancing Equity in Clean Energy Solutions. The book illustrates what energy democracy looks like in practice.

On this episode of the Local Energy Rules podcast, host John Farrell speaks with Denise Fairchild, President of the Emerald Cities Collaborative, about Energy Democracy. As co-editor of the book, Fairchild helps explain the concept of energy democracy to Farrell for a recent episode of ILSR’s Building Local Power podcast, republished in a slightly shorter version for Local Energy Rules.

The Emerald Cities Collaborative (ECC) was one of four organizations that brought together the Energy Democracy Project. As President of the Collaborate and co-editor of the book, Denise Fairchild’s work was integral to the process.

Fairchild describes the book as a collection of stories. Inside, 15 authors and the co-editors bear witness to local efforts for energy democracy. In the interview, Fairchild further describes her favorite story: the democratization of a rural electric cooperative in Jackson, Miss.

Though electric co-ops are more democratized than their investor-owned alternatives, they can be far from inclusive. In this case, Fairchild describes the lack of community participation in Jackson’s member-owned utility. Members did not know they were owners of an electric company, did not know about meetings, and were not receiving dividend checks. Meanwhile, the co-op was burning unhealthy coal and giving the profits to politicians the residents did not support.

I don’t think just putting our energy resources into the hands of the government suggests that we are actually going to get to energy democracy.

Through a true grassroots movement, led by the organization OneVoice, residents became educated and politicized. Knowing their rights as members of the cooperative, residents restructured the co-op so that it would serve their needs. 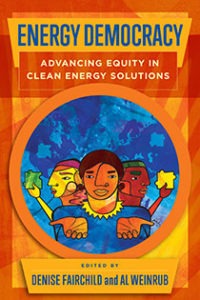 The book traverses over geography, generations, and cultures, but the tour does not end there. The Energy Democracy Project, with the groups involved in the book, organized an Energy Democracy National Tour. The tour brought attention to successful initiatives and invited leaders in the energy democracy movement to learn from each other. By creating this network of leaders, the movement strengthens and becomes more cohesive.

The tour began in Oakland, Calif., where attendees celebrated the publishing of the book. It concluded one year and 20 stops later. Events included celebrations, forums, summits, strategizing sessions, and trainings.

Electricity as a Resource for All

One concept from the book Fairchild and Farrell discuss in depth is the idea of energy supply as a commons. As Fairchild describes, the commons is not a revolutionary idea. It can be found in the Magna Carta, modern public trust laws, the New Deal, and the U.S. National Park system.

There’s nothing uncommon about the idea of the commons.

At its core, the commons creates a system of value for shared resources. It is rooted in traditional societies, such as American Indigenous communities. For this reason, Fairchild emphasizes bringing culture into the fight for energy democracy.

Can energy democracy be defined in one line? Fairchild doesn’t think so. Rather, she summarizes it as the solution to a broken economy.

She says that we need to “recognize that fixing income inequality, fixing racism, fixing gender inequality, fixing environmental degradation, really requires changing an economy that’s screwing up everything.” Energy democracy is just one avenue by which to do the work of a much broader democratization:

For me, I think it’s a way to reimagine, reengineer, rebuild our economy.

Fairchild says that the energy revolution is already underway. In the face of climate change and growing renewable technologies, utilities know that they need to change – but how? Fairchild hopes that the answer to this is energy democracy. It is the route that offers the most benefits, two of which sound familiar to those following ILSR’s Energy Democracy Initiative:

However, arriving at an energy democracy won’t be easy. Technical knowledge, financing, and community support are all necessary drivers of this crucial transition.

How to Get There

In her written conclusion for the book, Fairchild argues that “to dismantle the fossil fuel economy is in fact analogous to what it took to dismantle the slave economy.”

She makes this analogy because in each instance, activists had to topple three pillars: property rights, profits, and power/privilege. She draws a parallel between the two economies by comparing fossil fuels to slaves: both represent the energy input to the economy. In both instances, benefits and burdens were unequally shared.

Combating the environmental degradation and inequalities of the fossil fuel industry requires breaking down the same three pillars as in the slave economy. Since the three pillars are closely tied, they can only fall as a trio.

The first pillar, property rights, can be softened with the idea of the commons. Fairchild describes how individualism has resulted in commodification, monetization, and a mass accumulation of wealth. Now, she says, battles over  property rights have been brought to the courts: Who owns our water? Who decides what happens to our public land?

Without natural resources as property, there will be less extremes in profit, and the accompanying power and privilege. Fairchild discusses the cycle between profits and power that plays out in the fossil fuel industry, where companies are known to buy favor with politicians. The solution, says Denise, lies in reducing the political power of large fossil fuel companies by reducing their financial might.

To learn more, find Energy Democracy at your local independent bookstore and catch the full interview on Building Local Power.

Fairchild’s reading recommendation: Think Like a Commoner, by David Bollier.

This is the 83rd episode of Local Energy Rules, an ILSR podcast with Energy Democracy Director John Farrell, which shares powerful stories of successful local renewable energy and exposes the policy and practical barriers to its expansion.

Appreciate CleanTechnica’s originality and cleantech news coverage? Consider becoming a CleanTechnica Member, Supporter, Technician, or Ambassador — or a patron on Patreon. Don't want to miss a cleantech story? Sign up for daily news updates from CleanTechnica on email. Or follow us on Google News! Have a tip for CleanTechnica, want to advertise, or want to suggest a guest for our CleanTech Talk podcast? Contact us here.
In this article:audio, Institute for Local Self Reliance, John Farrell, podcast