Cleveland was once the center of the oil refining industry – and the environmental pollution that accompanied it. Can an economy born of fossil fuels rise from the ashes, promote renewables, and proceed to an equitable and clean-powered future?

For this episode of our Voices of 100% series of the Local Energy Rules Podcast, host John Farrell spoke with Jocelyn Travis, Campaign Manager for the Sierra Club’s Ready for 100 campaign in Cleveland. The two met in Milwaukee at the RE-AMP annual meeting to discuss Cleveland’s landmark commitment to 100% and how the city can make it to this goal in an equitable way.

Listen to the full episode to learn how Travis and the Ready for 100 network are taking action to support local, clean energy, and explore more highlights and resources, below — including a transcript and written summary of the conversation.

A Time to Celebrate

On September 20, 2018, Cleveland committed itself to 100% renewable energy. As the 83rd city to do so as part of the Sierra Club’s Ready for 100 Campaign, Cleveland set a commitment date of 2050. In a long process driven by the community, Jocelyn Travis and her team got the city to add the 100% goal to an update of their Climate Action Plan.

While the city celebrates its decision for a clean, renewable future, it also celebrates the 50th anniversary of the infamous Cuyahoga river fire. Throughout the 20th century, the Cuyahoga river caught fire a dozen times. Without regulations, Cleveland industries were free to dump flammable waste into the river. The last blaze, in 1969, finally caught the attention of the country. The fire sparked an environmental movement responsible for the Clean Water Act and the formation of the federal Environmental Protection Agency (EPA).

Fifty years later, Travis says that being the “butt of jokes all over the country,” has motivated her and other Cleveland residents. In the decades since the fire, environmental improvements have addressed the underlying pollution. Now, the renewable campaign can take heart from the history. Travis describes rowing and recreation on the river, while the EPA recently declared Cuyahoga fish safe for eating.

Once the city’s celebration of the transformation ends, Travis says that the city will turn its attention to fulfilling its commitment to an equitable, clean energy future.

Hurdles Along the Way

At first glance, Cleveland seems an unlikely place for a successful Ready for 100 Campaign. The city is in the center of the Rust Belt and had few midwestern examples to follow. Additionally, Travis cites Cleveland’s long histories of pollution, segregation, and poverty as reasons why transitioning to 100% renewable energy might not have been the city’s top priority. However, these factors became fuel for Travis’ campaign and all the more reason to make the commitment – with an equity focus.

When Travis heard that the city was making a new Climate Action Plan, she saw this as the perfect opportunity. As a member of the advisory council, Travis was determined to make sure equity and inclusion were always part of the process.

The campaign had its challenges. While Mayor Frank Jackson is one of hundreds of “Climate Mayors” across the country, it was hard to get his office involved. Instead, Travis and her team connected with the City’s Office of Sustainability.

The powerful investor-owned utility, FirstEnergy, also challenged the commitment. The utility has a lot of power in the area, from political contributions to elected officials, or even the marquee name on the Cleveland Browns football stadium. 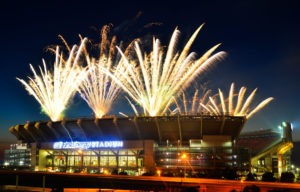 Lately, FirstEnergy has been in the news for its influence over the Ohio legislature’s House Bill 6. This bill, just signed by the Governor, will charge Ohio ratepayers to bail out two failing nuclear plants and coal power plants. Though the plants are important for their local economies, FirstEnergy customers will have to pay $150 million per year to keep them afloat – in a market with less expensive electricity from renewable energy. Utilities will no longer have to meet prior renewable portfolio standards, or support energy efficiency programs.

Despite popular disapproval of the bill, Travis describes how leaders are reluctant to “rock the boat” in regard to FirstEnergy’s interests. Having just invested a lot of political and financial capital in non-renewable energy, the shareholder-owned company may prove unhelpful in meeting the city’s renewable energy goal.

For more on the power of investor-owned electric utilities in energy markets and politics, listen to this podcast from ILSR’s Building Local Power series.

Cleveland’s clean energy organizers also faced an uphill struggle to inform residents about their utilities. Unlike other cities, Cleveland is served by two utilities. In addition to FirstEnergy, a portion of the city’s electricity customers receive power from a municipal, city-owned utility.

The city has an opportunity to purchase contracts that are going to be in the best interest of the community, but again, if we’re not demanding it, I dare say it’s not necessarily going to happen.

Equity at the Forefront

Throughout the conversation, Travis reiterates the importance of equity and justice. Considering her background in the environmental justice movement, she is well practiced in uniting a cause that is too often separated.

For Travis, equity – ensuring all Cleveland residents benefit from the renewable energy transition – comes from community engagement and working at the local level. First, the residents of Cleveland need to know how the Climate Action Plan affects them and why they should care.

Travis and Farrell discussed a potential connection. In Minneapolis, a program targeting lead in homes of low-income residents has begun providing assistance on energy conservation to lower residents’ energy bills.

Our concern is that it’s an equitable and just transition. That we’re really being inclusive, and we’re looking at what is going to be the best for the total community – not just some aspects of the community.

In the wake of the 100% renewable commitment and on the shore of a cleaner Cuyahoga river, Travis has many reasons for optimism. She sees renewable energy as the solution to many problems in the community, one being unemployment.

In spite of legislation that has impeded the generation of renewable energy within the state (Ohio has one-third of the wind capacity of neighbor Indiana), Ohio has the third most renewable energy jobs in the Midwest. As there is already public support for expanding renewables, Cleveland could fulfill its commitment using local renewables and keep the economic benefits of renewable energy in Ohio.

Data from UC Berkeley (2004) shows the job potential in renewables: 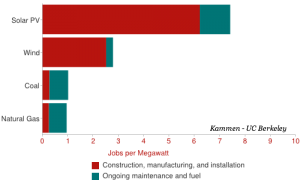 In addition to rolling out renewables, there are compounded economic benefits from keeping energy production under local control. ILSR published a report called “Advantage Local: Why Local Energy Ownership Matters,” which found the following results: 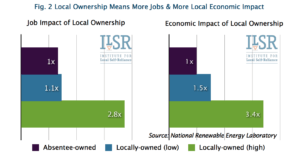 This data shows some of what Cleveland has to gain through a transition to clean energy.

Cleveland individually made its commitment to 100% renewable energy, but it didn’t do so alone. There are now over 120 cities and several statescommitted to making the transition. Travis brings up the value of the Sierra Club’s national campaign and its network, which supports individual cities however it can.

As Travis says, “why reinvent the wheel?” All of these cities can learn from and support one another as they work toward their commitments. A large city like Cleveland can take some pointers from Atlanta, which Travis says has a strong implementation plan.

Once we have the commitments, now let’s start all working together to make sure that it’s an equitable and just transition, and that it’s a win-win for the total community. So, I would just urge people, if you are in a community that has not made a commitment yet, work with us. Come on and get involved. We need everyone to realize the importance of saving our planet. We need you.

Cleveland has undergone quite the transformation since 1969. Now, to fulfill its commitment in an equitable and just manner, it will have to do so again. Achieving a goal like this takes time and effort; the work of Travis and other environmental justice advocates is far from done. We hope that in 2050, the city will be celebrating once again.

This is the 12th episode of our special  Voices of

series, and 82nd of Local Energy Rules, an ILSR podcast with Energy Democracy Director John Farrell, which shares powerful stories of successful local renewable energy and exposes the policy and practical barriers to its expansion.