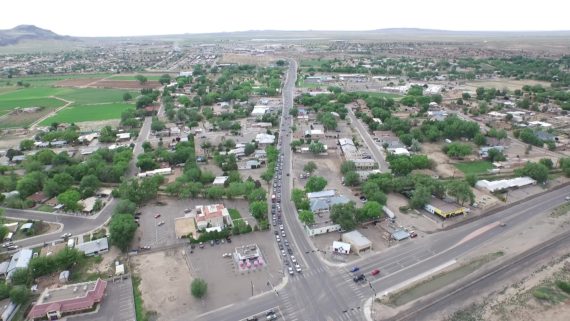 Traffic congestion at a light in Los Lunas, NM. Photo by Jennifer Sensiba.

One day I was at the grocery store and happened to run into our city’s roads coordinator while waiting to check out. I mentioned that all the traffic lights on the main street are mismatched and driving across town I got two green lights.

He replied, “I’ll make sure that never happens again.”

Non-hybrid vehicles with Internal Combustion Engines (ICE) use their fuel to accelerate, to maintain speed, and to idle. On top of that, they use fuel for accessories that give us climate control, lighting, sound systems, power steering, and more. Comparing all of these, acceleration is the most fuel intensive activity for most ICE vehicles. If you have an instantaneous fuel use gauge, you will notice many cars get below 5 MPG during heavy acceleration. Then, as you approach the next light, you press the brake pedal. After burning a bunch of gas, expelling carbon into the atmosphere, and polluting the local air to get that speed up, your brakes convert it all into useless heat. On top of that, we should bear in mind that brake dust adds particulate matter to the atmosphere, making the problem worse.

Many cities make this problem worse with poor light timing. This is a simple problem to solve, and can reduce fuel consumption in the city by an appreciable percentage. Some argue that it will actually cause more fuel use, as it becomes more pleasant to drive and people drive more (the Jevons paradox), however this is happening regardless. More miles are being driven, setting new records annually. Additionally, we should not forget that every time the price of oil drops, SUV purchases rise. Plus, while gasoline consumption fell slightly despite the higher miles thanks to the efficiency standards (which Trump is trying to repeal), carbon production regrettably rose in 2018.

If this were always easy, everybody would be doing it. Cities run into challenges here.

In some cities the, lights were synchronized at some point in the past, but fell out of sync for various reasons (deferred maintenance). In others, they are following the misguided philosophy of using mistimed lights to slow motorists down. Finally, they face the challenge of needing different timing at different times of day (morning vs evening rush hour, daytime, night).

When pressed, many officials complain that the cost to synchronize traffic lights is too expensive, but this is a poor excuse. If you asked the average person whether they would spend $1 to save $10, they would overwhelmingly vote in favor of spending the dollar. When elections are often decided by small margins, this would likely win in an epic landslide.

How Do We Fix This Problem?

Syncing traffic lights is not a matter of simply making them all green at the same time. It’s more complicated than that.

For main arteries with simple timers, planners need to sync lights based on traffic flow. The more heavily traveled streets need to have a longer green light time, and be timed so that if a driver is traveling at a consistent speed (near the speed limit), then they’d only encounter green lights. However, this speed must be realistic. If drivers are all going faster, they’ll end up encountering red lights, which would defeat the point.

For more complex situations, technology is the answer. At some intersections, cities place sensors in the pavement to know who is waiting and give them priority during slow times. In others, there may be cameras mounted above the lights. They aren’t surveillance cameras–they’re there to watch traffic so a computer can optimize lights by giving the side with more traffic more green light time. For areas in a city with many lights, it’s possible to network these computers together and have them automatically work together to smooth traffic flow.

Yes, all of this costs money to adopt and maintain, but the saved time and gas, combined with the reduced emissions, make this a good investment.

What About Hybrids and EVs?

Yes, hybrids and EVs have technology that helps with the stop-go-stop-go of city driving. With regenerative braking, you don’t waste all of that energy when stopping, and you get to use that energy when you take off again. Unlike ICE vehicles, they don’t idle, and that helps, too.

Sadly, we run into TANSTAAFL (“There Ain’t No Such Thing As A Free Lunch). Regenerative braking is less then ⅔ efficient. When you run the electric motor(s) as a generator, there is some energy loss. When that generated electricity gets put in the pack, there is some loss to heat. When you take that energy back out to accelerate again, there’s more heat loss, and loss again when you use it to turn the electric motor(s). By the time that energy makes the “round trip”, you’re still better off than an ICE car, but you’ve still lost precious energy and range.

When all is said and done, even hybrids and EVs benefit from properly timed lights. The transition to electrification is no excuse for leaving lights unsynchronized.

As we’ve learned from the climate change debate, identifying answers is the easy part. It’s easy to say “Put up more solar/wind and batteries.” and “Switch to electric vehicles.” Actually getting people to do it is the real challenge. There are always practical and political challenges in the way.

What do you think we can do in our cities to get more lights synchronized? Let’s discuss this more in the comments below!