I've come up with a set of rules that describe our reactions to technologies: 1. Anything that is in the world when you’re born is normal and ordinary and is just a natural part of the way the world works. 2. Anything that's invented between when you’re fifteen and thirty-five is new and exciting and revolutionary and you can probably get a career in it. 3. Anything invented after you're thirty-five is against the natural order of things. —Douglas Adams

I’ve come up with a set of rules that describe our reactions to technologies:

1. Anything that is in the world when you’re born is normal and ordinary and is just a natural part of the way the world works.

2. Anything that’s invented between when you’re fifteen and thirty-five is new and exciting and revolutionary and you can probably get a career in it.

3. Anything invented after you’re thirty-five is against the natural order of things.

Older, right wing voters are the least likely to accept the reality of climate change. Not to say that all older people deny climate change and all younger people accept it, but in aggregate, younger people are more likely to acknowledge the scale of the existential threat we are facing. It’s a well documented phenomenon that younger people in general are more progressive, but facts about how the climate is already affected by global heating and what’s coming are there for all who wish to see. Nobody should be rejecting the science.

Considering the crazy nonsense the right peddles, from abject denial to threats of cannibalism, many of them truly believe and give legitimacy to the lie that getting off oil will doom us all. Why is this? Part of this is fear of progress — if we get off oil, they think life will change for the worse (quite the opposite). Undoubtedly, other parts of this include oil company contributions to right-wing candidates, car companies that fear the creative destruction of EVs, and governments fearing change and perhaps lost revenue sources. Finally, part of this may be built into human nature.

As children we learn about the world around us as we grow up. From formal education to informal exposure to the world, we learn about everything from what money is, to how to prepare food, to what jobs people do, to what culture you’re a part of. We learn what is and is not acceptable behavior. We learn about technology that is in general use (not so long ago, VHS tapes and cassettes were how we viewed media, and no one could program the time into a VCR; today, most kids have never seen a VHS tape). There is a facet to understanding paradigms that gets more difficult as we get older.

At a certain point, things become known to us and comfortable, and it seems beyond that point new things start becoming “foreign” and “unnatural.” Almost every adult will complain that kids today have no sense or that their music is awful, but it’s more than that, and this fear of technological change is a factor we have not fully appreciated. Of course it does not help that an entire political philosophy claims reality is fake as an excuse to maintain the status quo, so that they can abuse us financially (trickle-down economics, oil company profits over human life, etc). Also, social progress is feared, with acceptance of others (races, religions, etc.) actually an antithetical concept to many older people who “lost” the battle regarding broader social inclusion and equal rights. Remember, it was not that long ago that lynchings were commonplace. Many are still alive from that era. Culture is self-reinforcing, which is also a reason why progress is so hard to accomplish — the status quo has great sway because we unconsciously police others and ourselves while everyone else polices us and themselves. No one is supposed to step outside our cultural norms. 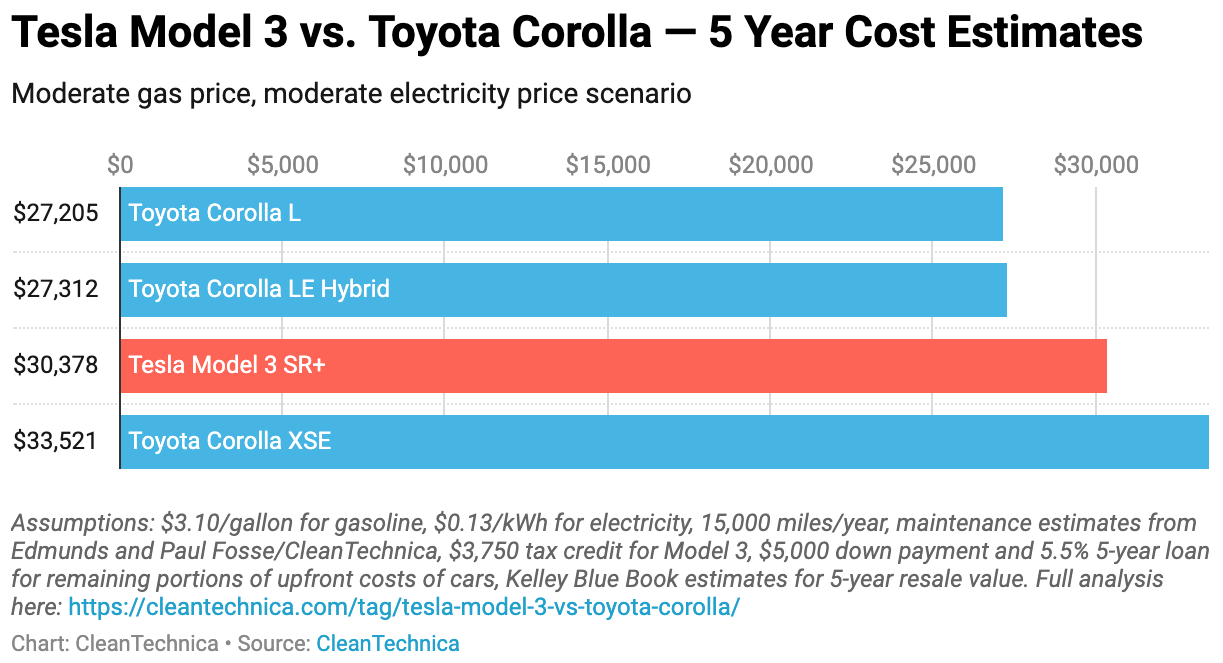 As an aside, CleanTechnica has been publishing a series of articles comparing the total cost of ownership (TCO) of the Tesla Model 3 and various mainstream gasoline-fueled vehicles. In many of these cases, the Model 3 wins, and in some cases, by huge margins. All of these articles explain their methodology clearly, but you can see some — like the recently published comparison to the Toyota Corolla — really strike a nerve and cause strong backlash. The issue is that people don’t want to know that such disruptive change is coming. They are comfortable with the status quo and fear that change will be uncomfortable or harmful or dangerous.

Practically speaking, nothing has changed in the past week — the Corolla is just as widely available, its MSRP is the same as it was, and its tech is just as obsolete as it was before the article was posted. But the fear of being supplanted led to a great many comments perpetuating misinformation, parroting right-wing climate denial arguments, and attacking the methodology (even though the author explained the sources, explained the rationale, and even provided a Google spreadsheet so everyone could run their own scenarios to fit their situations).

That was cultural status quo policing in action. Did the TCO articles suddenly hit a breaking point? Or perhaps this is a vehicle model people feel extra protective of, which led to the escalated backlash?

[Editor’s note: One reason for the higher than average number of unhappy commenters was simply that the article got a lot of attention — nearly half a million views — which meant more were coming from outside our CleanTechnica bubble and there was simply a statistical factor at play. Nonetheless, I did find the backlash a bit surprising and more abundant than similar TCO articles that got a large number of views.]

Fear of change is certainly not limited to climate change and EVs. We should not forget that many technological advancements brought fears of progress — from cell phones causing cancer (notice how the fear came out as soon as they appeared, when no one could have known they caused anything since there was no time for data to accumulate or enough experience for scientific conclusions), to microwaves (causing cancer and exposing you to radiation), to wind turbines (cancer was again the concern even though motors in products we all grew up with and that expose us to stronger EMFs due to their proximity don’t cause cancer — from refrigerators to washing machines to your car’s alternator, you are getting more EMFs from them than you are from being in visual range of a wind turbine), to CFL bulbs (because of potential exposure to mercury even though those same people didn’t seem worried about coal plants spewing exponentially more mercury into the air), and so on.

New technology brings fear of change and BS is invented to rationalize that fear and keep us busy refuting it while slowing down progress, often by years or decades. All in the hope of preventing progress altogether, which fortunately almost always fails.

On the flip side, it’s interesting how much people are used to unnatural things simply because they grew up with them and believe them to be normal. Gas and diesel vehicles have many facets that did not exist in horse-drawn carriages nor exist in electric vehicles. Normalized crazy things like constant oil changes, air pollution/smog days, pumping gas, the smell of pollution fumes as you walk down the street, negative health effects from burning these fossil fuels, excessive noise pollution, expensive repairs such as engine and transmission replacements, low reliability of many vehicles, 10–15 year expected lifespans, and so on. Not to mention military spending for securing access to oil. Despite all of these detriments, many are wedded to their familiar fossil-powered pollution-emitting machines. They’ve been used for generations, so the rationale is that the devil you know is better than the devil you don’t (want to) know.

Just recently, I came across this article about merging the old with the new in design in order to get acceptance for new products and new paradigms. Well worth the read.

In conclusion, we are not just fighting abject denial or special interest greed money. We are also fighting a force of inertia — our bias for the comfortable and familiar, a facet of human nature that we should take into account when formulating our strategies in climate and cleantech messaging. The sky will not fall if we change our sources of power, since electricity will remain electricity. Cars will not be impossible to buy or fuel and will in fact cost less. Charging is not a big deal, as it generally happens while you’re asleep, while you’re at home doing other things, and while you’re working (like a smartphone). Or, if you don’t have a home charger, it can be done while at the grocery store. On road trips, it generally happens while you’re taking a bathroom break or grabbing a bite to eat.

Going further, Tesla vehicles are getting Atari and other games to play while you charge — if you have the extra time.

If you can’t drive at some point in the future, self-driving capability means the car will get you where you need to go even safer than if you drove yourself. Sometimes, change is not something to fear, and the future can be better than what you’re used to.