Electric car batteries can catch fire. Okay. They always make headlines. There are 500 gasoline fires a day and few of them ever make the news. It's time to take a breath and get over the fear of electric cars,

A previous version of this story reported 500 gasoline fires a day based on figures over a three year period. The author neglected to divide by three. The actual number should an average of 166.7 gasoline fires per day. Steve regrets his inability to do simple math.

You see the headlines every day. Here’s one from the Herald in Everett, Washington, dated June 1, 2019: “Electric Car Batteries Can Catch Fire Days After An Accident.” Here’s another from the Mercury News dated June 2: “Two sisters trapped in burning car, one dead in collision with Tesla in downtown Berkeley.”

Now let’s be very clear. The first story is about the special challenges first responders face when they have to deal with an accident involving electric cars. Those challenges are very real and emergency personnel absolutely need to know how to deal with them.

The second story is tragic. Two people were trapped in a burning automobile and no one should make light of how horrible that must be. But the headline suggests it was the Tesla that caught fire. You have to read the story to find out it was actually a Ford Fiesta that burst into flames after being rear ended by a Tesla.

You have to read even further to discover the Tesla driver apparently suffered a debilitating medical issue which precipitated the collision with the Fiesta. The passengers in the Fiesta were seriously hurt or killed. The passengers in the Tesla largely escaped without injury. The focus of the story should be on Ford building a car that explodes in a rear-end collision and the safety of the Tesla, not that a Tesla was involved in a fatal collision.

A report in The Guardian last week warned that people all across the UK are risking injury and fires by plugging in their electric cars at home using extension cords because of the lack of adequate chargers in that nation. How many stories have they published about the risk of smoking at gas stations?

According to a recent FEMA report, “from 2014 to 2016 an estimated 171,500 highway vehicle fires occurred in the United States, resulting in an annual average of 345 deaths; 1,300 injuries; and $1.1 billion in property loss. These highway vehicle fires accounted for 13 percent of fires responded to by fire departments across the nation.”

The point is, the vehicles we use to get from Point A to Point B all rely on large amounts of stored energy, whether it is in liquid form like gasoline or in the form of electrons stored in batteries. We think nothing of it until something goes wrong.

The news media likes to focus on the dangers of electric cars while ignoring that there are more than 150 fuel fires in vehicles in America every day. Whether that’s because of the “If it bleeds, it leads” mentality in the news business or because of the influence of traditional automakers and behind-the-scenes actors like the disinformation network sponsored by the Koch brothers, the impression the public gets is that electric cars are scary, potentially dangerous devices. Better think twice before buying one.

All new technology is scary. But the risk of fire while driving a fossil fueled car is much greater than it is with an electric car. We need to take a breath and calm down about battery fires. Yes, they do happen and, yes, they are frightening. But they are relatively rare, despite what the news media would have us believe. Drive on electrons and be happy. When it comes to fires, you are safer in an electric car than in a conventional car. The technology replaces the volatile and highly flammable organic solvents found in electric vehicle lithium-ion batteries with saltwater to create a safer and more... The arena is all set up, the audience is excited, and the Tesla Model S starts its short run — hits a boulder, rolls... 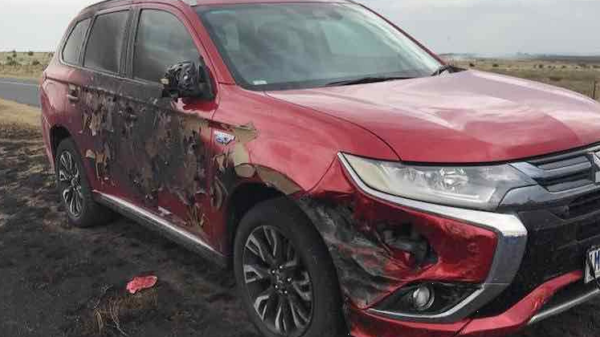