As clean energy advocates urge retirement of fossil fuel power plants, securitization has become a billion-dollar word with huge implications for who will pay for and who will own the clean energy future.

Already, securitization has shown up in several state clean energy laws. Colorado legislators have been refining a power plant securitization bill (HB 1037) several times this session. In New Mexico, the “Energy Transition Act” signed in April 2019 includes securitization of retiring Public Service Company power plants. In Florida, Duke Energy has cut the costs of paying off retired power plants with securitization powers enacted over a decade ago. The Colorado bill sponsor is “‘actively talking‘ to colleagues in Minnesota, Utah and Montana about the proposal.”

So, what is securitization, and how does it play a role in a clean energy transition?

Update 5/21/19: an expert reader got in touch to suggest my estimated utility cost of capital (5 to 6%) was too low because I underestimated the utility’s borrowing rate and ignored how tax liability increases costs. The text has been corrected to 8 to 9%. For more on this calculation, see page 55 of RAP’s Electricity Regulation in the US: A Guide (Second Edition).

Securitization is a fancy term for loan refinancing. It works much like mortgage or student-loan refinancing does, addressing both the outstanding principal owed and the interest rate. If done right, it can lower costs for utility customers and encourage early retirement of coal or other fossil fuel power plants.

Securitization works because utilities tend to have a high costs. An investor-owned utility in good financial health can raise money from shareholders and banks for a combined interest rate of about 8 to 9%. Although securitization methods differ, they often involve substituting customer-backed or government-backed dollars for utility equity and debt, with interest rates closer to 3 or 4 percent. 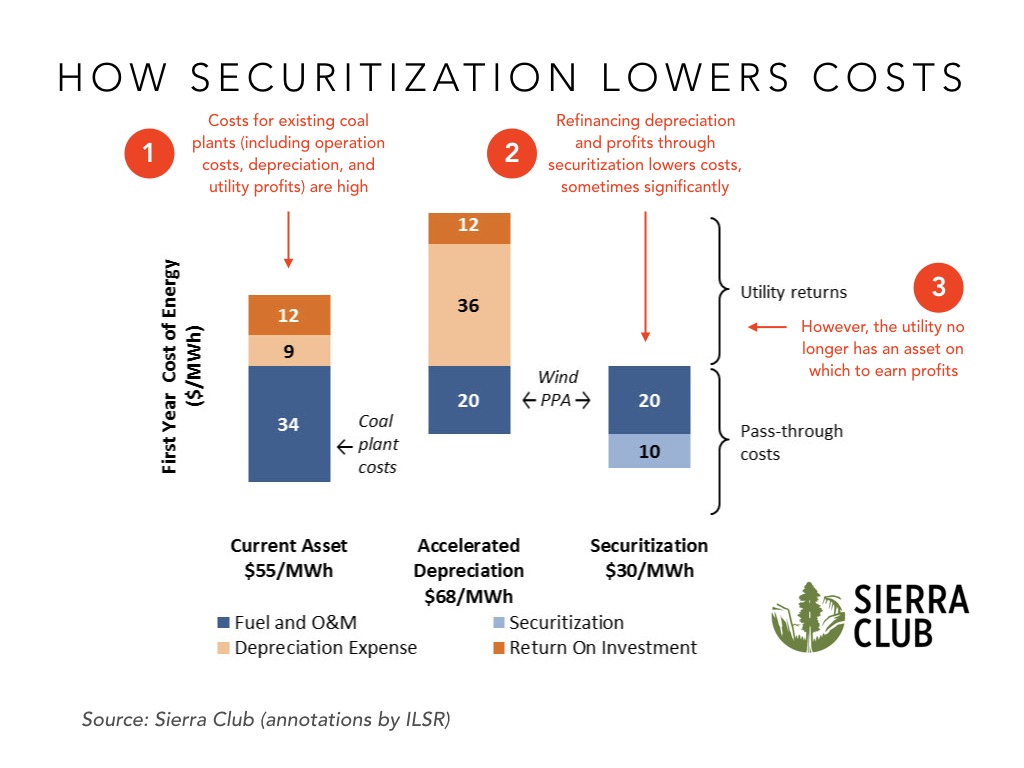 The savings are more than theoretical. “An analysis by [the Rocky Mountain Institute’s Uday] Varadarajan of possible Minnesota coal plant closures found that using the standard accounting tools of accelerated depreciation over five years and a regulatory asset would cost $29 a megawatt-hour (MWh), while securitized 20-year bonds would cost $5 a MWh — a savings of $45 million.”

In some cases –– like the Colorado bill mentioned earlier –– savings aren’t just passed through to customers. Colorado’s law would set aside funds to smooth the transition for power plant communities that lose a major employer. Writing for Greentech Media, Justin Gerdes explains that, “Under the bill, 15 percent of the net present value of savings generated by the closure of a power plant — such as fuel not burned, as well as avoided maintenance and operating costs — would be directed to a new seven-member, governor-appointed body, the Colorado Energy Impact Assistance Authority, to be used for transition assistance for workers and communities.”

How Much to Pay Utilities for Past Investment?

While few disagree with the notion of lowering interest payments with customer- or government-backed bonds, a major concern is how much principal –– how much of the remaining value of a power plant –– to refinance. In other words, how much are aging coal power plants worth?

The size and timing of power plant improvements complicates this calculation. Unlike a house, where adding a deck might change the value but the mortgage stays the same, utilities effectively take out a new mortgage on every improvement they make. Since a plant opened, utilities likely have replaced turbines, installed pollution controls, or made efficiency upgrades. Each time, as shown in the following chart, it sets a new schedule for retiring debt that may extend for years or decades beyond the present day. 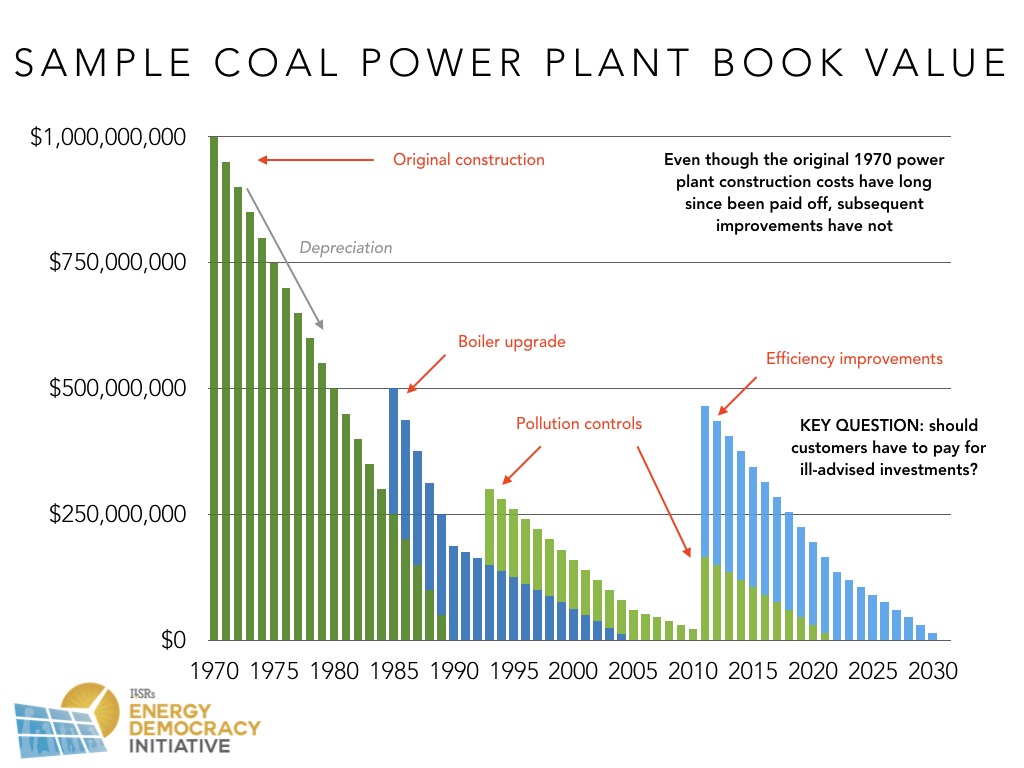 The key question is, in utility regulator speak, “prudency.”  Should customers have to pay for ill-advised or imprudent investments? The law obligates customers to pay the cost of grid infrastructure built by monopoly utilities only if it can be shown to be a wise investment.

For example, was it a wise investment for Xcel Energy to pour nearly $1.2 billion into pollution controls and a new generating unit at its Comanche coal-fired power plant in 2010? With the energy market evolving rapidly at the time, how much of the $200 million that Xcel utility executives chose to spend on the aging units should be paid for by customers, and how much should be chalked up to a poor investment decision?

Securitization may allow for “socialized risk.” Whereas most entrepreneurs or companies making a business decision take on the risk that their investment will fail, most utilities being considered for securitization refinancing are government-regulated monopolies. If regulators allow, utility shareholders can push the cost of poor utility investment decisions onto utility customers by asking for customers to pay for the full value of bad investments.

Critics of the New Mexico Energy Transition Act have highlighted this very issue. New Energy Economy called the securitization deal that the state passed into law in March 2019, a “blank check,” noting that it provided the utility 100% recovery of the remaining value of all their assets, including profits for shareholders. Securitization laws in other states allow state regulators to review the amount of reimbursement utilities receive. The New Mexico law strips regulators of that oversight role.

Do Utilities Deserve a Profit Guarantee?

In securitization discussions, lobbyists for investor-owned utilities frequently request special treatment. Namely, they want guaranteed utility ownership of any power plant built to replace the refinanced and retiring power plants. Remember the third note from the chart illustrating how securitization works? Retirement of costly power plants saves customers money, but it means “the utility no longer has an asset on which to earn profits.”

An ownership guarantee means profits for utility shareholders, but it can come at a hefty price premium for electricity customers. Mariel Nanasi of New Energy Economy shared analysis with New Mexico legislators suggesting that utility-owned replacement renewable energy will cost customers 50% more than competitively bid power. Despite this warning, legislators allowed the company to own all of the necessary replacement power for retiring coal power plants.

In Colorado, legislators have drawn up a compromise. In his coverage for Greentech Media, Gerdes writes, “As a sweetener for the utility to give up the equity in a rate-based power plant, HB 1037 permits utilities to own at least some of the replacement generating capacity.” Specifically, it sets a range of permissible amounts. At a maximum, the utility can own energy generation equal to the size of the retiring power plant, sometimes called its “nameplate capacity.” If a 700-megawatt power plant was retired, the utility can at most own up to 700 megawatts. The minimum ownership amount is then based on the capacity of the refinanced part of the power plant. So, if the principal owned on a 700-megawatt power plant was equal to 1/7th of its original cost, the utility would be allowed to own 100 megawatts of replacement power. The following chart illustrates. 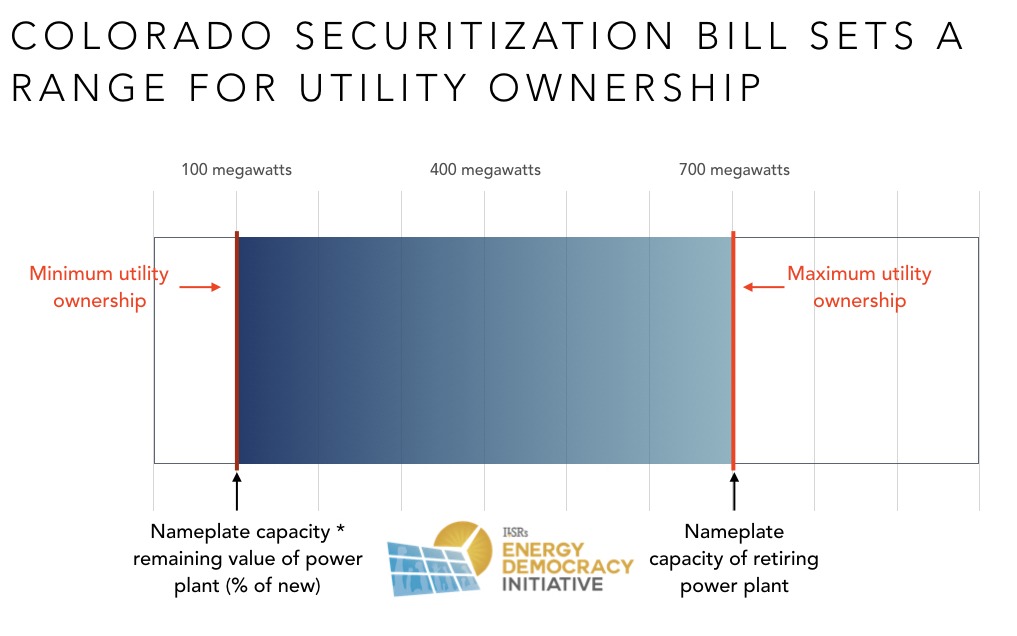 Unless securitization legislation also changes the utility business model, shareholders of any utility covered under this statute –– or in the similar 30 states with regulated monopolies –– will likely earn a 9 to 10% rate of return on any of its capital spent on that replacement power. Under this model, shareholder-owned utilities stand to make a lot of money even if there are less expensive options to expand clean energy. 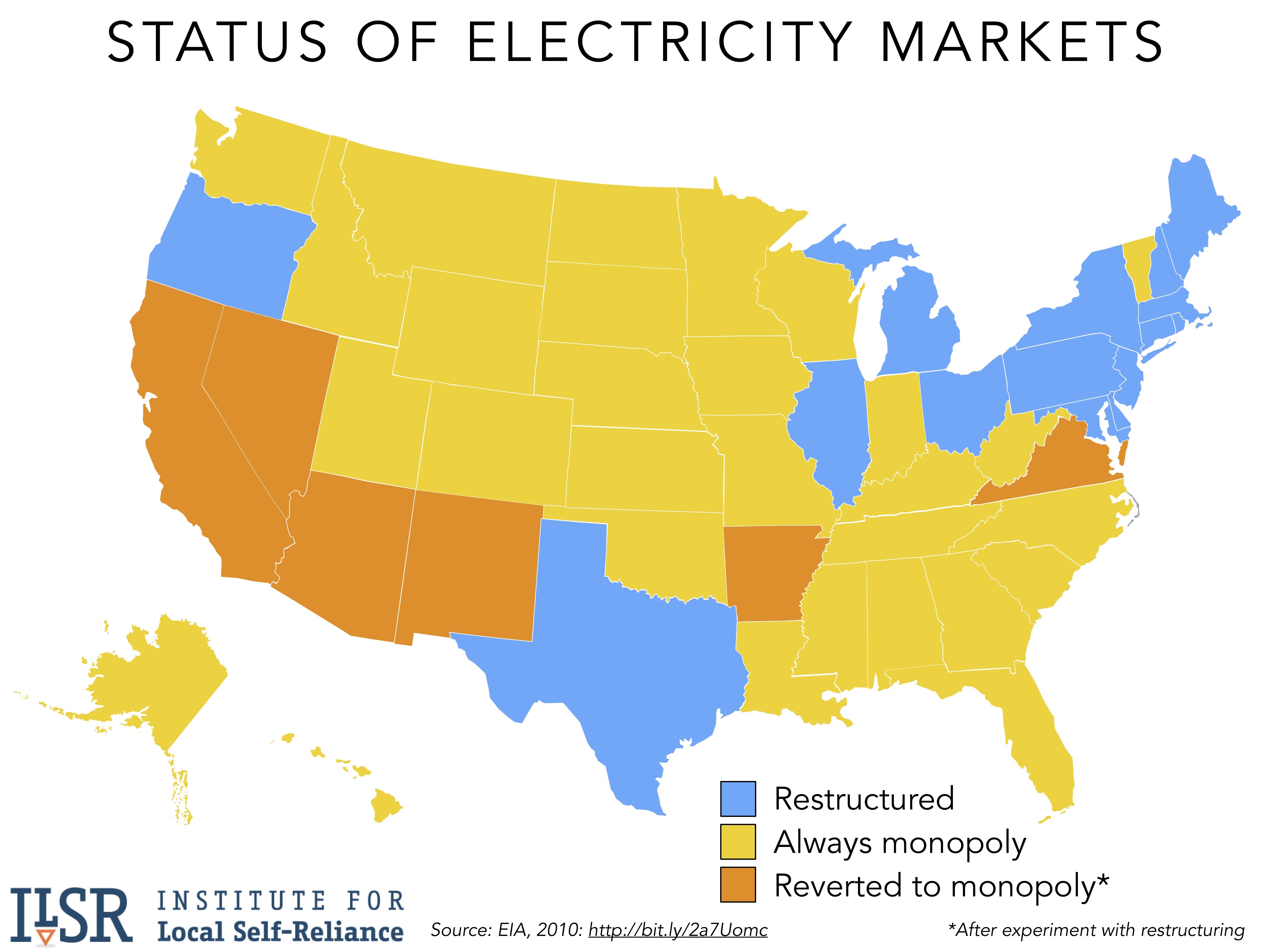 Where Securitization is Up

With a dubious securitization bill passed in New Mexico and a more nuanced one in Colorado, where else is this policy on the table?

Analysis is underway of how securitization might work for a power plant owned by Minnesota Power in Minnesota. Bills are pending in Kansas and Missouri, but not expected to pass. But with millions of dollars in stranded costs at soon-to-retire fossil fuel plants and millions more to be made in developing their renewable energy replacements, expect securitization to be heard at a state capitol near you.

This article originally posted at ilsr.org. For timely updates, follow John Farrell or Marie Donahue on Twitter or get the Energy Democracy weekly update. Also check out over 70 episodes of the Local Energy Rules podcast!

Appreciate CleanTechnica’s originality and cleantech news coverage? Consider becoming a CleanTechnica Member, Supporter, Technician, or Ambassador — or a patron on Patreon. Don't want to miss a cleantech story? Sign up for daily news updates from CleanTechnica on email. Or follow us on Google News! Have a tip for CleanTechnica, want to advertise, or want to suggest a guest for our CleanTech Talk podcast? Contact us here.
In this article:Colorado, financing, Florida, fossil fuels, Institute for Local Self Reliance, John Farrell, New Mexico, power plants, securitization, state policy