I’ll be honest — I wish Porsche would have stuck with the name Mission E for its first fully electric vehicle. It was a much cooler, catchier, more exciting, more intriguing, and more memorable name than Taycan. But I get it, Taycan translates to something like “soul of a spirited young horse,” which is a reference to the essence of Porsche’s logo and the tremendous power of a well designed electric drivetrain. Nonetheless, the switch from “Mission E” to “Taycan” is an ongoing annoyance for me, so I’m using this opportunity to vent.

There’s a reason for name changes like this, though. Production vehicles are often a bit different from the concept cars at their hearts. The Taycan is not the Mission E, which is why it’s the Taycan.

CleanTechnica just received an exclusive spy shot of a Taycan charging at Electrify America’s HQ in Reston, Virginia. Rodney Watkins, founder and CEO of Black Excellence, kindly passed the photo along to me. Rodney’s running an electromobility consulting firm and is interested in connecting with investors and drivers in the DC area for some future projects — if that sounds interesting to you, drop him a note. He’s also been planning to link up with the Tesla Shuttle network I cofounded, which is the reason we were in touch at the time of this lucky spy shot. Without delaying any longer, here it is:

The first thoughts to cross my head while looking at the photo were, “Is that really a Taycan? It doesn’t look much like all of those Mission E images I’ve seen, and are those tailpipes?”

However, it is indeed the Taycan. I snooped around and found European Taycan spy shots from major auto outlets Motor1 and Carbuzz. They show the same car, fake tailpipes and all. (Note: the Taycan does look a bit cooler from the front and sides than from the back, with more resemblance to the original Mission E concept.) Digging up official Porsche photos of the Taycan (included below) confirmed the same.

Rodney added a few notes regarding the scoop: “I was charging my car at Electrify America’s HQ and saw that they’re updating the chargers along with testing them on the Porsche Taycan test mule that is heavily camouflaged in the photo. I even overheard them say that they had a successful charging session.” So, it looks like Mr. Taycan is almost ready for the USA. 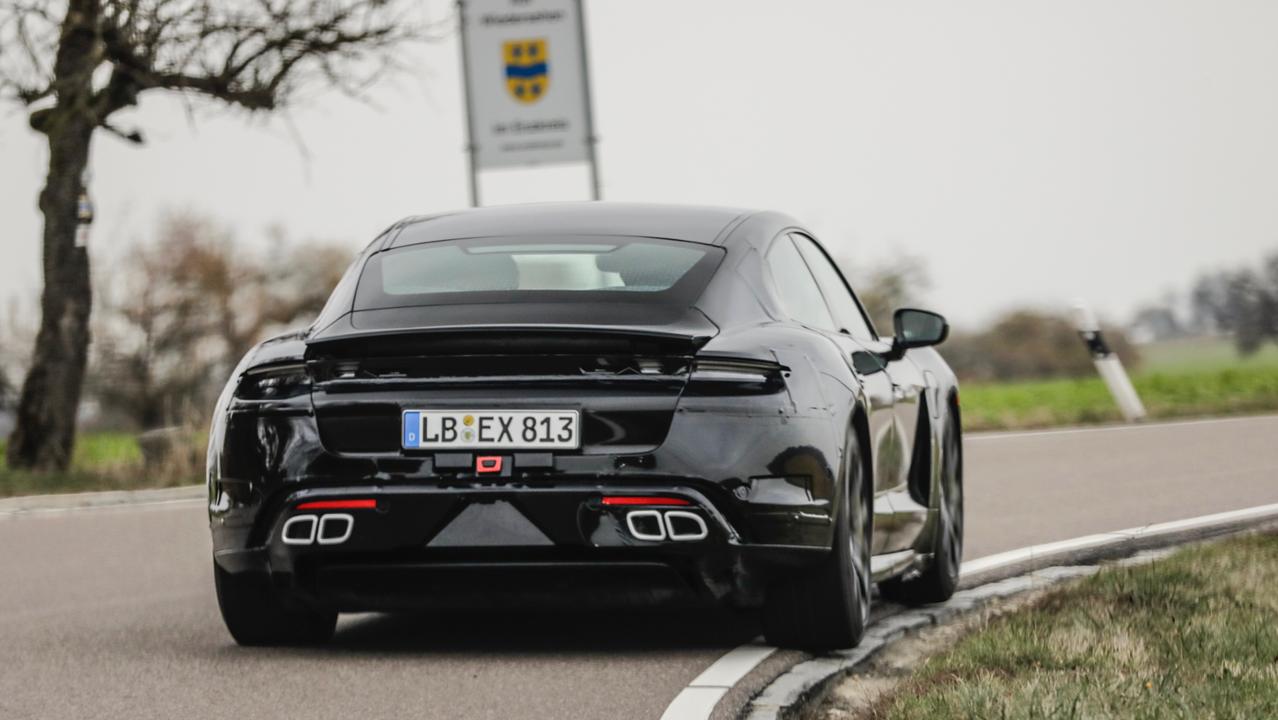 The Taycan may not be the Mission E, but it’s still a hot, compelling electric vehicle that should produce a lot of buzz, so it’s great to catch word of the car charging on this side of the Atlantic. Will the high-end car for powerheads shake the floors of the auto industry and see a flood of sales? Of course not. But it is one of the most compelling electric vehicles, built electric from the ground up, that the market will see in the next couple of years.

More or less exciting, depending on your point of view, EV charging leader ChargePoint just snapped a photo of a Tesla Model Y in the wild — the first Model Y spy shot from the wild that I’m aware of. The mystery of what the Y was doing out and about was quickly resolved by the ChargePoint spies, as it was being chaperoned by a matte Model S camera car.

The Model Y spy shot doesn’t seem to show anything we haven’t seen before, but it is exciting to see one roaming the streets. This electric crossover is going to be tremendously competitive and could one day be the highest selling passenger vehicle in the world. Even if it’s not, it’s going to be a bloody popular CUV, so it will be fun to look back on this first spy shot some day and reflect on how far the Y — and Tesla — travelled.

Run across any other good spy shots recently? Drop them in the comments.

Have a tip for CleanTechnica, want to advertise, or want to suggest a guest for our CleanTech Talk podcast? Contact us here.
In this article:Porsche, Porsche Mission E, Porsche Taycan, Tesla, Tesla Model Y

You may recall that Hertz went into bankrutpcy proceedings in mid-2020 due to the COVID pandemic and the resulting drop in economic activity. A...