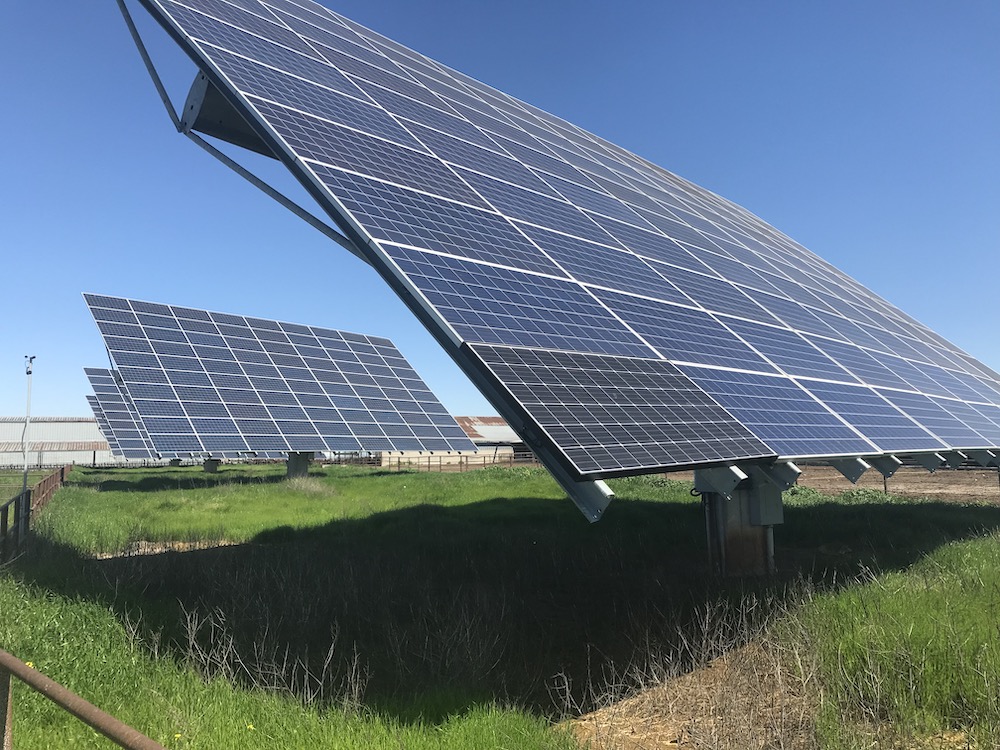 The slow adoption of new technology in the US solar industry provides time for field verification of manufacturers’ claims, which at times sound too good to be true. In the case of large-format dual axis trackers, however, the latest round of annual production numbers is eye-catching: a 27.73% return on investment, or a payback period of only three years.

In 2017, Hogan Manufacturing was spending close to $240,000 a year for electricity for its metal fabrication facility in Escalon, CA, which operates with a crew including computer-aided designers, robotic welders and plasma cutters. The high cost of electricity drove the company’s board to analyze and procure a 730 kilowatt solar array using Mechatron Solar M18KD dual-axis trackers. Several EPCs offered traditional ground mount solar systems of 1.2 megawatt size but the offer made by NextEnergy Systems was the lowest in capital expenditures and best in value, according to Randy Kauffman, CEO of the company.

Almost two years later, Hogan spends around $5,000 a month on demand charges mainly and is saving $230,000 on his annual utility bill, according to the financial data offered by the company’s CFO Joe DeBiasio, which were cross-checked with real data gathered by the system’s SolarEdge inverters (see chart at end). The reason for the massive savings is that the 30.4 kW M18kD Gearless Dual-Axis Trackers operate with a yield 40% higher than fixed-tilt solar arrays and 20% higher than the single-axis trackers that dominate utility-scale solar today.

“It’s the most accurate and effective solar tracking technology we have ever seen,” says Kauffman. “We have experienced how reliable and efficient these trackers are on this project for two consecutive years so we are in a very confident position to promote them in all our jobs that require advanced performance with little or no land use.”

While other companies make small-scale dual axis trackers with only 24 solar panels per table, the Mechatron tracker supports 100 panels on a single pole mount, taking advantage of the late afternoon boost that the design produces compared with single-axis and fixed technology. The M18kD tracker can move with a 340° of azimuthal motion range and a 0-60° elevation motion range, orienting itself towards the sun more precisely than the other technologies.

The M18kD accuracy in locating the position of the sun is based in part on an astronomical algorithm both azimuthally (around its horizontal axis) and in zenith motion (around its vertical axis). Operating in conjunction with digital positioning sensors and digital inclinometer, the system optimizes the maximum power point for electricity production.

The design of the M18kD structure is inspired by the exoskeleton of a beetle, known for its superior strength-to-weight ratio. The structure is a combination of an elliptical tube design (similar to the wing of a wind turbine) and a simple lattice structure, which holds the PV panels.

Hogan’s $1.8 million investment in the tracker farm did manage to take full advantage of the federal solar investment tax credit of 30%, a subsidy that will diminish in stages for future projects begun after 2019. By 2022, the subsidy for utility-scale solar installations will go down to 10%. But that leaves a continuing window of opportunity for the adoption of dual-axis trackers.

“We can design, build and begin operation of our trackers within a matter of months, depending on the permitting hurdles and the utility,” says Fakukakis. “The design features of a patented zero backlash gearless drive mechanism, overload protection, with a lack of wear- and-tear parts and precision parts makes our tracker available over 99.9% of the time,” he says. “As a guarantee to the customer, we offer a 1c/Watt performance warranty, unheard of in the industry,” he adds.

Mechatron Technology is built on a decade of research and development into the highest-yield solar tracker design in the world, notes Fakukakis. The company has over 90 MW of installed capacity across the Europe and the United States, including more than 4,000 trackers in over 900 solar plants. The company cooperates with an international team of over 500 EPCs, serving markets ranging from carports, to corporate installations, to municipal and academic campuses, to agriculture and to utility facilities. Don't want to miss a cleantech story? Sign up for daily news updates from CleanTechnica on email. Or follow us on Google News! Have a tip for CleanTechnica, want to advertise, or want to suggest a guest for our CleanTech Talk podcast? Contact us here.
In this article:Mechatron Solar