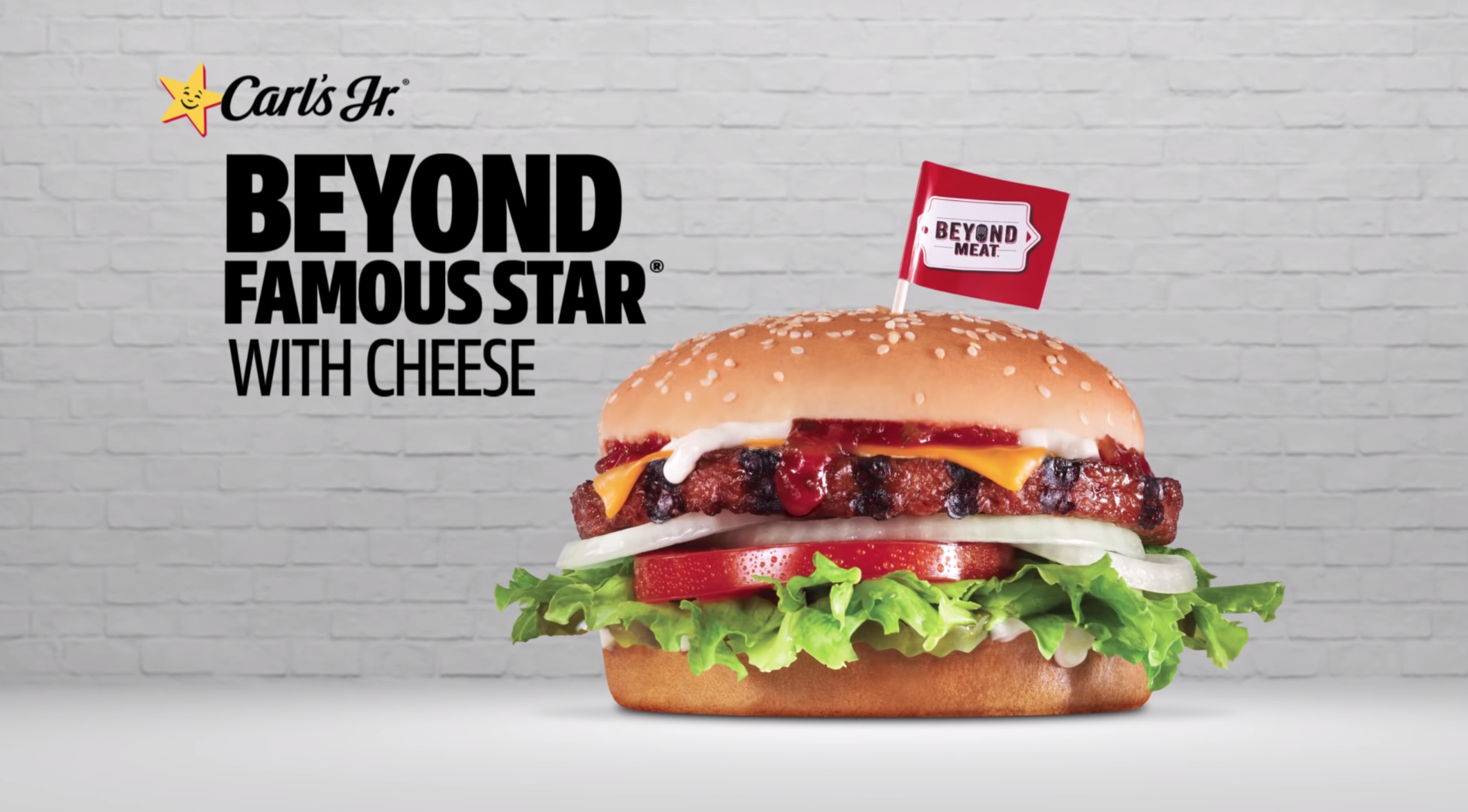 Having grown up with Carl’s Jr burgers being a special treat, I was thrilled at the prospect of a burger with all the flavors and textures I had grown up loving, but with a responsibly sourced, healthier plant-based patty. Right off the bat, it is clear that the company is pushing the burgers. Signs about the Beyond Famous Star adorned the buildings and the gal on the drive through speaker asked if I wanted to try the Beyond Famous Star with cheese.

Not wanting to admit that I only came to the establishment to try the burger, I gave in to her pitch, eagerly asking what it was. She shared that it was just like their normal Famous Star Burger, but with a plant-based patty. Neat! The new plant-based patty upgrade comes at a steep premium , at $7.29 for the Beyond Famous Star with cheese here at my local Carl’s Jr. compared to just $4.39 for the beef version of the Famous Star with Cheese. The patties are also available as a substitution on any of the other sandwiches for just $2/patty, making the nearly $3 increase on the Famous Star with cheese a little silly, but I digress.

On two subsequent days, at two different locations, I indulged in a lunchtime Beyond sandwich. The Beyond Famous Star with cheese tasted like a tasty hamburger. The Beyond Beef patty was a little less juicy than a beef burger, but still had plenty of moisture to keep the overall burger on point. The sauces that were added and the copious vegetables complemented the experience and I finished the burger feeling like I had just eaten a tasty hamburger. The Beyond Beef patties are not so similar in taste or look to beef patties that they would be as easy to fool beef-eaters with, but they are close enough that most people probably would not notice unless you mentioned it.

For my second dive into Carl’s Jr’s Beyond options, I opted for my childhood favorite, the western bacon cheeseburger. As a vegetarian, I also skipped the bacon on this one, but found that I really didn’t miss it. The majority of the flavor and texture in the sandwich comes from the barbecue sauce and the onion rings. Because it has so much more flavor and moisture by design, the flavor of my Beyond western cheeseburger was simply on point. It really did bring me back to my childhood, though not quite as intensely as Disney made it out to be in Ratatouille.

Beyond Beef arriving at Carl’s Jr, the Impossible Whopper being pushed out to all of Burger King’s locations in the US, Impossible Foods being rolled out at Qdoba, and of course White Castle making an Impossible Slider are just the tip of what looks like a tsunami of premium plant-based options being rolled out en masse at fast food chains across the United States.

They have realized that offering vegetarian options is not simply a matter of attracting vegetarian customers into their stores, it also lets them eat out with their families. And it’s not just the vegetarians that are eating these beef alternatives. As more and more humans around the world take ownership of the emissions stemming from the food they eat and the health impacts a diet that is high in animal protein has over the years, many omnivores are opting for plant-based proteins as well.

Raphael Thomadsen, an associate professor at the Washington University in St. Louis, researched the fast food industry and found that adding innovative new products to the menu is valuable. “Competition is fierce, and they can beat McDonald’s in terms of innovating to a new and intriguing product,” said Thomadsen. Adding innovative new products serves to not only bring in new customers looking for it, but also bolsters sales of core menu items. “Our study shows that when firms introduce new innovative products, it can help sell their base product,” Thomadsen said. “I expect that this new product may have its own underlying demand, but also will increase the sales of traditional beef burgers.”

The success of early pilots is encouraging as are the wider rollouts of plant-based offerings. What remains to be seen is how the competition will react. How will McDonald’s, Southern California’s iconic In-N-Out, and KFC react to the changes? 2019 is shaping up to be a transformative year for healthy eating at established fast food chains and all signs point to these early movers being just the beginning.