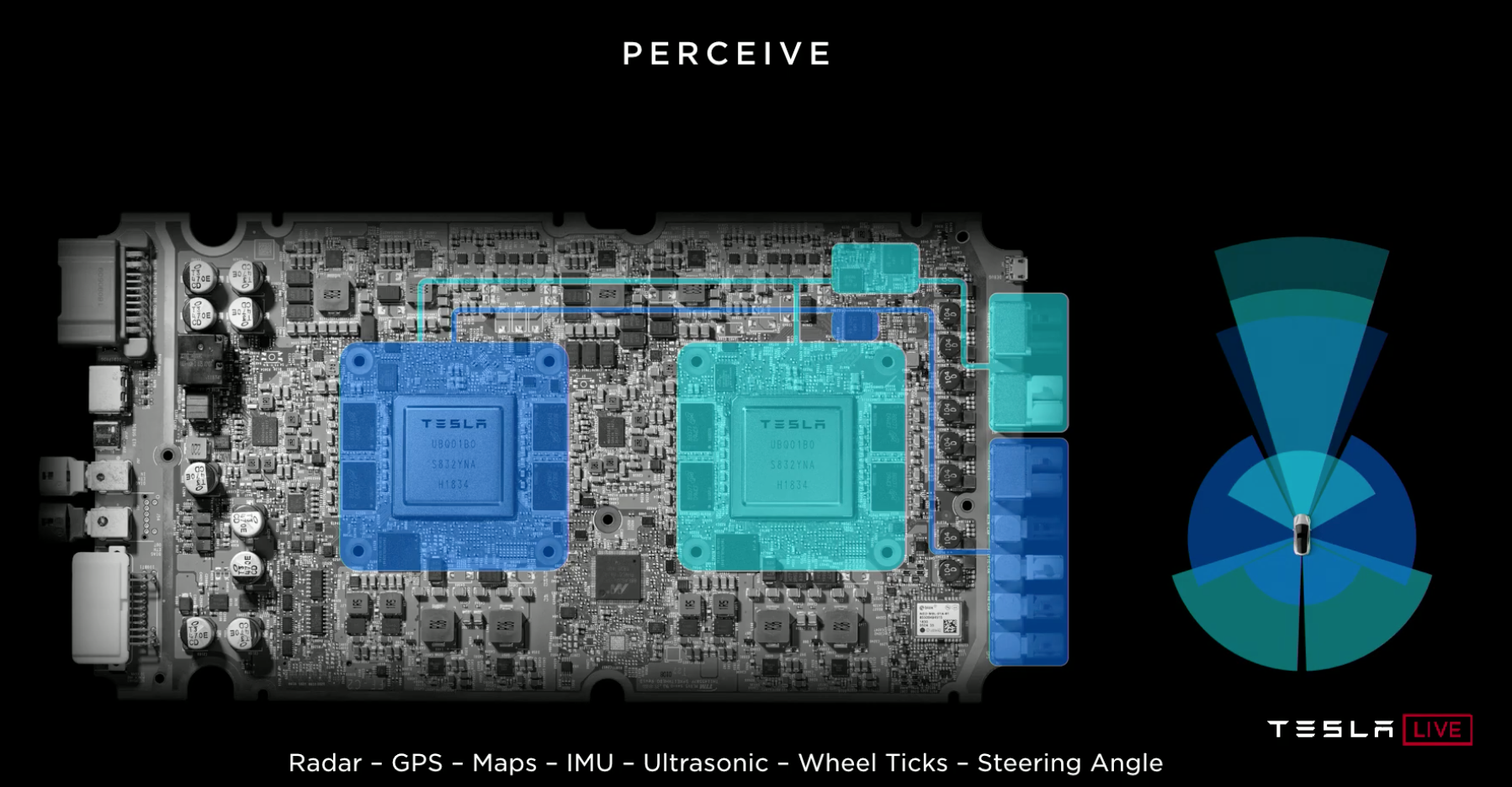 Below the video, we’ll be liveblogging highlights from the event (that is, this article is being continuously updated). Enjoy, and let us know anything that catches your eye!

Our version, with the long intro video cut off:

Pete Bannon initially (in 2016) asked Elon Musk if he was really willing to spend the money needed to create a custom system. Elon asked, “Well, will we win?” Pete said yeah. So they did it.

The Full Self Driving (FSD) computer fits between the glovebox and firewall in the front of the car.

Elon notes that any component in the system — or the whole computer — could fail and the car could keep driving. Elon says this is probably the most important slide:

Some summary notes from Kyle Field:

“This is all done at a modest cost while delivering a fully redundant computing platform to all of Tesla’s vehicles currently in production.”

General summary from Kyle: “Our shit is really, really fast and we built it better than anyone else.”

Elon notes that Tesla finished this design 1½–2 years ago and then started on the next system design. They are not talking about the next design now, but they’re about halfway through it.

“An enthusiast Intel desktop i7 processor with 8 cores has 3 billion transistors, Tesla’s new chip has 6 billion. But that is till less than some crazy 18 core Intel ships like Skylake-X which has 8.33 billion transistors. An iPhone has about 2 billion.

“So SRAM is much faster but is more expensive and has less storage compared to DRAM. Elon Musk emphasizes, “Lidar is a fool’s errand. And anyone relying on Lidar is doomed.”

He also noted, “The power of the system has a massive impact on city range, which is where we think most of the robotaxi market will be.” Tesla is estimating a 12% cost savings compared to the previous NVIDIA system.

Further, “I think if somebody started today and they were really good, they might have something like what we have today in 3 years, but in 2 years, ours will be 3 times better. … A year from now, we’ll have over a million cars with Full Self Driving computer, hardware, everything.”

He also added that Google has a huge search advantage because people use it.

Now, on to the software/AI!

Basically, Andrej Karpathy is sharing how Autopilot/FSD works, how the neural net (NN) works, fleet learning, and a handful of edge cases that explain why you need real-world data.

Elon finally answers my question (from the past few years) definitively. Whether Autopilot is off or on, the neural network is watching and learning in order to improve Autopilot/FSD software. To clarify, I’ve been asking experts in the field how much Tesla uses this “shadow mode” or “ghost mode” to learn and improve the Autopilot suite. No one has known, from the info I’ve gathered. It appears here that Elon is saying the shadow/ghost mode is learning about everything the same as if Autopilot is turned on. This, to me, explains why the Tesla Autopilot suite is so much better at driving smoothly, like a human, than similar systems in other automaker vehicles.

Elon: “The crazy thing is: the network is predicting paths it can’t even see with incredibly high accuracy. It can’t see around the corner, but it’s saying that the probability of that curve is extremely high, so that’s the path, and it nails it.” This is happening from NN/fleet learning from normal human drivers. The software is learning how people drive such routes (indicated in a video example in the presentation).

Elon: “We do have a major program at Tesla which we don’t have enough time to talk about today called Dojo. That’s a super powerful training computer. The goal of Dojo will be to be able to take in vast amounts of data and train at a video level and do unsupervised massive training of vast amounts of video with the Dojo program … Dojo computer.”

Regarding other self-driving vehicle firms using lidar, Elon notes strongly, “they’re all going to dump lidar, mark my words. … In cars, it’s freakin’ stupid. It’s expensive and unnecessary, and as Andrej was saying, once you solve vision, it’s worthless. So you have expensive hardware that’s worthless on the car.” In the middle of that quote, Elon explained that SpaceX developed its own lidar to dock to the space station, and Elon led that project, so he doesn’t have a fundamental prejudice against lidar or lack of experience with it — he just thinks it’s stupid to use in cars.

“We expect to be feature complete in self driving this year, and we expect to be confident enough from our standpoint to say that we think people do not need to touch the wheel and can look out the window sometime probably around … in the second quarter of next year. And we expect to get regulatory approval, at least in some jurisdictions, for that towards the end of next year. That’s roughly the timeline that I expect things to go on. …

“Probably for trucks, the platooning will be approved by regulators before anything else. If you’re long haul, doing long-haul freight, you could have one driver in the front and then have four semis trailing behind in platooning manner. I think regulators will be quicker to approve that than other things.”

Stuart Bowers, VP of Engineering at Tesla: Navigate on Autopilot lane change without confirmation: “You can sit there, relax, put your hand on the wheel and just oversee what the car is doing. We’re actually seeing over 100,000 automated lane changes per day on the highway system.”

Elon: “In order to have a self-driving car or robotaxi, you really need redundancy throughout the vehicle on the hardware level.”

Elon: “The whole system, from a hardware standpoint, has been designed to be a robotaxi since basically October 2016, when we rolled out Autopilot 2.”

Elon: “Next year, we’ll expand the product line with Model Y and Semi and we expect to have the first operating robotaxis next year, with no one in them … next year.”

Elon: “Any customer will be able to add or remove their car to the Tesla Network. We expect this to operate … it’s sort of a combination of an Uber and an AirBNB model, and Tesla would take 25 or 30% of the revenue. And in places where there aren’t enough customer cars, we would just have dedicated Tesla vehicles.”

Highlighting how suddenly this will all materialize, Elon said, “The fleet wakes up with an over-the-air update.”

Elon: “You’d be able to summon the car from the parking lot and just get in and go for a drive. … The fundamental utility of the vehicle increases by a factor of 5.”

Elon sees lidar and HD maps as false solutions that will just slow down your progress eventually. “If you need a geofenced area, you don’t have real self-driving.”

Tesla will favor production of cars with relatively smaller battery packs in order to maximize the fleet size and miles/km driven.

Tesla is designing cars for a million-mile life, like commercial semi trucks.

“The current battery pack is about maybe 300,000-500,000 miles. The new battery pack that is probably going into production next year is designed for 1,000,000 miles of operation with minimal maintenance. We’ll actually be adjusting tire design and really optimizing the car for a hyper-efficient robotaxi.

A financial matter: “Once the robotaxi fleet is active, I expect to be extremely cash flow positive.”

Elon Musk: “The fundamental message that consumers should be taking from today is that it’s financially insane to buy anything other than a Tesla. It will be like owning a horse in 3 years. Fine if you want to own a horse, but you should go into it with that expectation. If you buy a car that does not have the hardware necessary for full self driving, it is like buying a horse. And the only car that has the hardware necessary for full self driving is a Tesla.”

Have a tip for CleanTechnica, want to advertise, or want to suggest a guest for our CleanTech Talk podcast? Contact us here.
In this article:Tesla, Tesla Autonomy Day, Tesla autopilot