Pro-nuclear advocates have a few go-to cliches in their rhetorical kitbag. A big one is that the public has an irrational fear of nuclear energy and it’s led to nuclear shutdowns and excessive regulation. Let’s examine the historical record of nuclear generation to see if it’s possible to identify the footprints of public fear and related policy.

We’ll approach this with a set of charts of data related to nuclear generation since the 1970s and ask a series of questions about them. Let’s start with US public opinion polling conducted annually by Gallup.

Does the 2001 low opinion of nuclear correlate to a major nuclear safety issue?

Three Mile Island occurred in 1979 and Chernobyl occurred in 1986. There appears to be no public perception driven by outside causes related to nuclear incidents that would lead to this low level of support across the board.

Why did Democrat and Independent support for nuclear increase and Republican support decrease in the aftermath of Fukushima?

The Japanese Fukushima nuclear disaster occurred in 2011. The next year in polling, Republican support dropped by 9 points. Democrat support increased by 7 points. Independent support increased as well. If public fear of nuclear radiation and accidents was a driving cause of liberals and progressives being against the technology, then support for it should have plummeted on the left and in the center, yet the opposite occurred. Republicans are traditionally the largest supporters of nuclear energy yet their support plummeted. Was that because their fears increased, or was it more likely because of the very significant economic fallout and brittleness of a significant dependence on nuclear generation?

Was the 2016 across-the-board drop in US support to a historic low due to nuclear fears?

Fukushima was five years in the past. There were no major new incidents. There were no external causes for people to be concerned about nuclear in this time period. But other changes were occurring. During the same period, bi-partisan support for renewables instead of fossil fuels exploded. Several years of seeing massive reductions in renewable prices, large-scale deployments of renewables without grid instability, unconventional oil and gas clearly lessening dependence on the Middle East, Texas crowing about its renewables and increasing grid stability and economic benefits of renewables in Republican-leaning rural states led to Republicans, Democrats and Independents all strongly favoring renewables to unprecedented levels. What was driving preferences for fossil fuels as an energy solution was the apparent miracle of fracking and increased geo-political energy uncertainty. Now the large majority of Americans understand that they are no longer dependent on the Middle East and that renewables are the viable path forward.

Let’s shift to the global perspective. This is a World Nuclear Association chart showing total TWh of nuclear generation globally from 1970 through 2017. If fear of nuclear were the answer, why did nuclear generation grow more rapidly after Three Mile Island?

It occurred in 1979 yet the following years saw an increase in the growth of nuclear generation after a brief plateau.

If fear of nuclear were the answer, why was nuclear generation annual growth unaffected by Chernobyl?

Why did nuclear generation peak globally in 2005?

Once again, Chernobyl and Three Mile Island were 2 to 3 decades in the past. What occurred in the 2000s that led to a global nuclear slow-down completely absent any external major incident which could induce fear? Was this really a 19-year lag from the Ukrainian nuclear incident? Or was it related to cheaper natural gas and combined cycle gas generators leading to a more competitive form of electrical generation, combined with decades of experience with nuclear construction cost and budget overruns? It wasn’t fear that sidelined nuclear expansion in the 2000s, but economics.

Can we see Fukushima’s impact?

This is the only place where the data shows an impact. Fukushima’s impact is clearly seen, but that’s almost entirely due to Japan’s entire nuclear fleet being taken offline, not due to reactors outside of Japan being shut down. That’s one country responding sensibly to an extraordinary event, one with which it is still wrestling. Japan was receiving 30% of its energy from nuclear prior to Fukushima and shut down every reactor. Some of the rebound in the last couple of years is due to Japan restarting reactors, with 7 having been brought back into operation of the 37 since. Much of it is due to China’s expansion of nuclear, with more on that later.

Is the massive loss of relative generation of world electricity since 1996 due to a safety concern?

The nuclear share in power production declined slowly but steadily from a peak of 17.5% in 1996 to 10.3% in 2017. That’s a 41% decline in market share. In absolute terms it peaked in 2005, but in 1996 it started declining in relative terms. Was the start of the relative decline a full decade after Chernobyl due to fear? Energy policy lags events due to the nature of shifting major infrastructure, but a full decade for any impacts to be seen seems slow even for nuclear energy.

So globally, there aren’t really any visible effects of this alleged fear and related environmental campaigns on nuclear energy. Let’s look at a couple of other countries to see if we can see anything from the data.

This chart is from the Clean Energy Wire (CLEW), a German non-profit foundation funded by Stiftung Mercator and the European Climate Foundation, to provide evidence-based support for journalism about the energy transition. One of the key refrains of pro-nuclear advocates such as Michael Shellenberger is related to GHG emissions spiking after Germany starts shifting away from nuclear. When did Three Mile Island and Chernobyl occur?

Years before this chart even starts. While those significant nuclear incidents loom large in nuclear advocates heads, they aren’t particularly current or relevant. The large majority of the public never thinks about them.

Is Fukushima’s impact possible to see from this data?

Fukushima occurred in 2011. Germany’s greenhouse gas emissions are relatively flat since then, but this isn’t due to the subsequent shutdown of several reactors as pro-nuclear advocates like to assert. The full degree of disinformation being spread about Germany’s energy transition is documented in this lengthy article published recently on CleanTechnica: US Commentators Point At Germany For Bad Energy Policies, But Live In Glass Houses. The short version is that the minor increases Germany saw were entirely due to increases in the transportation sector, while its electrical generation emissions continue to drop and 60 TWh of its dirtiest electricity was solely generated to be sent to other countries, with 25 TWh going to France in net. 3% of its net electrical generation emissions are related to net exports to other countries of electricity. If Germany hadn’t been providing stable electricity to other countries, including France, its total GHG emissions would have dropped, not stayed flat.

Finally, let’s look at China. I developed this chart to highlight the reality of the comparative speed of growth and direction of electrical generation of wind, solar, and nuclear in that country for this article: Wind & Solar In China Generating 2× Nuclear Today, Will Be 4× By 2030. It’s based on the best available public data on wind, solar and nuclear deployments, capacity factors, committed plans, and likely plans.

Is the 2011 Fukushima disaster visible in this data?

No, virtually all of China’s nuclear growth has occurred since 2011.

Are wind and solar exceeding nuclear by so much due to fear of nuclear or excessive nuclear regulation?

This is China. Do you think an authoritarian single-party non-democracy is deeply troubled by public sentiment about nuclear safety? Do you think regulatory concerns will get in the way of centralized decision making about what’s critical for the growth of China?

Let’s end this discussion with this graphic of all the countries with existing nuclear reactors in operation. There are 31 of them right now. Out of 200 countries in the world. That’s 15% of countries with nuclear vs 85% without. 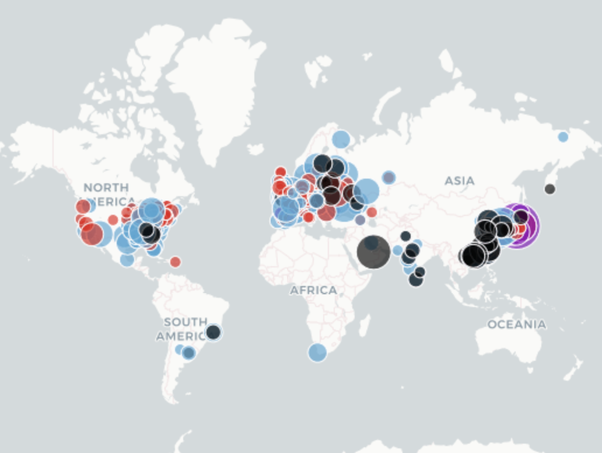 No. Nuclear non-proliferation treaties and proscribed technology agreements prevent innumerable countries from easily gaining nuclear technology. Most nuclear generation technology overlaps strongly with that required for nuclear weapons, which is a major part of the concern. Skills overlap. Fuel processing overlaps. And nuclear reactors aren’t explosive, but are excellent sources of radioactive material for dirty bombs. Improvised explosive devices (IEDs) that are also radioactive is an asymmetrical warfare nightmare. The world doesn’t want most countries to have nuclear technology because large portions of the world are not politically, economically, or socially stable and resilient, and nuclear technology falling into terrorists and dictators hands is a global strategic threat. This isn’t the citizens and countries saying, “Chernobyl and Fukushima have terrified us, please don’t bring nuclear here.” This is the rest of the nuclear world saying, “You can’t have it” for good and sensible reasons.

Of course, the alternative picture of where wind and solar can be deployed has coverage for every country in the world, because they aren’t proscribed technologies or IED threats. If a wind farm fails because a state fails, the only issue is restarting it when the state stabilizes again, not someone stripping off the blades and creating a global terror incident with them.

The point of this Socratic dialogue with pretty pictures is that public concern about nuclear safety is not the limiting factor on increased nuclear generation. Quite the opposite. There’s almost no correlation observable from the data that safety concerns from major incidents have any impact on support for nuclear and rollout of nuclear.

What is apparent is that prior to 2005 most people charged with developing electrical generation in countries around the world realized it was too expensive, too slow to build, too inflexible, and that other alternatives, mostly gas at the time sadly, were cheaper. And that in 2016 to now, most people realize that nuclear is still too expensive, too slow to build, and too expensive, and that wind and solar are radically cheaper and faster to build. And that wind and solar can be built in any country in the world, unlike nuclear.

Fear of nuclear power is vastly overrated as an issue among pro-nuclear advocates. Like conservatives in the USA up to the Secretary of the Interior blaming non-existent eco-terrorists for west coast wildfires, it’s a strawman, a convenient fiction that the nuclear advocates share among themselves to avoid the harsh truth.

Don't want to miss a cleantech story? Sign up for daily news updates from CleanTechnica on email. Or follow us on Google News! Have a tip for CleanTechnica, want to advertise, or want to suggest a guest for our CleanTech Talk podcast? Contact us here.
In this article:chernobyl, China, Energiewende, France, Fukushima, Germany, radiation, safety, shell, Three Mile Island, UK, usa