Welcome to the next issue of China × Cleantech, February 2019 edition. A new year has come and the news keeps flowing. For our full China × Cleantech history, stroll over to the “Future Trends” section of our website. Tesla news in China has centered around the Model 3 and Tesla Gigafactory 3 in February.

Kyle Field reported on the Tesla Model 3 making landfall in China (a couple of times), and Iqtidar Ali published about Tesla prices and trims for the Tesla Model 3. The Chinese Tesla Model 3 Long Range RWD was launched for ¥433,000 ($64,300), but prices have been in flux at Tesla, so keep an eye on the website for the latest.

Kyle Field also reported that Tesla has started an energy conservation assessment with Chinese government agencies for the Shanghai Gigafactory. Chinese media is claiming Tesla Gigafactory 3 will actually be completed in the summer of 2019, much earlier than previously expected. We’ll be sure to publish any notable changes to the schedule in the coming months.

Maximilian Holland reported that electric vehicles sales in January 2019 were around 96,000, and total vehicle sales dropped by almost 16% year over year while EV sales climbed. Based on the previous year’s sales trends, total electric vehicles sales for 2019 could equal 2 million. Furthermore, fossil vehicle sales in the country have seemingly peaked. 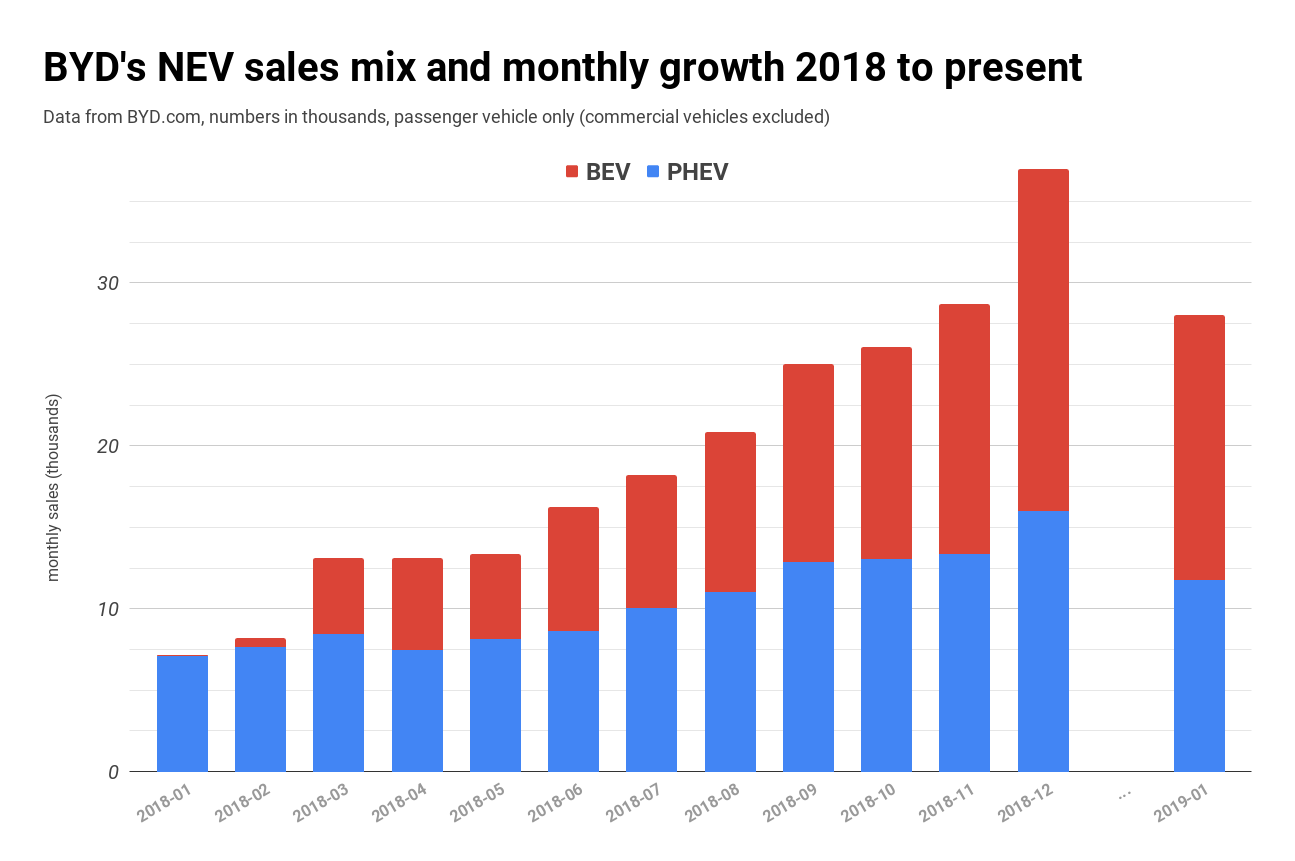 Jose Pontes showed the results of his data collection and analysis of electric vehicle sales data from China as well, first showing that in December 2018, 180,000 electric vehicles were registered. That was the 4th month of 70% year-over-year growth and means that China sold over 1 million electric vehicles in 2018.

Jose Pontes also presented the results of electric vehicle sales data from China in January 2019. The sales figure reached 96,000, which was a 175% year-over-year increase. Additionally, this means plug-in electric vehicle market share was 4.8% of the automotive market.

EV Partner also wrote about 3 electric vehicles from startups/new brands in China that are due for release this year. The first is the DEARCC ENOVATE ME7, which is due in September 2019 and is a luxury SUV. ENOVATE is a new high-end brand from DEARCC which makes affordable, small electric vehicles. Confused? Here are a couple of pictures: The second vehicle is the SF Motors SF5, which is due in Q3 of 2019 and is also an SUV. CleanTechnica was at the unveiling of the SF5 in San Francisco last year. Here are a couple of new pictures: Kyle Field reported on BYD groundbreaking of a 20 GWh battery factory in Chongqing, China. The factory will have eight automated production lines for battery cell production, but it will also turn those cells into battery modules and packs for the company’s vehicles.

Honda and CATL got into some big gigawatt-hour figures as well, agreeing to a contract of 56 GWh worth of batteries within 7 years.

This is an important development, as many detractors of electric vehicles ask, “What about the end of life of the battery pack? Won’t it be thrown away?” This progress shows that we are developing a system for the end of the life of electric car battery packs.

EV Partner also wrote about a report about electric vehicle power battery installations in January. The main takeaway is that 4.98 GWh of capacity were installed, which is a year-on-year increase of about 277%. Many additional details were reported, including news that 101,400 electric vehicles were produced in January.

Kandi, a Chinese electric vehicle manufacturer that was an early leader in the Chinese EV market, recently received approval for US sales. For many, this is an interesting development since it has long been expected that Chinese EV companies would target overseas markets. How will Kandi do? Who will go next?