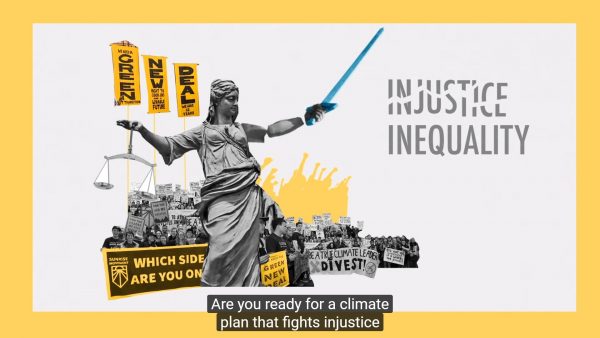 You’ve been hearing a lot about the Green New Deal, but you’re wondering what it’s all about? You can read the full resolution here. Or, if you want a quick and chatty explainer, check out the video on the bottom of this article put together by the folks at The Leap, a climate action group, or the 20 minute MSNBC interview with Rep Alexandria Ocasio-Cortez on the very bottom of this article.

The Leap Manifesto predates the Green New Deal, but the group has eagerly taken up the mantle. Here’s the central core of the Manifesto:

“We could live in a country powered entirely by renewable energy, woven together by accessible public transit, in which the jobs and opportunities of this transition are designed to systematically eliminate racial and gender inequality. Caring for one another and caring for the planet could be the economy’s fastest growing sectors. Many more people could have higher wage jobs with fewer work hours, leaving us ample time to enjoy our loved ones and flourish in our communities.

“We know that the time for this great transition is short. Climate scientists have told us that this is the decade to take decisive action to prevent catastrophic global warming. That means small steps will no longer get us where we need to go.”

So you can see why the Green New Deal has appeal — they’re both running with many of the same proposals. Here’s how The Leap prefaces its Green New Deal video:

“The Green New Deal is an ambitious plan for how we can eliminate poverty and create millions of jobs while tackling the biggest threat of our time: climate change.  It involves massive public investment in clean energy, transit and climate adaptation work. But the vision is bigger than that: it’s about transforming our entire economy to be safer and more fair, and give everyone a better life. First proposed in the U.S., the Green New Deal is now spreading around the world.”

Check out the video — and keep watching this space for news on the Green New Deal, spearheaded by Rep Alexandria Ocasio-Cortez and Senator Ed Markey.

Appreciate CleanTechnica’s originality and cleantech news coverage? Consider becoming a CleanTechnica Member, Supporter, Technician, or Ambassador — or a patron on Patreon. Don't want to miss a cleantech story? Sign up for daily news updates from CleanTechnica on email. Or follow us on Google News! Have a tip for CleanTechnica, want to advertise, or want to suggest a guest for our CleanTech Talk podcast? Contact us here.
In this article:Alexandria Ocasio Cortez, Carbon Emissions, Congress, Democrats, ed markey, green new deal, Interviews, policy, Waste Reduction