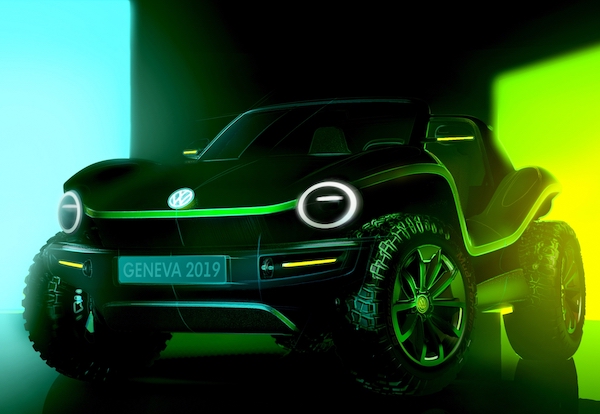 Okay, so we’re still holding out for the electric Thing but for now we’ll settle for a 21st century, EV iteration of the classic American dune buggy, and Volkswagen may just have such a vehicle in its sights. Yesterday the company unveiled a concept EV styled along the lines of the old dune buggies cranked out in the US during the 1960s and 1970s.

If you’re thinking of dune buggies that evoke the Meyers Manx, buckle up and let’s go for a ride.

Why Go Retro On A 21st Century EV?

Any number of EV makers, large and small, are vying to win the Most Slick and Futuristic Style Of The New Millennium Award, so it’s fair to ask why Volkswagen is referencing a style that gained popularity about two-thirds of the way through the last century.

To be clear, Volkswagen insists that its new EV dune buggy sports an updated, contemporary style. Still, the new concept echoes enough of the classic lines to count as retro. We say it’s retro, so it’s retro.

Anyways, there is a method to Volkswagen’s madness, and it has to do with the Meyers Manx. A couple of years ago Collin Woodard of Road and Track introduced a Meyers Manx documentary with an observation that explains the Volkswagen’s strategy:

Created by Bruce Meyers in the 1960s, the Manx used a modified Beetle floor pan, as well as its engine and suspension. Meyers created the iconic, lightweight fiberglass body which could fit bigger floatation tires for tackling shifting sand. The resulting vehicle became an instant off-roading classic.

That thing about one guy creating one unique fiberglass car body is the key. Volkswagen is pitching the new EV dune buggy concept to demonstrate how its Beetle platform can be used to produce relatively small-scale production lines.

Driving over the sand in remote areas like Pismo Beach and the Baja…was a way to hang out, have bonfires, look around, be seen, and, of course, have fun. It was quickly discovered that heavy four-wheel-drive vehicles like Jeeps were not as effective running on sand as was the lightweight VW Beetle. To make the Beetle even better, beach riders fitted wide tires and cut away the body to make it lighter. On weekends, the dunes were teeming with home-built contraptions.

Ah-ha! As Webster recounts, Meyers was dissatisfied with the clunky styling and performance of a popular 1950s-era dune buggy conversion kit that simply bolted onto a Beetle floorpan, complete with the original powertrain and suspension. He literally built the Manx in his garage. So retro!

Does Volkswagen Dream Of A DIY EV?

Keep Mr. Meyers in mind while you take a look at Volkswagen’s pitch for the new dune buggy concept:

The concept of the fully electric buggy is based on the vehicles that were created in the 1960s in California. Back then, the Beetle chassis served as the basis for these buggies; now, the MEB [modular electric drive matrix] is proving to be just as flexible…

…The new MEB concept vehicle shows that this fully electric platform can be used for more than just large-scale series production models. Like the Beetle chassis of yesteryear, the MEB has the potential to facilitate the development of low-volume niche vehicles.

Where were we? Oh right, Volkswagen continues:

From the Beetle convertible and special bodies produced by companies such as Hebmüller and Rometsch to dune buggies like the Meyers Manx, the Beetle chassis allowed for creative custom solutions for decades. Globally, around 250,000 individual vehicles were built as one-offs or at low volumes through to the 1980s.

Say, What If Volkswagen Is Eyeballing 3-D Printed EVs?

Wait — really? Two hundred and fifty-thousand one-offs and low-volume production lines? And that was back in the olden days, when there were less people on the planet.

All this makes us think that Volkswagen is tapping out a message on the automotive astral plane, in hopes that Local Motors may respond.

For those of you unfamiliar with Local Motors, that’s a US startup that began life with a business model based on small, local factories that can turn out electric vehicles in small volumes. The company has enjoyed support from the US Department of Energy’s Oak Ridge National Laboratory in Tennessee.

The Local Motors business model is made possible by 3-D printing. That’s right, the whole car body is 3-D printed. Interestingly, the Local Motors EV printer is about the size of a large parking space. It could easily fit into a large garage. Just saying.

In any case, 3-D printing is where things get interesting.

Bruce Meyers made his Manx body out of fiberglass, a flexible, lightweight, and easily workable material worlds apart from the steel used in conventional auto manufacturing.

Substitute 3-D printing for fiberglass and Bob’s your uncle — almost.

As a “city car,” Twizy’s top speed was a less than stellar 50 miles per hour. Twizy was introduced to the EU market 2012 and enjoyed a few years of popularity before sliding into obscurity, though just recently it has found new life in Asia as an alternative to motorcycles.

You know where this is going, right? Take a Local Motors body and bolt it onto a more serious platform like the Volkswagen MEB and you could create a new golden age of DIY automotive customization.

Okay, so maybe you couldn’t fit a Local Motors 3-D printer in your own garage, but there could be a shop right around the corner where you could order up your own design and go get a new haircut while you’re waiting for printout and assembly. Kind of like getting a tattoo, only it’s a car.

Just dreaming! Or are we? If you have any ideas about where the Volkswagen EV dune buggy concept could go, drop us a note in the comment thread.

Meanwhile, we’re reaching out to Local Motors for their take on Volkswagen’s new EV concept. Lately they seem to have turned their attention to self-driving shuttle buses but you never know, the siren call of the US dune buggy could prove irresistible…

Don't want to miss a cleantech story? Sign up for daily news updates from CleanTechnica on email. Or follow us on Google News! Have a tip for CleanTechnica, want to advertise, or want to suggest a guest for our CleanTech Talk podcast? Contact us here.
In this article:Volkswagen (VW)