I received quite a few comments that running Tesla’s finances through a lemonade stand confused readers. I realized two things. People without a financial background loved it. People who fully read Tesla’s SEC filings for a mid-morning snack hated it, or at best tolerated it. 😉

To make some amends, I am publishing two spreadsheets used to make my predictions for Tesla’s Q4. The first is my original and the second is after adjusting for Tesla’s recent delivery estimates for Q4 (see here and here for some high-level detail on Q4 deliveries). Sorry, lemonade folks. I promise I’ll bring lemonade back when Q4 results are released.

Update: Tesla’s news on 1/18/2019 shocked me and forced an update to my original article. I was predicting a record-breaking quarter. That turned out to not to be the case and it would be wrong to go with what I first wrote. I have kept my original charts and most of the wording to show my thought process. I have included additional sections below to account for the news.

I wrote this on my Twitter feed: “Heart-wrenching news to those impacted @Tesla. ;( My prayers are with you and your family. You will get something soon. Thank you for your dedication and contributions to advancing sustainable energy for all of us. God speed.”

Tesla set records for production and deliveries in the 4th quarter. From Tesla’s delivery report:

After difficulties suffering through production hell earlier in the year, this is an extraordinary feat. That said, Wall Street analysts and I had even greater expectations. According to FactSet, delivery numbers were 2,000 less than expected. Without detailed access to the FactSet database, we don’t know how FactSet computed the numbers. I am reaching out to FactSet in the hopes of finding out more. A miss of 2,000 deliveries amounts to a miss by 2.1%. It’s not a lot. In combination with Tesla reducing prices, this is blamed for Tesla’s stock having a deep fall early in January. “The Grinch is in town and Santa has left the building,” was the general feeling among Tesla shareholders (of which I’m one).

I will have to eat humble pie based on how wrong my estimates were. I was overly optimistic that the combination of the expiring tax credit and buoyant production would allow Tesla to set even larger records. It looks like Tesla did not expand production aggressively and focused on preserving gross margin. However, that bodes well for the financial results in February.

Here are some highlights:

The end result of my estimates is still $500 million in net profit. Operating cash flow is strong at $1.3 billion. Cash balance increases robustly to $3.7 billion. This cash balance does not include the $230 million in debt Tesla repaid in November. Adjusted earnings are estimated at $3.99, still much higher than Wall Street estimates or Estimize’s crowdsourced estimates.

Here are some charts for those visually inclined. 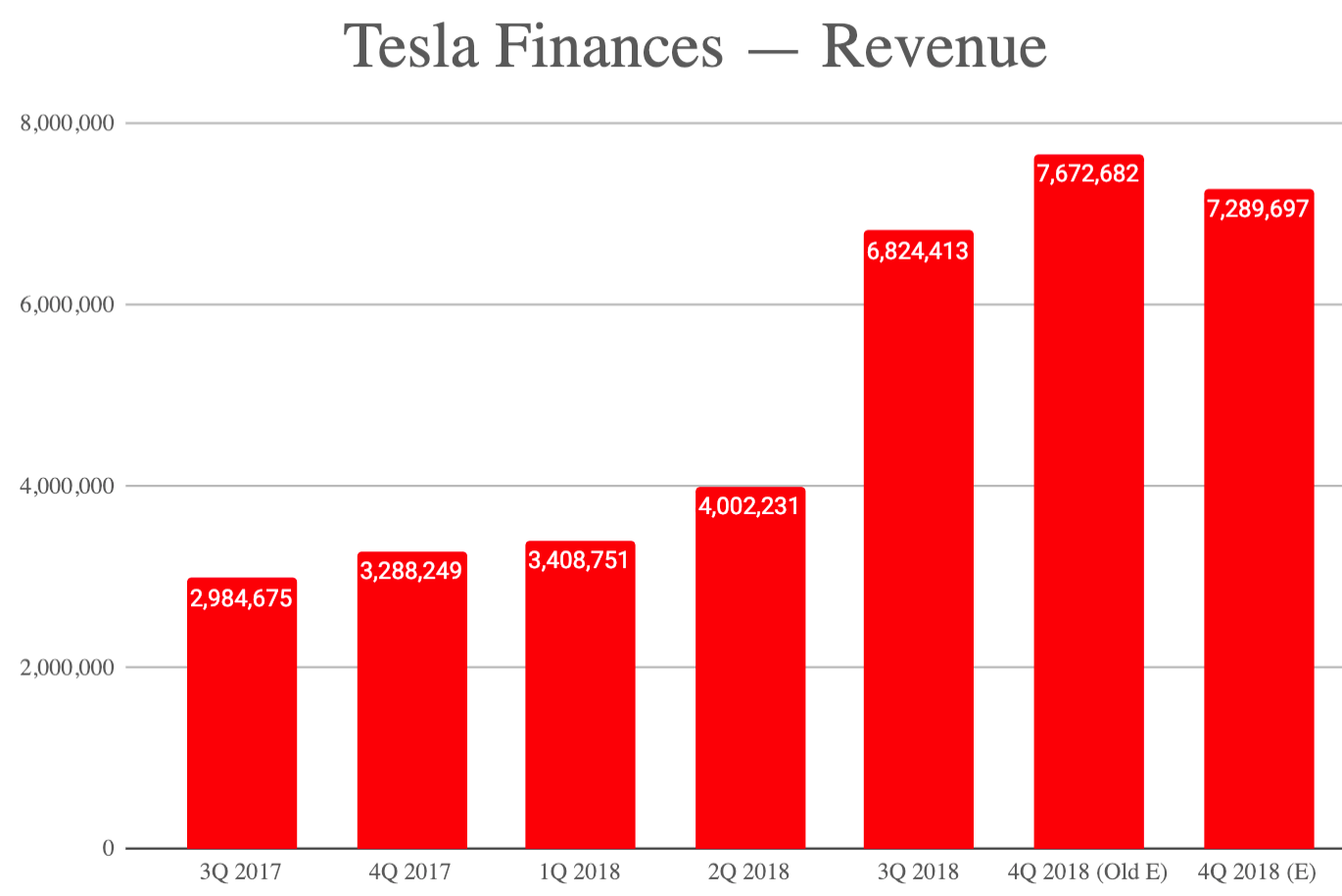 Elon’s email should be read in full by anyone interested in Tesla.

“In Q4, preliminary, unaudited results indicate that we again made a GAAP profit, but less than Q3. This quarter, as with Q3, shipment of higher priced Model 3 variants (this time to Europe and Asia) will hopefully allow us, with great difficulty, effort and some luck, to target a tiny profit.”

This news changes everything in the charts above. It also led to a -13.0% drop in the stock. How much “less” is less GAAP Profit? I decided to do a quick scenario analysis.

Q3’s Net Profit was $311,516. Cells in black underline are possible based on what Elon said. These numbers are based on $205 million in ZEV credits, which is probably overstated. The best case is Gross Margin stayed the same as last quarter and Model 3 ASP declined to 55,000. The worst case scenario is profit much less than Q3. Combined with an expected tiny profit in Q1, expectations were reset for many people. It could be profit is less due to the other areas outside of the Model 3 not performing well. I think it is more sales of the Mid-range Model 3 which helped lower ASP’s. Lower ZEV credits also would contribute to less profit. Most likely, it is a combination of items. We won’t know for a few weeks what caused the lower profit. It’s merely speculation at this point.

Tesla delivery and financial numbers are never complete without some Pravduh thrown in to get the naysayers energized.

The headline is accurate but misleading. How many people will put the proper emphasis on “as much” in the above headline? The 10% tumble is emphasized. That’s bad optics and a large round number. Actual closing results were -6.8%. This level of volatility is high but normal for Tesla over the last year. The headline makes it seem Tesla is cutting prices due to missing vehicle delivery estimates. That’s factually not true. From Tesla’s delivery estimate press release:

If we re-write the above, it looks like the following: Tesla shares drop -6.8% as the company just misses optimistic Wall Street vehicle delivery estimates, cuts prices to offset tax credit. If things were really bad, Tesla would have cut prices by $3,750 or more. The egregious part of this headline is that it was prominently featured on CNBC’s home page the whole day even as Tesla bounced higher from the lows of the day. It was subsequently moved from the home page after the markets closed. That’s real-time Pravduh for you. Sneaky, highly effective, and the evidence destroyed. And that’s just one headline. There were many others like that.

Although Tesla didn’t meet my overly optimistic estimates, they still had a profitable quarter. Even if gross margins are the same as last quarter, they will still earn a decent level of profit. Hats off to all the employees of Tesla for making it happen. Longer term, Tesla will continue to grow.

Cyclically, the US stock markets are in a weak time right now until March. Tesla will go along for the ride. Apple came out on Jan 2nd and said revenue for Q1 would be $5 billion to $8 billion less than what it thought two months ago! China is the culprit for not buying enough golden delicious Apple iPhones. For Apple’s honesty in reporting material news, the stock went down 7% after the market closed. Please keep in mind Tesla is reporting record deliveries and went down a similar amount. Investors are panicking after seeing the stock market closed lower at year-end for the first time in 9 years. All subpar news will be sold quickly and viciously as investors head to the warm caress of cold, hard cash and soft, 24 karat gold.

Note: I wrote the last paragraph before the news on Tesla came out. There is a rising risk of worldwide recession heading into January 2020, which I did not mention previously. 2019 is shaping up to be challenging on many fronts for Tesla. But there is room for optimism on Tesla’s product pipeline. Elon ended his email on a positive note.

“For those remaining, although there are many challenges ahead, I believe we have the most exciting product roadmap of any consumer product company in the world. Full self-driving, Model Y, Semi, Truck and Roadster on the vehicle side and Powerwall/pack and Solar Roof on the energy side are only the start.”

Regarding Q1 estimates, I have no comment. Q1 is seasonally weak for Tesla. Tesla will be facing market turbulence and a Chinese economy slowing down. This will occur even as Tesla starts Model 3 exports to China and Europe to fulfill their backlogs. It is very possible that Tesla has record Q1 production with severely delayed revenue. This can happen due to longer transit times to China and Europe. All of this makes an estimate useless at this time.

You can view the full initial estimates here or the updated spreadsheet with actual delivery results here.

I am currently long Tesla shares and short Tesla stock options as a short-term hedge. I do not plan to make any investment or divestment related to Tesla in the next 48 hours from the publish date of this article. I do use the proceeds from my hedge to buy more Tesla shares.