Something popped up recently in my news feed about Workhorse — the electric van and pickup truck manufacturer — arranging for $35 million in new financing. Not only does the new money pay off some existing indebtedness, it also puts money in the till to pay for the supplies and materials needed to ramp up production. That’s all very nice, but hardly the kind of news that would get most CleanTechica readers excited. It’s not up there with news about the Tesla Roadster being fitted with a SpaceX package that includes cold gas jets for vertical takeoffs and landings, in other words,.

So I reached out to Workhorse for more information and was rewarded with a telephone interview with CEO Steve Burns. He is a lot like Elon Musk — a creative force deeply committed to bringing innovative electric vehicles to market. The only difference is that Burns is affable and approachable in a way Elon seldom is. And he doesn’t use Twitter!

I first met Burns in person during a rain storm last summer when he and his team brought a W-15 electric pickup truck and a Surefly autonomous hybrid electric aircraft to the plaza in front of the iconic Flat Iron Building in midtown Manhattan. He instantly made me feel welcome and shared details about the company and its products. Delivery vans haven’t changed very much in the past 50 years. They are basically a boxcar on wheels. The only difference is that some are bigger than others. Burns says Workhorse is not interested in just making an electric version of the traditional delivery van, it wants to rethink everything about what a delivery van should be. That includes focusing on the work environment for the people who have to load them, drive them, and deliver the packages they carry.

The EGEN is more maneuverable and has a smaller turning radius than conventional vans, which makes it easier to drive in congested urban environments. It is also about a foot lower than traditional vans. Imagine you are a delivery driver. Every time you enter and exit your vehicle, you are carrying packages that weigh 70 pounds or more which puts lots of stress on knees and hips. A lower load bed means less strain on the body, which leads to fewer work place injuries, happier employees, and higher productivity.

Workhorse began life as a company that converted existing vehicles to electric or hybrid power. But Burns says that is not the ideal business proposition. So instead of buying a chassis and cargo box from an existing manufacturer, it makes its own, which gives it the flexibility to innovate and build a van the way it thinks it should be built, not the way someone else says it has to be done. Workhorse has provided both WB Mason and UPS with prototype plug-in hybrid delivery vans for evaluation. They use the same 2-cylinder range extender BMW uses in the REx version of its i3. When I tested the WB Mason van from Workhorse, which uses a conventional chassis from an outside manufacturer, I was astonished to find what a chore it was to drive. It’s long, tall, wide, and clumsy, but it can haul a huge number of packages, which really the raison d’être of any delivery van. The NGEN van is an all electric dual motor work van suitable for almost any task tradespeople might need, as well as “last mile” delivery services in congested areas.

The NGEN van is designed expressly to meet those needs. It is the first all wheel drive light to medium duty delivery van, electric or otherwise. Like the EGEN, it is more maneuverable with a tighter turning radius than the competition and it sits just 8″ above the pavement, which makes getting in and out faster and easier. Steve Burns says it is not intended to be the best electric trade and delivery van, it is intended to be the best trade and deliver vehicle period, bar none.

“For as long as I can remember, we’ve been discussing what the future of delivery looks like and what role electric vehicles will play in that,” says Stephen S. Burns, CEO of Workhorse. “We are proud to say the future is here. With an off-the-lot cost on par with traditional fuel delivery vehicles, and substantial savings from there, we believe the NGEN will forever change the business of delivery as we know it.”

The NGEN has a lot to like. It weighs as little as 4,000 lbs — half as much as a conventional van. That low weight is attributable to carbon fiber frame rails and composite body panels. The NGEN has a fuel economy rating of 50 MPGe — almost 5 times better than its gasoline or diesel powered competitors. GVWR is 10,000 lbs and its low chassis weight means it can haul up to 6,000 lbs of cargo. Range is 100 miles.

Production of the NGEN is now underway at the Workhorse factory in Indiana, which has an annual capacity of 60,000 vehicles. 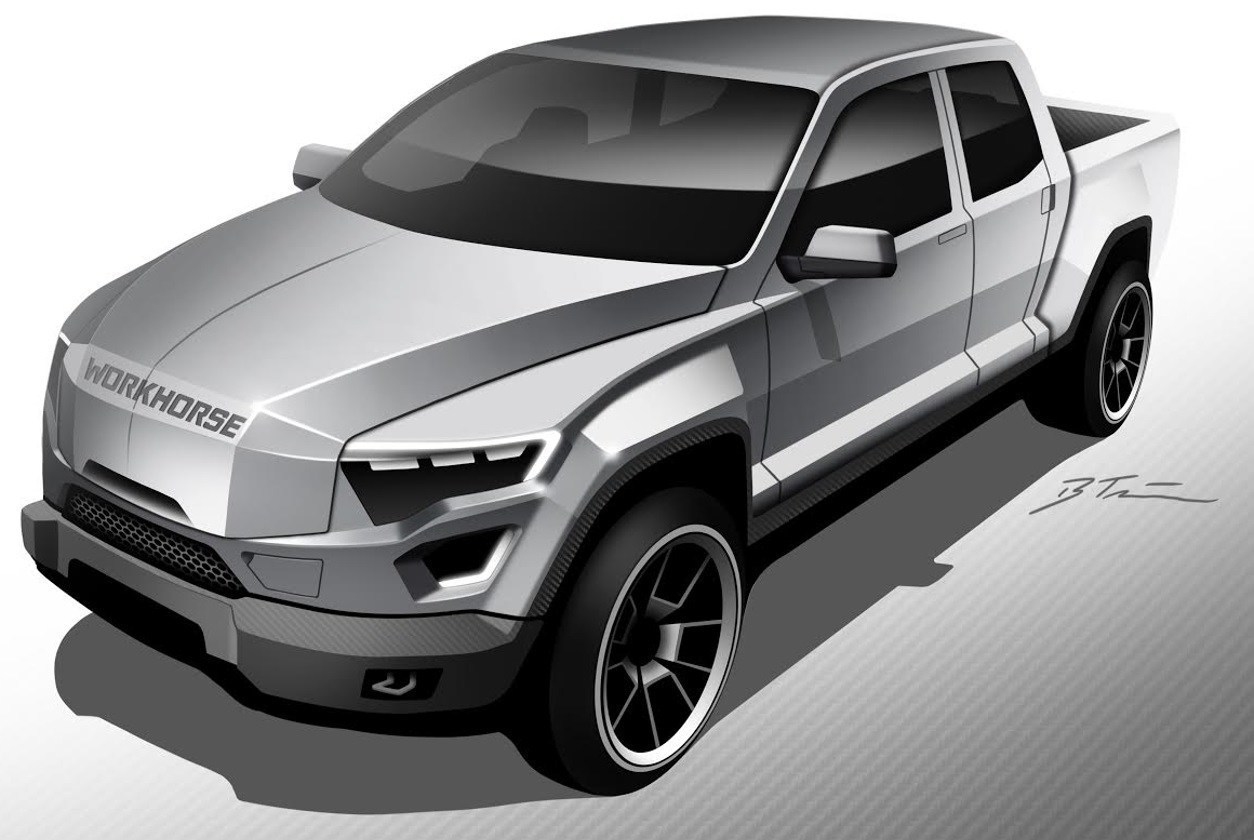 Steve Burns admits the company is running behind in its W-15 production goals, largely due to being constrained financially prior to the new line of credit coming into effect. But now, he says the supply chain is in place and the money is there to buy the components the company needs to get production going on the W-15 electric AWD pickup truck.

Burns says the company has orders for about 6,000 W-15s which will retail for $52,000 each. Do the math. That’s more than $300 million worth of orders waiting to be filled. The first examples will go to fleet customers starting this summer. The company hopes to begin production of trucks for non-commercial customers in late 2019 or early 2020 at a starting price of $52,000.

Initially designed to come with a range extender engine, Burns says the company has decided to focus on battery only vehicles first, principally for regulatory reasons. You may recall that the California Air Resources Board put the kibosh on the BMW i3 when it first came out by insisting the range extender not kick in until the battery was down to about 5% SOC. The result was i3s in America couldn’t keep up with traffic or climb hills with the battery charge so low.

The same problems apply to Workhorse and so the decision has been made to leave the REx versions aside for now and get the W15 into production sooner rather than later. The company is keenly aware that Rivian and Tesla are both planning to offer electric pickup trucks soon and it wants to capitalize on the advantage that being first to market confers.

The W-15 is quite a package. Even with a 100 kWh battery, it will weigh about the same as a Ford F-150 thanks to carbon fiber frame rails and composite body panels. Estimated range is 200 miles.  Carrying capacity is given as 2,250 lbs and the truck will be rated to tow up to 6,000 lbs. Charging time using a standard J1772 outlet is 10 hours. Using a DC fast charger can cut that to about one hour.

The United States Post Office will award a contract to replace virtually all of its local delivery vehicles sometime this year. Workhorse has proposed a version of its NGEN van. Of course, every vehicle manufacturer and many wannabe companies have tendered bids to the USPS. When it happens, Steve Burns says it will be the largest vehicle purchase in history and everyone will want a piece of the pie.

The rules of the bidding process forbid companies from discussing the bidding process publicly but it is obvious the NGEN should be a strong contender. Postal services around the world are choosing electric vehicles over gasoline or diesel powered trucks. Surely the USPS would like all electric vehicles that have significantly lower fuel and operating costs that conventional trucks, wouldn’t they?

If the contract decision favors Workhorse, the next question is where would the company build all those electric vehicles? I asked that question of Steve Burns, but he wisely said, “No comment.” The business community is well aware of what happened to Elon Musk when he make public statements that affected Tesla’s stock price last year. Burns doesn’t need that kind of trouble!

But it doesn’t take a lot of speculating to realize Workhorse is located in the Midwest, not far from the factories that General Motors has recently decided to shutter. Would Workhorse cast a covetous eye on one of them? “No comment,” the highly circumspect Burns replied again.

Workhorse Has All Its Ducks In a Row

Burns says Workhorse is ready for prime time. The engineering for the batteries, control systems, motors, and chassis components for the NGEN and W-15 are done. The supply chain is in place. There’s money in the bank to pay the bills, and Ryder Systems with more than 600 locations nationwide is on board to provide all the service and warranty needs of customers. Production is beginning, although the first examples will be prototypes supplied to trusted customers for evaluation and validation of production values.

The company stands on the cusp of great things but there’s “many a slip twixt the cup and the lip,” as my old Irish grandmother used to say. Burns is a visionary but he is also a pragmatist. The finish line is in sight but there’s a ways to go yet before the company becomes more than just another start up with big dreams but no substantial track record.

CleanTechnica readers know there is a huge pent up demand for electric pickup trucks. Bollinger already has product on the streets. Rivian says it will be ready with its $75,000+ electric pickup in 2020 or so. Certainly Tesla is going to offer an electric pickup in the near future. To paraphrase William Shakespeare, “Their comes a time in the tide of all electric truck manufacturers which, taken at the flood, leads on to victory.” From everything we know about Workhorse, the time of its flood tide is rapidly approaching.

My thanks to Steve Burns for making time to chat with me. He has started his own blog page on the company website where he comments on new developments at the company. Throughout our conversation, the sounds of electric vehicles being built on the factory floor could be heard clearly in the background. Burns is no ivory tower type. He is a realist who has been through the fires that are part and parcel of starting any new company several times before.

There is always the chance Workhorse could fail, but talking with Burns gave me the distinct impression the company is in good hands and will become a leader in electric trucks in the very near future. In fact, as a shareholder myself, I’m betting on it!