Chile is leading the charge towards sustainable transportation in South America, having taken delivery of what is now the largest pure electric bus fleet in South America. The delivery of the 100 fully electric BYD K9FE buses was marked by a ceremony in the capital city of Santiago, Chile, on December 13th that was attended by the President of Chile, Mr Sebastián Piñera, the Minister of Transportation in Chile, Gloria Hutt, and other key leaders from the country. The 100 new BYD K9FE buses for Chile lined up at the delivery ceremony. Image credit: BYD

The Chilean BYD team earned its first contract in Chile in May of 2017, for two fully electric buses that served as the trial installation for the company in Chile. During the trial, then–Chilean president Eduardo Frei Ruiz-Tagle visited BYD in Shenzhen as part of a delegation from Chile to see the first BYD K9FEs destined for Chile being unveiled. Since then, the two original BYD buses in Chile have driven over 100,000 kilometers while servicing local transit routes. 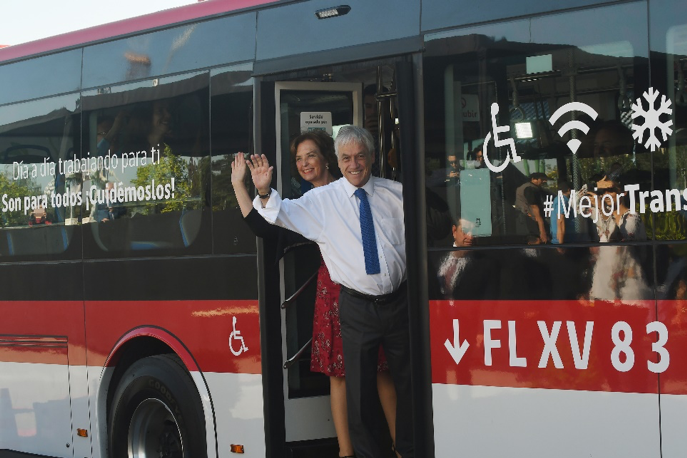 Chilean President Sebastián Piñera and the Minister of Transportation in Chile, Gloria Hutt on a BYD bus.

The early work clearly bore positive results as evidenced by the much larger scale 100 bus deployment in Santiago. The new BYD K9FE buses are capable of driving 250 kilometers per charge at which point they can be recharged during operator break times, stops along the route or overnight at the central bus depot.

Transit operator Metbus will operate the new fleet throughout the heart of the city of Santiago, which will serve as a beacon of the future of clean transportation to country leaders and tourists in the country’s largest city. BYD’s country manager in Chile, Tamara Berríos said, “BYD is proud of being part of this historical moment for Chile. This positions Santiago as a leader in sustainable cities in Latin America.”

The sale of 100 buses in a single order reflects an increasing awareness of the urgency of taking action against catastrophic climate change and the established performance of electric buses in transit applications.