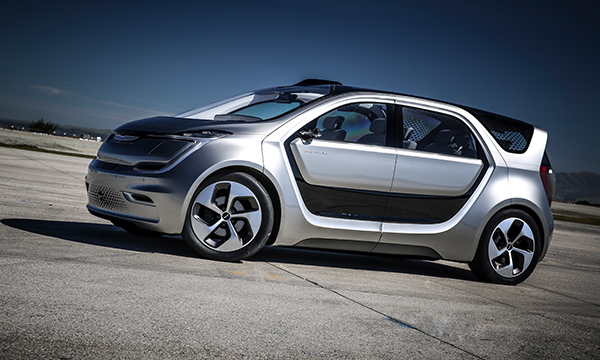 Chrysler took a fairly bold step into the future when it brought the Pacifica Hybrid minivan to market, the first plug-in minivan even though Chrysler just calls it a hybrid. At the time, no other manufacturer was willing to add a plug-in hybrid powertrain to a minivan offering. Toyota pooh-poohed the idea, saying no one wanted to buy a hybrid minivan. (Where have we heard words like that before?) Now, after much success with the Pacifica Hybrid, Chrysler says it has scheduled the Portal, an all new fully electric minivan, for production beginning in 2020, according to Automotive News.

On its website, Chrysler describes the Portal this way:

“To create the next generation family transportation, FCA sought the collaboration and fresh ideas of millennials working inside its design and engineering functions. Those ideas led to the Chrysler Portal concept — created by millennials for millennials.

“​​Millennials are a tech-savvy, environmentally-aware, cost-conscious generation. The Chrysler Portal concept is designed to respond to these needs and it explores the possibility of what a family transportation vehicle could look like for the millennial generation as their lifestyles evolve.​​​

“The flexibility, adaptability and technology features also make it ideal for business and commercial applications, such as ride hailing, car sharing and delivery services.”

Few specifics about the Portal are known, other than it will be a battery electric minivan. The concept displayed at the Detroit auto show (NAIAS) in early 2017 does suggest some innovative new thinking at Chrysler. For instance, the car will have a fold away steering wheel at some point in the future when true autonomous driving systems are available. And where would Chrysler get such autonomous technology from? Its link-up with Waymo may offer a clue. The Portal also features sliding front and rear doors — something no other manufacturer has toyed with. Unlike the highly complex falcon-wing doors on the Tesla Model X, sliders are low tech but effective. Chrysler pretty much invented the sliding van door back during the Carter administration and has built millions of them since. Will such doors make it into production? That is a definite “maybe” at this point. The Portal concept promises lots of connected car technology, including prominent exterior lighting designed to let other drivers and pedestrians know what it plans to do next when operating in autonomous mode. That may be a ways down the road yet, but the infinitely configurable interior represents clever thinking that is highly practical.

Where the Portal gets built is up in the air at the moment, largely because of the Trump administration’s insistence on turning America’s oldest and best friends into enemies. Few people realize how integrated the US and Canadian auto industries are. Most American car companies have significant manufacturing operations on both sides of the border, with vehicles and components passing back and forth between both countries on a regular basis.

At NAIAS this year, Sergio Marchionne, the late CEO of Fiat Chrysler, hinted to the press that a new product may be headed for production at the company’s Windsor, Ontario, assembly plant. “The replacement of the Caravan will be a Caravan-like vehicle,” he said at that time.

“I need another minivan. It’s going to be inline with the Pacifica architecture. The platform that was installed in Windsor to deal with the Pacifica is a world-class platform. I think it’s capable of utilization beyond its current use in the minivan. I think there are plans in place to try to take another product into it.” Trump and his henchmen could throw a monkey wrench into those plans if they decide to impose significant tariffs on Canadian-made vehicles.

The Portal concept is actually closer to a true sport utility vehicle than many of the soft-roaders currently masquerading as SUVs. Is that really what people want or do they just want cars that offer oodles of luxury touches and a higher seating arrangement? Honda and Toyota tried to tap into the go-anywhere, do-anything vibe a few years ago with the Element and Scion xB, both of which sold in far lower quantities than hoped for. While dining on shirred eggs and croissants in the swanky CleanTechnica dining room this morning, I mentioned to my colleagues that the Portal is one of the few new cars I have come across lately that actually floats my boat*. It’s clever, it’s innovative, and it’s definitely not your father’s Imperial. With decent range and an affordable price, it could find a home in my driveway some day.

Chrysler was the first US company to offer a plug-in hybrid minivan. Now it may be the first to bring a true electric minivan to market as well. Maybe there’s more to stodgy old Chrysler than we thought. Will the production version of the Portal be a compelling electric car? “We’ll see,” said the  Zen master.

For more about the Portal concept, check out the video from Chrysler below.

Related: “Family Life With A Chrysler Pacifica Hybrid, & A Little Bit Of Chevy Bolt Mixed In.”

*Technically, CleanTechnica doesn’t have a dining room, and even if we do, Steve certainly wasn’t in it this morning. However, he did write, “This vehicle actually tweaks my excitement needle a bit. Lots of innovative thinking for stodgy old Chrysler.” As you can see, he’s as fun behind the scenes as well as in front of the camera.