This quarter, the Tesla earnings call came on a day that I was already booked to basically spend all of my time slogging around Los Angeles, for CleanTechnica meetings with cleantech leaders as well as family engagements. That resulted in me listening in on the call from my Model 3 in some random neighborhood to the north of Los Angeles, which was surprisingly comfortable. I furiously took notes on the call while comparing them to the quarterly shareholder letter — while also chatting back and forth with our central team as we rallied around CleanTechnica Director & Chief Editor Zach Shahan in preparation for his line of questioning for Tesla CEO Elon Musk.

It was a whirlwind of a call and came on the heels of highly positive news about a strong month of Model 3 sales (including the car on the right), more stability in Tesla’s production and operations, healthy financials, healthy demand for Tesla’s solar energy and energy storage products, and the sentiment that when it really comes down to the wire, Tesla executes. After pages of notes and chat text, we hastily planned the editorial attack on the content, spreading like bees into a tornado to research and assemble our individual pieces to cover the numerous updates.

As the dust settled on our pieces and we had time to reflect on everything that was shared on the call, there was still so much more that Tesla had shared that we had not touched on, so we’re back. In this high-level summary piece, I’ll share the splinters of updates that may have slipped through the cracks, or are just so good that I felt they were worth reiterating.

Tesla has developed its own computer for Autopilot — from the ground up. Because the chips onboard were designed for this application, it’s far better than any other over-the-counter solution available. Tesla painted the picture of the floor at which it believes it can be profitable. This floor is comprised of “a total vehicle output of 7,000 vehicles per week, or 350,000 per year.” Such a level of production and sales “should enable Tesla to become sustainably profitable for the first time in our history — and we expect to grow our production rate further in Q3.”

That’s obviously why Tesla was pushing so hard to hit 5,000 Model 3s per week. With its weekly production up to the magic number, Tesla could start putting money into the bank instead of pulling money out of it. With holidays, maintenance, acts of God, and the like, Tesla will need to continuously outperform this baseline number to achieve profitability. From what was shared in the Q2 update, Tesla is well aware of that.

July is all about stabilizing and shoring up the production lines in preparation for kicking it all up another notch this month as Tesla pushes to reach and then stabilize Model 3 production at 6,000/week. The bump should mark the start of a continuous increase in production on the way to the magic 10,000/week number that Tesla has set as the maximum production target for Model 3s at Fremont. Or did it?

Elon Musk shared that, “the potential for our existing lines to produce more cars is much greater than expected.” It’s not clear if this speaks to what’s required to get to 10,000 or if something now makes even more production from Fremont possible, but either way, it will help Tesla’s CapEx forecast to squeeze more cars out of assets that have already been purchased.

Hitting 10,000 Model 3s per week with zero additional growth in Model S and X demand pins Fremont’s capacity ceiling at around 624,000 vehicles per year. Tesla does expect demand for Model S and X to grow in the second half of 2018, but Elon did not comment on how Tesla would achieve that or to what degree it expected demand to increase.

Tesla shared that the company is assessing market potential based on trade-ins received. This is an interesting spin on things that shows that Tesla continues to look beyond the box for new, innovative ways of understanding and responding to its customers.

The X factor in all of this is that many customers are stretching beyond their means or needs to get into a Tesla Model 3 sooner, which means buying into a higher build configuration than they would have otherwise. Forecasting demand and segmenting consumers is a sticky business, but Tesla has operated this same way for its entire existence, pulling in customers who never thought they would pay $XYZ dollars for a car and even getting them to put down deposits on the Model S/3/X.

On batteries as a competitive advantage …

Tesla reaffirmed that it is the world leader in automotive battery production, which may come as a surprise if you know that it wasn’t the leader in plug-in vehicle sales last year — that was BYD. In addition to some fully electric cars, BYD makes tons of its “dual-mode” vehicles, which we call plug-in hybrids. These vehicles are great and pack in a fairly small number of batteries to still achieve meaningful all-electric range. But that plug-in hybrid approach using smaller batteries means less battery production. The new BYD Tang DM, for instance, is a full-sized sedan that goes from 0–60 in just 4.3 seconds and can still go 62 miles on a single charge of its batteries.

Overall, the batteries required for 100,000 plug-in hybrids is far less than what is required to build 100,000 fully electric cars with 300 miles of range. #math #physics

Tesla shared that its Gigafactory 1 in Sparks, Nevada, has achieved an annual battery production rate of 20 GWh, making it the highest volume battery plant in the world by a significant margin. Looking around the globe, Tesla currently produces more batteries than all other carmakers combined. That’s not a fair statement, as most other carmakers outsource battery production, but it does speak to Tesla’s advantage in battery pricing — driven both by internal production methods and higher volumes than everyone else.

Gigafactory 1 battery production has reached an annualized run rate of ≈20 GWh – more kWh than all other carmakers combined pic.twitter.com/wFIB7E72rX

Tesla took in more than 60,000 requests for test drives of the Model 3 in July alone. This can largely be attributed to the latent desire for people to see and touch the car for the very first time. Included in that number are the hundreds of thousands of reservation holders who might never have seen the car in person, let alone driven it.

That desire was never something potential customers could fulfill because there simply weren’t any Model 3s — or Model 3 Performance builds — available to see. When the cars started showing up in stores, customers hit the web or walked into the stores and asked to see and drive them. Moving from Q2 to Q3, Tesla had queued up more than 10,000 vehicles that were in transit to customers on July 1. As such, Tesla provided guidance that deliveries would outpace production in Q3. This was done intentionally to stall the delivery of the 200,000th Tesla to a US customer since delivering that vehicle at the start of the new quarter meant more federal tax credit money for more customers.

Analysts may say that the Model 3 has the potential for 30% gross margins, but that doesn’t necessarily make it so in the real world. As with any new product launch, Tesla’s margins on its early production vehicles were heavily in the negative, but that has been improving over time as early interventions on production line issues have squeezed more car out of less money and sped up production.

Tesla shared that it is on that improvement ramp and hitting some important milestones. The company gave guidance for a 15% gross margin on Model 3 in Q3, with the expectation that it will improve to 20% in Q4.

Since the Model 3 launched, Tesla has been taking a beating when it comes to service. The forums are chock full of new-to-Tesla customers and longtime Tesla customers suffering through waits of many months for single parts.

These service and parts supply chain issues are to be expected, but they are not welcomed or excused by everyone — and not everyone appreciates the challenges as Tesla attempts to dig itself out of Model 3 production hell. As Elon shared, ramping from 1,000 deliveries per week to 6,000 per week was like “hitting a square wave.” That’s electrical engineering nerd speak for running into a brick wall. 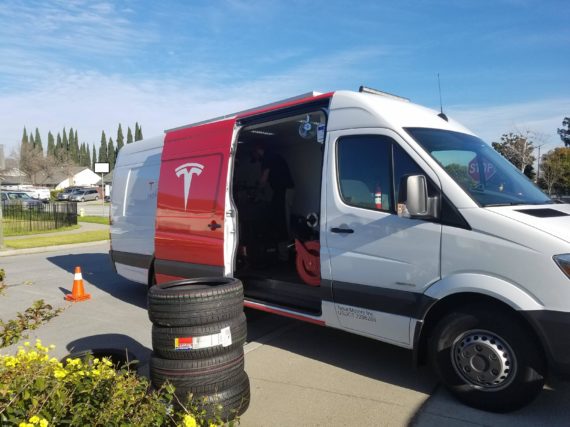 To combat these issues, Tesla continues to pour itself into service, opening 8 new stores even as it laid off 9% of its staff just a few months back. Curiously, new job postings are up from just over 1,500 active new job postings to just over 2,000 postings as Tesla seeks to build the organization it always wanted to be. Tesla closed Q2 with 347 locations worldwide. Now at 40,000 strong, Tesla is feeling the pain of being a global company that’s still trying to act like a startup all these years later. And, as Elon shared in a recent Bloomberg interview, when you have 40,000 employees, you’re bound to have a large variety of disgruntled employees and employee problems as well.

In parallel, Tesla is ramping up its mobile service fleet “mostly in the US” and it expects to be gradually rolling this out around the world as it customizes service for each new geography. Without a doubt, they intend to be operating as smoothly as possible when they roll up to the first customers in fresh regions.

Customers have shown a clear preference for having their vehicles serviced at home and I can attest to just how much easier it was to have a mobile service tech pull up out front and replace the first-generation door handles on our Model S in our garage. That was much easier than it would have been to get the car upgraded at a service center.

All told, there are currently 10,800 Supercharging stalls around the world and 19,200 destination chargers in Tesla’s world. That’s an impressive array of DC fast charging stations and a powerful supportive army of “regular” level 2 chargers for customers to tap into when they are out in the world. Moving forward, Tesla is working with large employers to get to work installing chargers for their employees.

This network expansion comes as Tesla announces the end of free lifetime Supercharging for even referred buyers of the Model S, X, and Model 3 Performance. It would be fascinating to see data on which Tesla models make use of the stations the most (and separated by model year), but alas, I have not been granted the keys to the Tesla kingdom … yet.