The conventional wisdom in electricity generation is that scale matters. But this outdated notion rests on the assumption that electricity generators compete only in the wholesale market. California’s nearly 1 million solar roofs already producing power provide the factual counterpunch to this myth, but so does ample research on the economies of scale and the price of competition in the wind and solar markets.

“I, along with the vast majority of energy economists, believe that residential rooftop solar is a much more expensive way to move towards renewable energy than larger solar and wind installations.” – Severin Borenstein, economist at University of California Berkeley

The conventional wisdom in electricity generation is that scale matters. But this outdated notion rests on the assumption that electricity generators compete only in the wholesale market. California’s nearly 1 million solar roofs already producing power provide the factual counterpunch to this myth, but so does ample research on the economies of scale and the price of competition in the wind and solar markets.

The 2-page summary of Is Bigger Best? (preview below), a report by the Institute for Local Self-Reliance, illustrates the misconceptions inherent in comparing utility-scale to community-scale or on-site renewable energy generation. In short, price comparisons between utility-scale and rooftop solar ignore that the two do not compete. Amazon Prime’s free shipping wouldn’t pretend to compete with the USPS if it didn’t deliver to the door, and neither should utility-scale solar pretend to compete with rooftop systems. 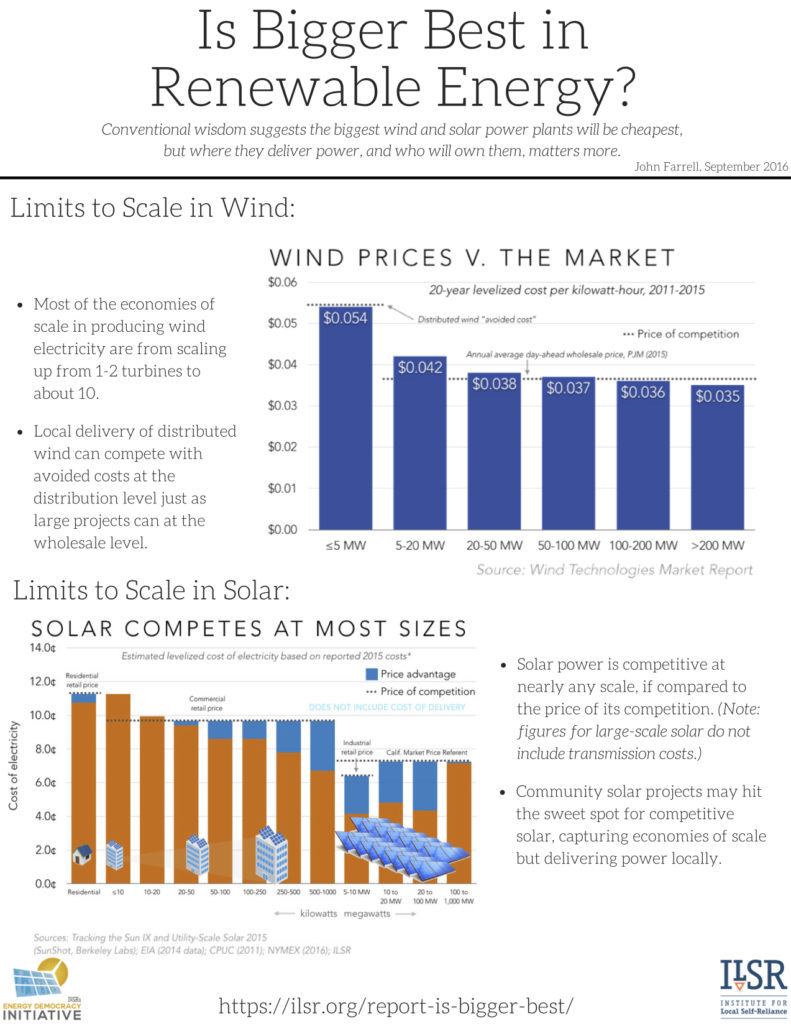 Furthermore, rooftop solar democratizes the economic returns of a clean energy system, allowing many residents and businesses to own a slice of the energy economy formerly reserved for utility shareholders, and supporting local businesses that provide everything from accounting to tax preparation to advertising for the local solar industry.

To hear more on how smaller solar installers offer better prices, listen to our podcast with EnergySage CEO Vikram Aggarwal.

Don't want to miss a cleantech story? Sign up for daily news updates from CleanTechnica on email. Or follow us on Google News! Have a tip for CleanTechnica, want to advertise, or want to suggest a guest for our CleanTech Talk podcast? Contact us here.
In this article:California, distributed generation, economies of scale, Institute for Local Self Reliance, rooftop solar, solar energy