Germany struggles to get its highly anticipated coal exit task force on track. The government on Wednesday postponed at the last minute the official launch of the phase-out commission for the third time. The quarrels over the commission’s leadership and remit bear witness to the enormous task ahead, and also foreshadow difficult negotiations. However, the government insists that its schedule to name an end date for coal by the end of the year will be kept.

Germany struggles to get its highly anticipated coal exit task force on track. The government on Wednesday postponed at the last minute the official launch of the phase-out commission for the third time. The quarrels over the commission’s leadership and remit bear witness to the enormous task ahead, and also foreshadow difficult negotiations. However, the government insists that its schedule to name an end date for coal by the end of the year will be kept.

The German government removed the official launch of Germany’s coal exit commission from the cabinet agenda only hours before the meeting was due to start. The third deferral of the body tasked with planning the phase-out of Germany’s most important fossil power source hints at the enormous challenges that lie ahead.

A government spokesperson said some “questions regarding personnel” still needed to be resolved but said the commission’s objectives had been agreed on. The fresh delay of the comission’s launch did not affect the commission’s schedule, the spokesperson added. The commission’s timetable stipulates a first report to the government by October, proposals for closing Germany’s climate gap for 2020 before the COP24 in Poland, and the final report by year-end, a government document seen by the Clean Energy Wire said.

The coal commission – officially called “Special Commission on Growth, Structural Economic Change and Employment” – is supposed to bring policymakers, industry representatives, labour unions and reportedly alsoenvironmental NGOs to the table to decide on a roadmap and a clear end date for coal-fired power production. Germany must exit coal-fired power generation to reach its goal of becoming largely greenhouse gas-neutral by mid-century, as the technology is the country’s single-largest source of carbon emissions.

In the past months, there was intense squabbling about every aspect of the task force, regarding questions such as: What should be the commission’s title? Which ministries should be in charge? Who else should be a member in the commission? What should be its priorities? [Find more details in the article Germany gears up for official talks on coal phase-out]

A “monstrous commission” for a gigantic task

Earlier negotiations about the future of coal in Germany had already revealed that the subject is extremely sensitive. Disagreements over coal were one of the reasons for the collapse of the “Jamaica” coalition talks between CDU, the Greens and pro-business FDP at the end of last year, where the Conservatives agreed with the Greens to retire 7 gigawatt (GW) of coal capacity by 2020.

Media commentators said the protracted wrangling revealed that the coal exitwill have a deep impact on Germany.

“The squabbling before the launch is indicative of the task force’s importance,” wrote Angela Ulrich for public broadcaster ARD. Stefan Schultz and Gerald Traufetter wrote on Spiegel Online that the coal exit is likely to be “one of the defining projects of the coming decades”. It was therefore  understandable that so many lobby groups wanted to have a say, resulting in a commission with “monstrous dimensions”.

According to the latest plans, eight ministries will be involved in the task force, which will be headed by four people. Representatives of six German states will also participate. Numerous associations – representing utilities, industry, renewables, employers, and environmentalists – also vie for a say. Some media published a provisional list of task force members, including Michael Vassiliadis, head of the mining union IG BCE, and Hans Joachim Schellnhuber, director of the Potsdam Institute for Climate Impact Research (PIK).

Environmental NGO WWF said the complicated makeup “will make it very difficult for the commission to arrive at a result”.

“Time is running out to present first results by autumn” as planned, tweeted Greenpeace Energy. “At least, a last chance to improve on the task force’s mandate and personnel.” 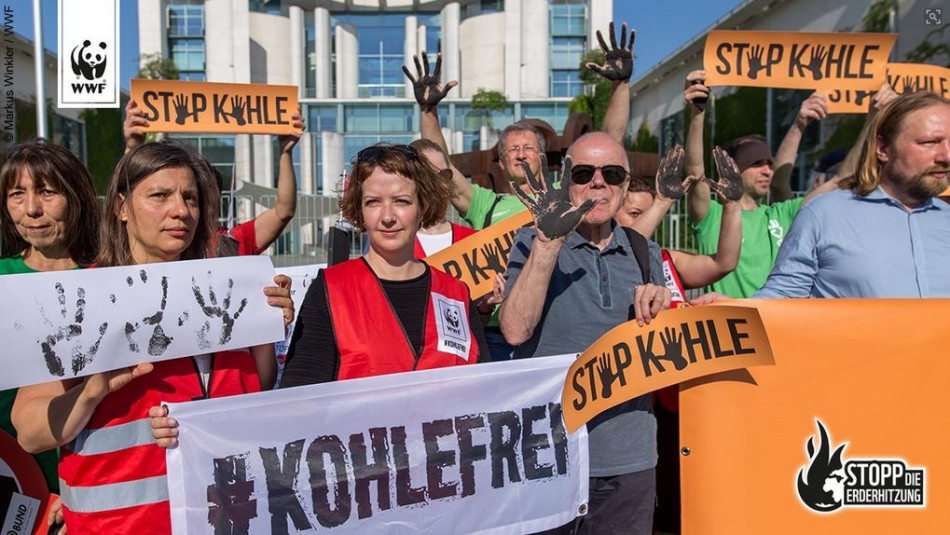 Anti-Coal demonstration in front of the Chancellery.

The chemical industry warned this week that power prices would rise and supply security could be endangered if the exit was too fast.

The head of the Green’s parliamentary group, Anton Hofreiter, called the new postponement a “tragedy” He added: “This does not bode well. Neither climate protection nor urgent answers for thousands of coal employees must be postponed in this delay commission.”

All text created by the Clean Energy Wire are available under a “Creative Commons Attribution 4.0 International Licence (CC BY 4.0)”. They can be copied, shared and made publicly accessible by users so long as they give appropriate credit, provide a link to the license, and indicate if changes were made.