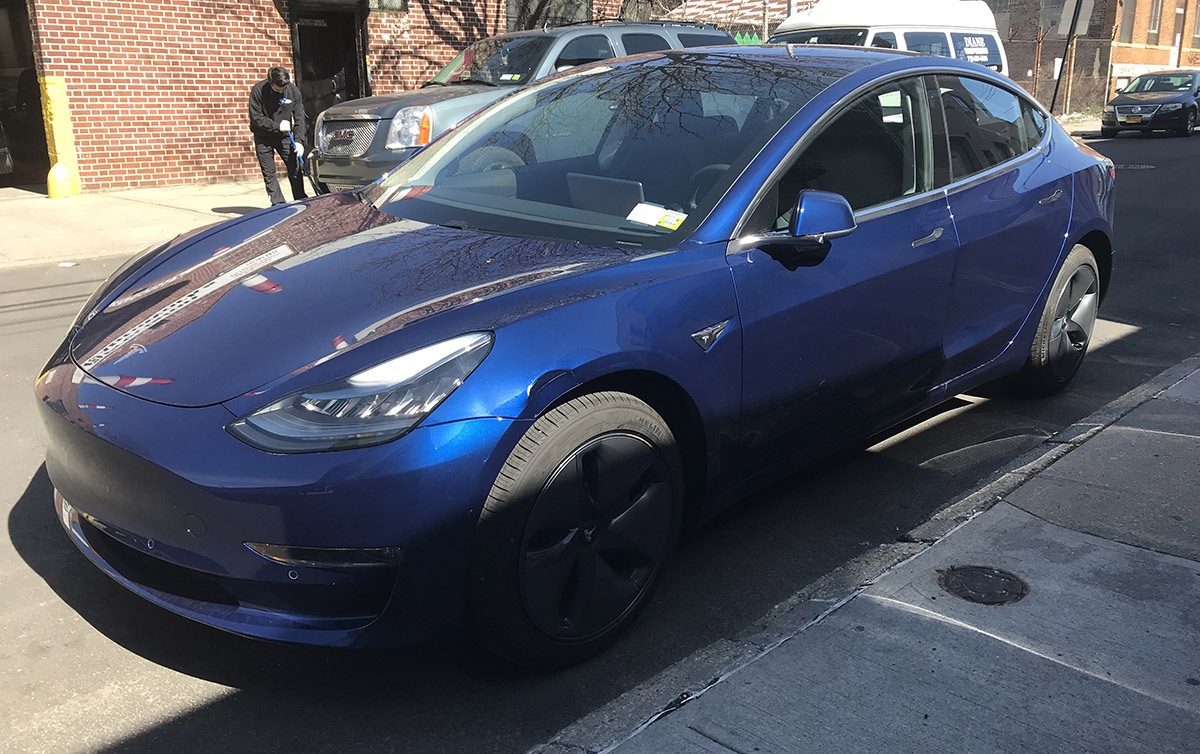 So, in March, I got “the call” from Tesla: My Model 3 was coming to New York and they were ready to schedule delivery. And this was only 6 days after I was invited to configure the car and lock in my order. Needless to say, I was excited. I’d been waiting to own a Tesla since my first test drive of a Model S in 2013, and had stood in line on Model 3 launch day to get a chance to get one as quickly as I could. The delivery was delayed a week when detailers at the Tesla store in Brooklyn noticed a paint chip: “Elon says they have to be perfect,” said my delivery specialist. And so I waited a few more days.

The delivery experience was great. Kamau explained the operation of the touchscreen, showed us the little trick for opening those flush-mount door handles, and revealed a few fun easter eggs. The drive home with my daughter in the passenger seat was super fun: smooth and silent; super quick acceleration; seamless voice-controlled navigation; and a tight responsive ride. I asked the car to play OMD’s “Tesla Girls” and it did so, creating an ’80s techno station for me on Slacker.

There were a couple of minor quirks. The voice command option was occasionally unresponsive when I was seeking additional songs and music options. Also, the car seemed to think there was someone in the passenger seat even when there wasn’t. So the seat belt warning light and tone were coming on even though the seat was empty. A friend suggested that, maybe, “God is my co-pilot.” Well, if he is, he should put on his damn seat belt!

But then on my second outing with the car, I accidentally clipped a parking sign while backing out of a parking space. It was a bonehead move, but the fact that the car’s arsenal of cameras and sensors didn’t notice it either was mildly annoying. But I shrugged it off and thought, “no big deal.” It was, after all, just a 4-inch dent on the front left fender. How much could it cost to repair? The answer would be shocking (to me, at least — you already know from the title of the article).

A nice young lady named Chef from Precision Autoworks took a look at the car, took some pictures and started plugging the data into the company’s appraisal system. It turned out that Precision — one of only a few Tesla-authorized repair shops in New York City — was the same shop that Tesla had used to repair the aforementioned paint chip. So I knew my baby would be in good hands. And then Chef dropped the first bomb: “So, I’m up over $2,000 and I’m not done yet.” Say what? I had thought it would be a few hundred dollars, a couple of days in the shop, and I’d be on my way. But with a Tesla, apparently there’s more to the story. 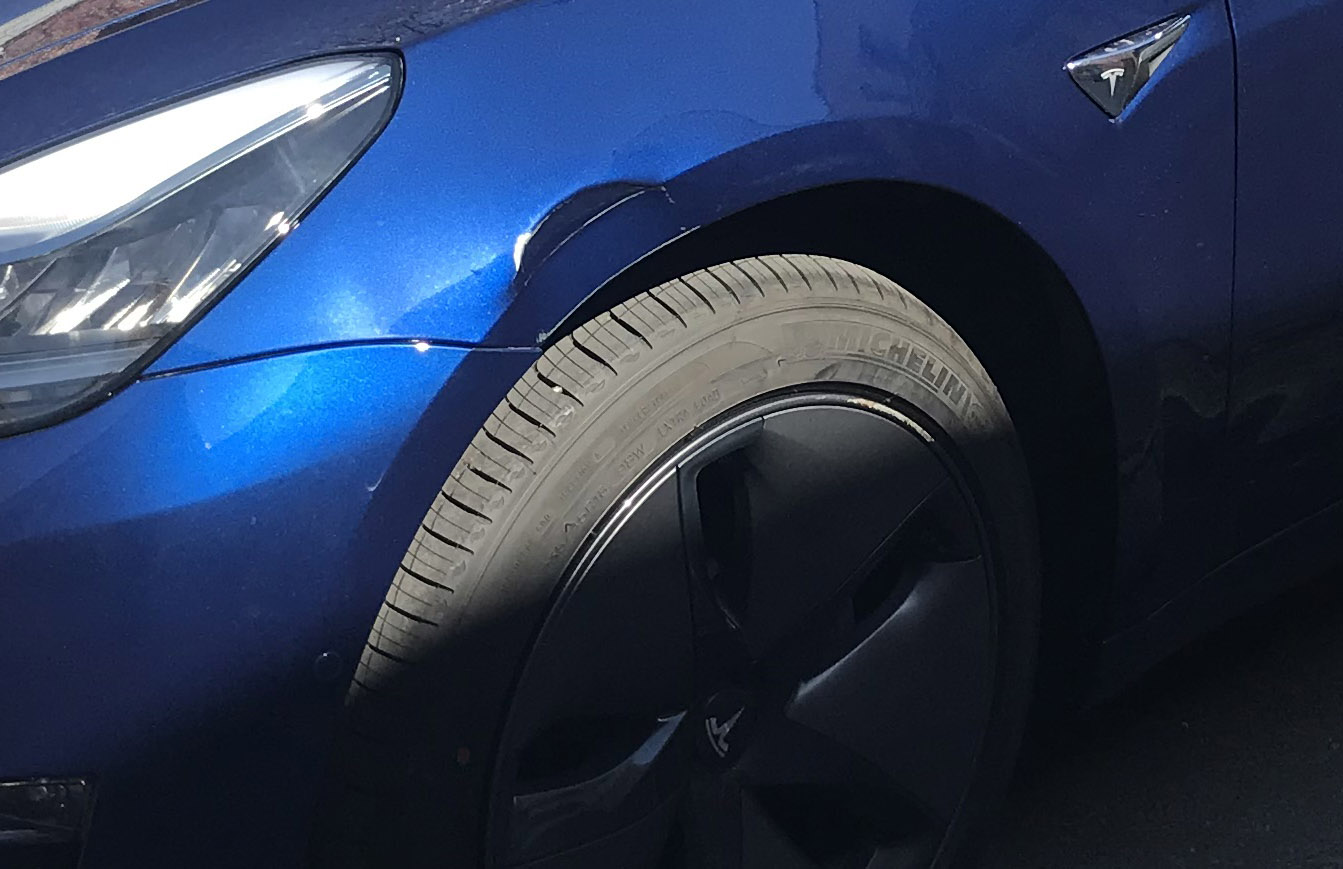 A closeup of the fender damage to this Tesla Model 3.

I decided to file a claim and asked the body shop folks to coordinate the repair with my insurance company. After a few days without any meaningful updates, I asked my insurance company (Liberty Mutual) what was the hold-up. The claims specialist told me, “Well the shop’s estimate was a bit higher than we expected.” How much higher? “Nearly $7,000, of which $5,000 was labor.” I had heard that the Model S was expensive to fix, mostly due to its all aluminum construction. But the Model 3’s “simple design” and the planned use of steel over aluminum where possible was supposed to make things like this less complicated (and less costly). It turns out that there is still quite a bit of aluminum in the Model 3, as you can read about in articles like this one. 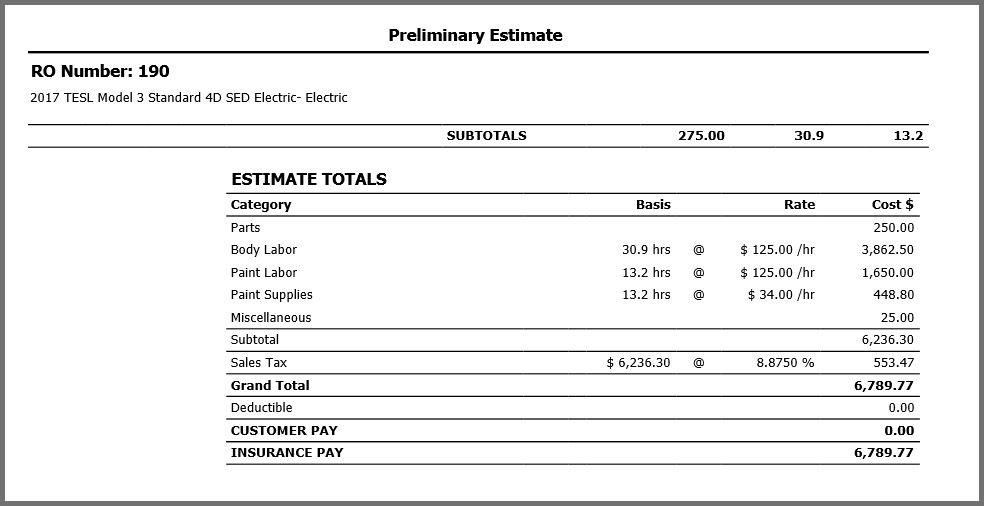 The body shop folks explain, “With the type of damage your car sustained and the materials involved, we could not repair the fender but had to order a replacement. Also, the specific color of your car we call Electric Blue and it uses a special process that requires 3 layers of paint and primer. And to match it precisely with the surrounding body means that we have to blend the paint on these surrounding panels. And all of this takes time and paint.”

I will say that the repair they did of the paint chip before I took delivery of the car was impeccable: I couldn’t spot any area of the door that looked different from the rest of the car. Also, Tesla’s premium paint jobs are not unique here. Any of the high-end paint options from luxury carmakers require more time, materials, and effort (read: $$$) to repair.

But more complicated and labor-intensive than the painting is the “R&I” — short for “Removal and Installation.” To repair this fender apparently requires removal and reassembly of much of the left side of the car, including all of the trim pieces, moldings, and the driver’s mirror, as well as the front bumper. And when you reinstall the front bumper, you also have to “aim” (re-calibrate) the front distance sensor. The repair also required disassembly of the rear seats in order to access (and disconnect) the high-voltage battery connectors. Apparently, they do this so as not to electrocute the folks working on the car (always nice to not kill anyone).

The insurance company balked at the estimate and sent their own adjuster. So a few days later, I got the news: the second adjuster’s estimate was not far off from the shop’s own appraisal. It was around $6,250 — about $500 lower than the original appraisal. So the insurance company approved the repair, and I had to wait a few more days for the shop to finish the work.

Liberty Mutual’s own independent appraisal of the repair came in pretty close to the shop’s original estimate, even with a much lower labor rate.

Another factor that should be considered here is that everything in New York City is expensive. The shop’s labor rate is $125/hour, which is a bit on the high side for body work, but in New York City, it’s difficult to find a body shop charging less than $75/hour. Liberty Mutual only allots $49/hour for labor, which is lower than I’ve ever seen in the city. As for Precision’s rates, a wall full of awards and a bay full of luxury cars (many of which were Teslas) in various states of repair suggest that they are earning them. They certainly had no shortage of business. And the results speak for themselves. 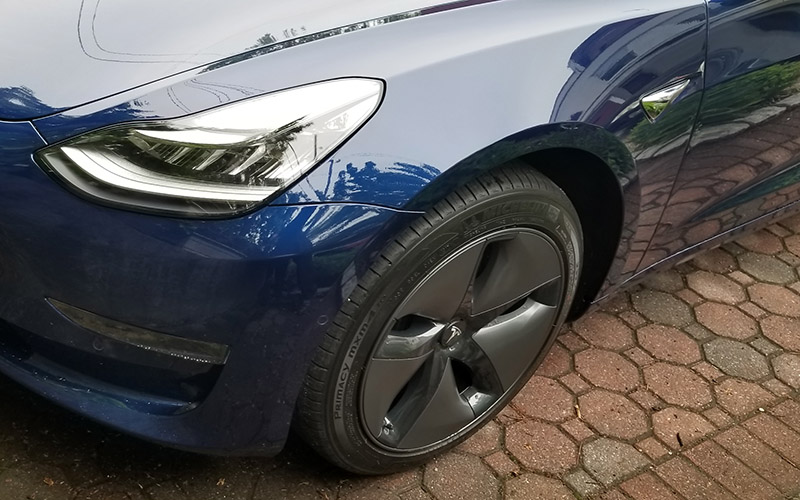 After repair, the Model 3 looked literally as good as new.

In the end, the repair work was top notch. The car looks brand new again. And the seatbelt sensor problem even seems to have fixed itself (or God has abandoned me, which is also possible). But there are a few things to consider when buying a Tesla:

¤ Teslas — Even the “Affordable” Model 3 — Are Still Expensive to Repair. There may be a lot less long-term maintenance required on the car due to its electric drivetrain and regenerative braking, but if you need body work, be ready to shell out for it.

¤ Choose Your Color Wisely. If you’re deciding whether to spring for the paint upgrade options (Midnight Silver Metallic, Deep Blue Metallic, Pearl White, etc.), then be aware that repairing the car with this type of paint job will be more expensive. If you’re concerned about lowest cost of ownership, go with basic black. Less money up front and less money down the road.

¤ Don’t Drive Like a Bonehead. Even with cameras and sensors, autopilot and autopark, you the driver need to pay attention to where you are and what you’re doing. Sensors can’t see everything, and cars can’t drive themselves (at least not yet).

Over time, as Tesla’s network of approved body shops grows, and competition rises, we expect that the Tesla repair prices will come down to closer to that of traditional ICE cars. But for now, a little extra caution will go a long way.

Use my Tesla Referral link to get free unlimited Supercharging on a Model S or Model X purchase. Follow me on Twitter at @MrBoylan.