My wife and I began investing in Tesla back in 2011, not long after the IPO here in the USA. The stock remains safe and sound in our retirement funds waiting for whenever.

That said, you can imagine the amount of reading and studying and further research I have done on first the vehicles and then SolarCity, which morphed into Tesla Energy. Our SolarCity stock only added to our Tesla holdings when the companies were combined.

Living in northern New England in the state of Vermont, we knew we wouldn’t be able to be early adopters of the SolarCity/Tesla Energy solar installation packages. However, good things come to those who wait.

I didn’t realize until late last year, October to be exact, that our local utility (spelled monopoly), Green Mountain Power (GMP), had to “open up” the area of our state for Tesla Energy to be even able to offer us a solar generation package. However, we timed our latest inquiry to Tesla Energy just right. I contacted Stephen Hamilton, an Energy Advisor for the South Burlington VT office of Tesla Energy, who is covering the southern region of the state of Vermont. Stephen came to the house within a few days of being contacted. He’s very knowledgeable about not only the Tesla Energy products available, but also the current and ever changing rules and regulations of the Vermont Public Utilities Commission and the many available rate structures (10 to date!) of GMP. At that point, we were in possession of our second-hand 2016 Model S 75D for two months. We were utilizing the free Tesla Supercharger network for most of our charging needs, having one charging station within 20 miles of our home and another conveniently located on the route of my daily 180 mile round trip commute.

We explained to Stephen that the location of our home is in a rural area on a privately maintained road that has just 14 homes on it, the majority of which are vacation homes, with the potential but rare reality of extended utility power interruptions. We wanted a solar energy generation package that would include a Powerwall 2. We wanted sufficient output to not only offset our utility-provided electric energy usage but also as much as possible to charge our Model S at home. This additional energy would allow me to make the daily work commute without having to stop at the Supercharger at least once per day, as well as take as much advantage as possible of “free” energy and therefore commuting fuel costs. A preliminary survey that Stephen was able to conduct utilizing Google Maps and our original home plans yielded a potential installation of solar panels rated in total at 11.5 kW.

The first formal step beyond that was to have a Tesla Energy tech come to the house to perform a full home survey. This included an internal inspection of my roof structure as well as the power service condition and location and current loads. Finally, they went on the roof to 1) inspect its condition up close and 2) take a panoramic solar survey to see what potential output could be expected. Our home, although 25 years old, passed all tests with flying colors. We built the home with a 200 amp panel and our current largest load is the oven portion of our stove, with a 30 amp breaker feeding it. The roof is a 40 year rated architectural shingle, and the main part of the house roof which would have the panels installed faces due south. More ideal conditions could not be expected.

However, we did find out in short order that a stress skin panel roof structure cannot be used for conventional solar panel installs. A stress skin panel is effectively solid core foam insulation sandwiched between two panels of wood. Confirmation of panel-to-roof integrity cannot be made with a stress skin. Therefore, we were limited to installing panels only on the main roof of the house and then further limited by local fire code setbacks from the edge of the roof. This allowed us to install an 8.125 kW system at this time. When the solar shingles become available in our region of the country, we will add approximately 4 kW output to the system.

With the contract signed and financing approved, we expected installation prior to the end of 2017, before the dead of winter took hold of our New England environs. However, Hurricane Maria took its toll on Puerto Rico in late September and Elon Musk made the conscious decision to redirect Powerwall 2 units to the island in conjunction with solar system installations in order to restore electric generation as best possible. Since we were into the least favorable season for solar energy generation and in full support of Elon’s efforts, we weren’t too terribly disappointed that we would have to wait a bit longer. Our system was installed in full over a two-day period in late March 2018. We had to wait an additional week before being able to fully commission the system for our utility to install the net meter. Once installed, a call to Tesla customer service had us up and generating electricity within about 10 minutes. Our first full week of operation — which began on Monday, April 9 — yielded the equivalent of 162.5 kWh of solar energy. This is an extraordinary amount in my mind since the only full sun day was Monday the 9th. The rest of the week was mostly cloudy and/or overcast. Based on our average monthly usage of around 550 kWh, we expect to meet or exceed that figure every month going forward. That would give us a net zero bill with the utility as well as allow us to provide a portion of the electricity needed to power our Model S. These estimates are right in line with our initial projections when we first decided to take this step towards electrical energy generation independence.

Finally, there is the Powerwall. I am currently holding the reserve capacity of the wall at 65% since we are still experiencing winter weather here, having picked up 4 inches of wet, heavy snow over the past weekend and the forecast for the upcoming week not looking great. It is a great comfort indeed to know that in the unlikely event of a utility outage we will be able to have the lights on and the home comfortably heated. This, in my opinion, is worth the full price of admission! 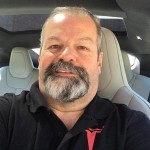