Coal Won’t Bring Appalachia Back To Life, But Tech & Government Jobs Could

Rather than dangle an unlikely return to former glories in front of the residents of these mountains, let’s be realistic and do everything we can to start a new chapter.

It was supposed to be all about jobs. When the president announced his intent to abandon the Clean Power Plan this spring and then withdraw from the Paris Agreement this summer, one of the biggest reasons cited was to protect the coal jobs sustaining communities in places like Appalachia.

There’s just one problem. Whatever the White House says, coal jobs are in a terminal decline and whatever cynics claim, it’s not some cabal of heartless environmentalists to blame. It’s the power industry itself, driven by advances in technology and simple market forces.

But the who or what’s responsible matter less than the who’s left behind as coal communities in Appalachia try to figure out another way forward as jobs disappear. Especially as politicians seem more than happy to invoke them in grandstanding statements without actually doing much for them on the ground.

So as the administration this week announced a new plan that seems designed to prop up failing coal CEOs and companies rather than actually care for the communities they claim to fight for, we ask a simple question the government really should be asking: Can Appalachia thrive without coal?

One of the most important factors in the decline of US coal isn’t regulation, but market forces. As renewable energy technologies like solar and wind have become cost competitive with fossil fuels, demand for coal has waned in the power sector. In 2006, coal provided 49 percent of US electricity; just 10 years later, that number had fallen to 30 percent. Beyond collapsing demand, across the last several decades, automated technologies like rock crushers and shovel swings have replaced miners, leading to steady employment declines dating back to the early 1980s. In 1979, there were 250,000 coal miners in the US. In 2016, only 53,000 workers held the same position.

“There’s almost zero reason to be completely optimistic,” Ted Boettner, executive director of the West Virginia Center on Budget & Policy, told Timeearlier this year. “It’s a disservice to coal-mining communities to tell them they will have a mighty comeback.”

WHERE ARE WE TALKING ABOUT?

These issues coupled with an absence of good-paying jobs has led to an exodus of high-performing students and skilled tradesmen from the region. Those who can leave often do, and they don’t come back – a phenomenon often referred to as “brain drain.”

So, how do we combat these troubling trends? The answer cannot be found in the region’s past and the dirty, dangerous coal that propelled its initial growth. Instead, reinvigorating one of America’s most beautiful and misunderstood regions has everything to do with the future, specifically computers and public service.

In some circles, the conversation on how to reinvigorate Appalachia has largely centered on bringing technological innovation to the region.

Excellent coverage on The Daily Show (below) and HBO’s Vice News has centered on programs dedicated to retraining former coal miners to code. It’s a natural fit: As with coding, mining requires strong problem-solving and decision-making skills, and comfort with technology (albeit a very different kind of technology). Plus, most coding jobs can be performed from almost anywhere, and Appalachia is already home to an enormous pool of talent – as Pikeville, Kentucky-based software development startup Bit Source discovered when it received nearly 1,000 applications for just 10 available positions.

Each year, 600,000 well-paying jobs in the US technology sector go unfilled, and many are eventually sent overseas. But these jobs could be on-shored – if more Americans had the right skills.

In this area, funding for programs that provide training in just those skills has largely come through the Appalachian Regional Commission (ARC), “a federal-state partnership that works with the people of Appalachia to create opportunities for self-sustaining economic development and improved quality of life.” ARC was founded in 1965 by President Lyndon Johnson as part of his “war on poverty.”

Last year, in the Obama Administration’s final budget, Congress approved a budget of $146 million for the agency – “its highest budget in decades, in order for it to focus on coal-impacted communities.” ARC’s POWER initiative specifically targets Appalachian communities affected by job losses in coal mining. In addition to supporting technological education, it awards grants for projects that improve highway and sewer systems and community health care access.

ARC programs are expected to create or retain more than 23,670 jobs as well as train and educate more than 49,000 students and workers, Reuters reports.

Unfortunately, earlier this year, the Trump Administration proposed phasing out ARC as part of its “skinny budget.”

“We’re making sure the Appalachia workforce is prepared for jobs,” ARC Communications Director Wendy Wasserman told The Atlantic in March. According to Wasserman, ARC already has invested more than $73 million in projects across the region that include “teaching coal miners how to code, helping develop agricultural activity on former coal land, and training folks who would have been tracked into coal into solar installation or construction.”

GOVERNMENT FOR THE PEOPLE

Vox’s Matthew Yglesias makes a very compelling argument that “the federal government [should] take the lead in rebalancing America’s allocation of population and resources by taking a good hard look at whether so much federal activity needs to be concentrated in Washington, DC, and its suburbs.”

He was arguing that this redistribution should focus on the Midwest, in part, because the poorer areas of America like Appalachia lack “the basic infrastructure of prosperity.” We’d argue that he should spend some time in Pittsburgh, Pennsylvania; Chattanooga and Knoxville, Tennessee; Charleston and Huntington, West Virginia; Birmingham and Huntsville, Alabama; and Asheville, North Carolina, and their suburbs – all of which are well-positioned for growth and could welcome government agencies as comfortably as cities like Detroit, Cleveland, or Milwaukee.

Yglesias points to the National Institute of Standards and Technology, which employs nearly 3,000 people and is located in Gaithersburg, Maryland; the Woodlawn, Maryland-centered Center for Medicare and Medicaid Services (4,000 employees); and the National Weather Service, and its 5,000 employees headquartered in Silver Spring, Maryland, among others, as examples of major government agencies that do not require “routine physical proximity to elected officials” and have already relocated to the DC ‘burbs.

Bringing these important, high-skilled jobs to Appalachia could do wonders for regional and state economies, and provide their employees with a lower cost of living. And if all those government jobs were brought to Appalachia, they’d have a trickle-down effect that would create even more jobs in the region – after all, those government employees will need doctors and dentists, carpenters, plumbers, masons, and child care providers; and each of the professionals mentioned will frequent restaurants, movie theaters, and grocery stores.

More jobs means more state tax revenue to fund educational and medical resources and infrastructure that would improve the overall quality of life for the entirety of Appalachia.

And importantly – and contrary to unfortunate, unfair, and plainly false stereotypes – the workforce to fill these high-skilled roles long into the future is ready and waiting in the high schools of the region’s mountains and hollers.

HOPE IN THE HOLLERS

Steven Palmer, an English educator in eastern Kentucky, explained as much during an uplifting 2016 TEDx Talk (below), noting that Appalachia’s most valuable resource isn’t coal, it’s the “young, creative, critical-thinking minds that sit within its classrooms.”

“We cannot continue the narrative that Appalachia is a problem without a solution,” Palmer laments. “We need to believe in our students’ ability to disrupt the status quo of their homes. This can cause the largest young person-led economic revitalization in American history.”

Palmer is right, of course. And it’s a status quo that can be disrupted – by young people able to find good employment in their region, and by coal miners retrained to work in a twenty-first century economy, not a nineteenth-century one.

And it’s a disruption that could save thousands of lives. Covering the opioid epidemic crippling communities across West Virginia, Vice writer Juliet Escoria notes that the cycle of abuse and relapse eventually has less to do with the appeal of the high itself and is instead “about figuring out how to live life without [it].”

“Relapses don’t happen because someone offers you free drugs on a silver platter. They happen when the dumb s**t in life piles up, when you can’t find a job or figure out how to feed yourself like a normal human being,” Escoria writes. “They happen because your brain won’t stop telling you that you’re a piece of s**t.”

With that in mind, imagine an Appalachia where people could find well-paying jobs at all skill levels. An Appalachia were citizens knew they were contributing to their country the way they used to – only instead of providing raw materials like coal to keep the lights on, they’re facilitating government services to help others and creating the websites, applications, tools, and software solutions powering our plugged-in world.

So rather than dangle an unlikely return to former glories in front of the residents of these mountains, disrespecting the dignity and history of a proud people who helped build this country, let’s be realistic and do everything we can to start a new chapter.

And for any DC-dweller or Bay Area local worried about what a life outside of the concrete jungle looks like, here’s your new morning commute view: 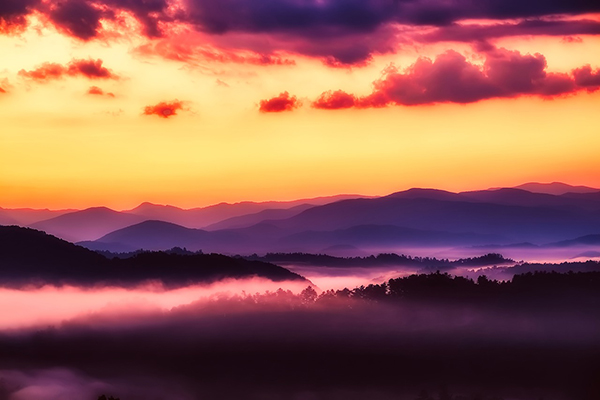 BMW i3 Is A Perfect Out-Of-Town EV, Smoothly Flowing Through Mountain Roads — BMW i3 vs. The Mountain (Video) → A UK Coal Power Station Closes, Signaling The End Of An Era →

i3 Arrives As The Sun Sets On Natural Blue Smoky Mountains →