Since 2009, Mark Jacobson, Professor of Civil and Environmental Engineering at Stanford University and Senior Fellow at the Woods Institute for the Environment and Precourt Institute for Energy, and more than 85 coauthors have written a series of peer-reviewed journal articles evaluating the scientific, engineering, and economic potential of transitioning the world’s energy infrastructures to 100% clean, renewable wind, water, and solar (WWS) power for all purposes by 2050, namely electricity, transportation, heating, cooling, and industrial energy uses.

Since 2009, Mark Jacobson, Professor of Civil and Environmental Engineering at Stanford University and Senior Fellow at the Woods Institute for the Environment and Precourt Institute for Energy, and more than 85 coauthors have written a series of peer-reviewed journal articles evaluating the scientific, engineering, and economic potential of transitioning the world’s energy infrastructures to 100% clean, renewable wind, water, and solar (WWS) power for all purposes by 2050, namely electricity, transportation, heating, cooling, and industrial energy uses. 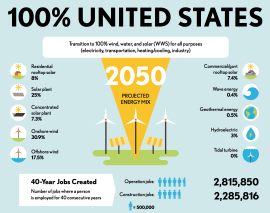 These papers have helped to shift the global conversation around the possibility of completely decarbonizing the world’s energy sector through renewables. They have helped to motivate a wave of 100% renewable energy commitments by over 100 cities and subnational governments, including 35 cities in North America, 100 large international companies, and 48 countries. California, the world’s 6th largest economy, just announced its 100% by 2045 renewable target and proposed U.S. House Resolution HR540, U.S. Senate Resolution SR 632, and U.S. Senate Bill S.987 calling for the United States to go to 100% clean, renewable energy by 2050.

In 2015, one of Jacobson’s papers was published in the Proceedings of the National Academy of Sciences (PNAS). It examined the ability of the electric grid in the United States to stay stable at low cost with a 100% WWS system across all energy sectors. The paper concluded that, indeed, grid stability is possible at low cost with 100% WWS. The article garnered a Cozzarelli Prize, an award given to 6 out of 16,000 papers submitted to PNAS each year.

During June 2017, an article was published in PNAS disputing the conclusions of Jacobson’s 2015 PNAS article. PNAS published the critical article as a Research Report with 21 “co-authors.” Of the 21 co-authors listed, only three admittedly performed research for the article. The remaining 18 names were added to gain credibility, a practice that is generally condemned by PNAS and other academic journals. Armed by what appeared to be a true scientific Research Report and bolstered by not one but two rather caustic op-ed style press releases, the authors were able to gain significant traction in the mainstream press.

To counter the misleading statements made by Clack et al., Jacobson created an exhaustive line-by-line rebuttal that was also published by PNAS, along with responses to news articles that came out in the National Review, Forbes, and the New York Times. As detailed in all these rebuttals, there were in fact no modeling errors as claimed by the authors. Of their dozens of misinformed claims, most were dismissed in the press, but one survived to be picked up repeatedly.

This claim was that it was not possible to increase the maximum discharge rate of hydroelectric power to the level Jacobson and colleagues proposed while simultaneously holding the annual average hydropower production from a reservoir constant. In fact, it is definitely possible to add turbines to the outside of any dam to increase the maximum discharge rate and control the overall flow so as to keep annual hydropower output constant. A very legitimate question would have been, what is the upper limit to the peak discharge rate? The critical paper did not ask that question. Instead, it merely criticized the attempt to model increased hydropower capacity as a way of load balancing.

The hydropower issue is of course a moot point, because there are many other 100% WWS strategies that do not require an increase in the maximum hydropower discharge rate at all. One such strategy might be to increase the discharge rate of concentrated solar power (CSP) with battery storage, as shown here. This result negates the prime contention of the Clack article.

One must ask why the authors were allowed to publish their article as a Research Report rather than a PNAS Letter to the editor. It is a widely accepted practice for academic journals to publish commentary on the scientific literature, but these commentaries never purport to be scientific “research.” PNAS policies, in fact, clearly indicate that the article should have been submitted as a Letter. Research Reports must contain new scientific research of significant importance, and the Jacobson hit piece did not contain any substantial research — it only criticized a previously published scientific paper, and with false claims no less. This is borne by the fact, among other reasons, that not a single one of 21 authors requested the time series data from the Jacobson paper until three weeks after they published the paper in PNAS. If the authors were performing true research, they would have certainly asked for data ahead of publication.

Nevertheless, nothing in the critical Clack et al. article impacts the results of Stanford’s 100% WWS study, which describes the technical and economic feasibility of transitioning to 100% wind, water, and solar power (with some geothermal, tidal, and wave power) for all purposes. It should be noted that Jacobson models an extremely rapid ramp-up of renewables on the grid — 80% by 2030 — which most would concur is not politically feasible. But it does show that even at such an accelerated growth rate, our energy supply would still remain stable. More importantly, a transition to 100% WWS by 2050 would create over 20 million long-term jobs, eliminate 4 to 7 million air pollution deaths each year, and allow us to stay below the dangerous climate threshold of 2 degrees Celsius in global temperature rise.

100% WWS is already on the way, as illustrated by many cities, states, and countries around the world that are increasing their use of wind turbines, solar panels, electric cars, electric heat pumps, energy efficiency measures, and a myriad of other clean energy technologies. Many NGOs (e.g., thesolutionsproject.org, 100.org, theRE100.org, go100percent.org, sierraclub.org, environmentamerica.org, and many more) are engaging communities, companies, and governments to increase the speed of the transition to 100% WWS. And so are investors. According to REN21’s Global Status Report on renewable energy, renewable power generating capacity saw its largest annual increase ever in 2016, and investments in renewables are steadily growing. In 2015, an estimated $312 billion were in investments, more than double the investment in coal and gas-fired power plants.

These signs are encouraging, but much more work needs to be done to transition the world to 100% clean, renewable energy. There are many ways we could get there, and Jacobson’s plan is just one. It is unfortunate that some in the academic community chose to gang up on this one researcher’s approach when instead they could have spent their valuable time adding to the body of scientific knowledge by putting forth their own plans for decarbonizing the energy sector, something the world urgently needs. 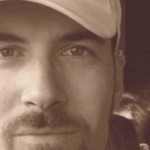 Karl Burkart is the Director of Innovation, Media & Technology at the Leonardo DiCaprio Foundation (LDF) overseeing the foundation’s website and social media properties, the Before the Flood website launched in tandem with the release of Mr. DiCaprio's climate documentary, and other initiatives supporting advocacy for key social and environmental issues connected to the work of the foundation. He also manages the portfolio of LDF grants that seek to scale innovation in both conservation and grassroots organizing. Karl received his Masters degree in Architecture with a special focus on passive energy buildings and environmental systems design. He was an early advocate in the green building movement and created an award-winning web tool used by architects and clients such as Kaiser Permanente to develop their sustainable design initiatives. He later went on to develop several online and mobile applications that help individuals and companies better understand their environmental impact, and he led digital advocacy for the TckTckTck campaign, a global network of 500 NGOs working for an international climate agreement. Karl also created the blog Greendig that explored the intersection between innovative technology and environmental sustainability and was the creator and producer of Planet100, the Discovery Network’s first daily online news show for the Planet Green network. He has authored over 200 articles on climate science, cutting-edge environmental solutions, and digital tools for public advocacy, with articles appearing in Mother Nature Network, Forbes, CNN, TrendHunter, Alternet, Huffington Post, SHFT, and CleanTechnica.