Big Auto gets a lot of criticism here. The problem for large automakers is that they will crush their own finances and have to write off massive investments if they rapidly shift to electric transport, but they are exposing themselves to great threat if they are too slow electrifying their offerings. Nonetheless, it’s hard to sympathize when gas & diesel cars & trucks are destroying our planet’s climate and countless humans’ health. Sometimes the moral high ground should trump the wrath of shareholders.

The good news is that electric cars are better, better, and better, so consumers should be on hand to happily help automakers make the transition and give up their insane obsession with burning stuff.

June’s US electric car sales are a good example of how one small and hesitant step from automakers leads to 10 enthusiastic leaps from consumers. Looking at the sales of automakers who report the monthly sales of their plug-in models, we can see that fully electric car sales grew 102% in June 2017 versus June 2016, and plug-in hybrid sales grew 11.5%. For the year through June, those fully electric car sales are up 96% and plug-in hybrid sales are up 42%. (Again, these numbers don’t even include Tesla’s rapid growth, since Tesla doesn’t report monthly sales or split out US sales from global sales.)

Aside from Tesla, GM and Nissan are leading on the fully electric car front, while GM and Toyota are top of the market when it comes to plug-in hybrids. Apart from BMW, these are the only major automakers that have put a significant amount of effort into the electric cars they have on the market today. It’s not that surprising that the companies that have put in the most work offering electric vehicles are the ones selling the most electric vehicles, but the big question is when they see this market as their most important growth market and offer several original electric cars across popular car classes. 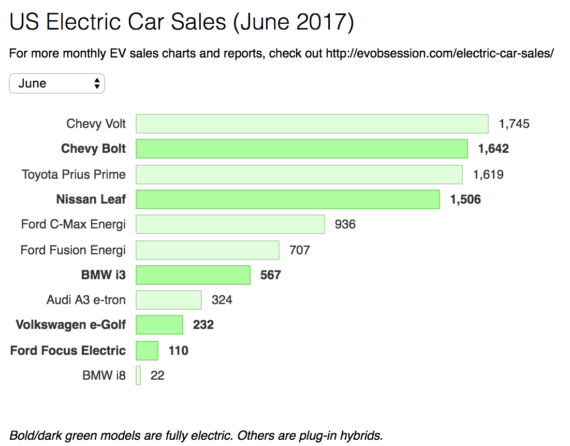 In the end, 1000–2000 sales a month will encourage automakers to keep electrifying, but it’s 20,000 or so sales a month that make an individual model one of Big Auto’s cornerstone and iconic offerings. That would be something like 3–4 years of 100% growth for GM’s Chevy Bolt.

It’s still hard to imagine a large automaker getting to 20,000 monthly sales of an electric model by 2020, but maybe they will be inspired by demand for the Tesla Model 3 and maybe they have enough magic up their sleeves that we can be positively surprised by the time the next oil-funded US presidential election comes around.