Two key moves this year will propel San Francisco’s toward an all-renewable electricity mix by 2030, potentially making the city — the 13th largest in the nation — a model for others eyeing a similar transition. 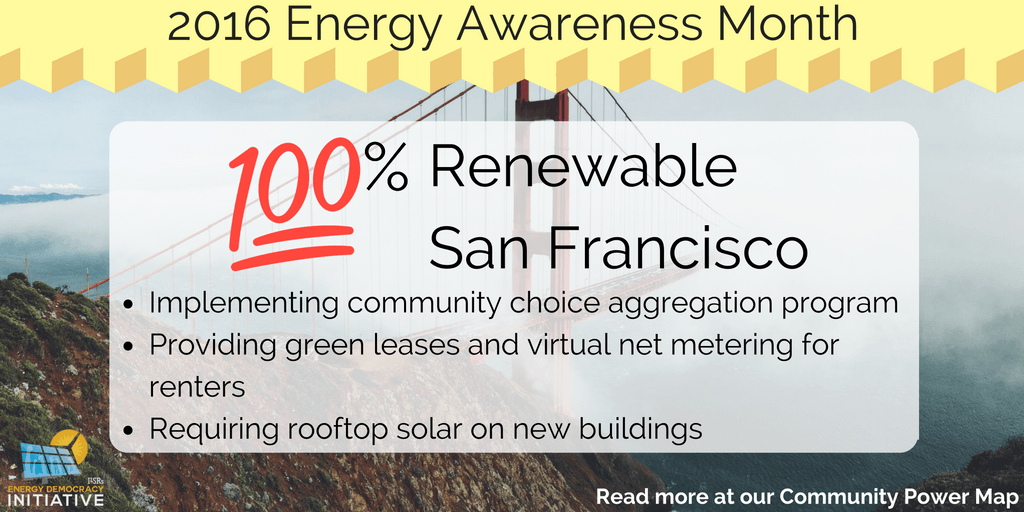 In April, city policymakers approved a plan that makes San Francisco the first major US city to require rooftop solar generation on new buildings. The mandate covers all residential and commercial construction up to 10 stories, expanding on an existing state law that required new buildings to equip at least 15% of roof space for solar.

Just weeks later, San Francisco fired up its long-awaited CleanPowerSF program, which puts the city in charge of choosing the electricity sources for all residents and businesses, giving it purchasing power to procure more clean energy (the framework is commonly called community choice aggregation). The city’s initiative starts with 40 megawatts (MW), but will eventually expand to 400 MW and cover 300,000 customers.

Other cities, like San Diego, are exploring similar strategies to cut dirty power.

For now, San Francisco’s community choice program relies mostly on wind generation, though the city intends to use incentives to increase solar generation capacity. It also plans to use a feed-in tariff to allow developers to build renewable projects including solar arrays in San Francisco, then sell their energy to the city at a set price on a long-term contract.

A 2012 report showed the city’s electricity was already 41% renewable-generated, thanks to municipal solar, hydroelectric, and biogas facilities. But the 100% initiative hinges on wide-reaching reforms, including the growth of the city’s community choice aggregation program.

Ultimately, San Francisco expects to offer all electricity customers an option to purchase 100% of their power from renewable sources. After years of planning, the city has a clearer action plan than many others targeting an all-renewables future.

Built on a Bedrock of Existing Energy Plans

City-run assessments help property owners pinpoint upgrades that save energy and money. Homeowners can reduce energy consumption by 33%, on average, through deep retrofits that most often include better insulation and efficient furnaces, according to a study commissioned by the city. Technology that enables households to curb energy use, like smart thermostats and smart outlet plugs, present an opportunity to drive down consumption even further.

In most cases, the city study found, the home improvements knock consumption to a level that could be supplied by on-site renewables, like rooftop solar panels. That distributed generation — small-scale local power production that gives communities more control over their energy — is a key prong in San Francisco’s vision.

The city’s loose playbook for the renewables transition does not set a specific threshold for distributed generation, but it has pointed to local generation as a significant contributor to its success in hitting new benchmarks for renewables.

“While it is not possible to supply all of the city’s electricity with in-city renewables, fully utilizing San Francisco’s available resources is an important first step toward meeting the 100% renewable goal and increasing local control and energy independence,” its 2012 report says.

Beyond the feed-in tariff designed to boost solar generation, the city has outlined a series of other potential incentives to nudge residents toward distributed projects, including lowering upfront costs through specialized financing and solar leases.

Reaching Beyond Homeowners and Bill Savings

The city also plans to promote green leases and expand virtual net metering to pass savings on to its sizable renter population. The former redesigns rental agreements to spread incentives tied to energy efficiency to both property owners and their tenants, while the latter allows tenants to share the energy savings from a commonly owned solar array on their building.

San Francisco’s focus on distributed generation comes, in part, because the city sees potential for significant long-term gains. More widespread adoption translates to an all-around economic boost for the community.

Taken together, San Francisco’s steps so far set a solid foundation for a marketplace that favors renewable energy and customer control, securing the city a place in the fast-emerging clean energy economy.