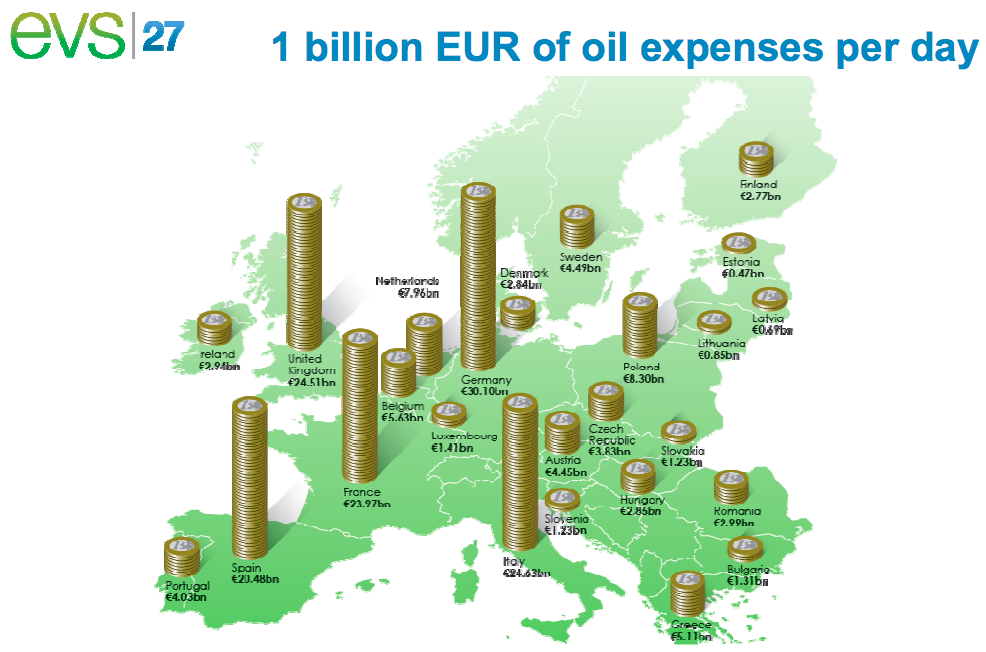 But that 20th century thinking misses why electric cars are really patriotic bulldogs of any country they are sold in.

Furthermore, that simplistic approach to the economic potential of electric cars misses why electric cars should be seen as best friends of our troops and our troops’ families.

How much does our military presence abroad protecting our oil interests cost the United States? Some estimates of what were widely seen as “oil wars” run into the trillions. (Trillions of dollars, not trillions of bushels of good ideas.) And that also ignores the simple fact that we send out billions and billions of dollars (or euros, as the chart above shows) in exchange for oil.

How much money, how many lives, and how many families would the United States (or … pick your country) save if the nation electrified its transportation fleet?

And for anyone who thinks “the United States could just produce all its oil needs itself,” you should check your water supply (it might be tainted). The US can’t provide all of its own oil needs not because of some pesky environmentalists (who don’t want their kids or your kids to die of cancer) … but because we can’t. It’s just not going to happen. Believing in energy independence purely through drilling, drilling, drilling (baby) is similar to believing in the tooth fairy. But there is an obvious solution to really create energy independence (while also massively cutting cancer rates, heart disease, and asthma) — go electric.

Electricity is produced domestically. Cars like Tesla’s Model S, Model X, and Model3, Nissan’s LEAF, and Chevrolet’s Bolt & Volt are produced domestically. When you drive one of these electric cars, you can feel good that you are supporting US manufacturing, and you can feel good that you aren’t supporting dictators in unfriendly foreign countries.

That’s all the more reason why Tesla sales bans are idiotic and shockingly undemocratic, of course.

Now, you might think, “Hey, we have a big oil industry — why not support that too?” Frankly, even that doesn’t make sense. US oil companies can ship their oil abroad or domestically to earn money. They aren’t limiting production because of limited demand. Cutting domestic oil demand would more or less mean exporting more oil — feeding a trade surplus rather than a trade deficit. The US oil companies and their employees still make money, but so do power plant developers and utilities (and perhaps US solar panel manufacturers if you power your electric car with rooftop solar panels).