Despite an American fascination with big things, the key to unlocking renewable energy is found in small packages as well as big ones. And one key to understanding the debate is to understand the players, with incumbent utility companies (and their incentive to build big things to make money) playing an outsize role in the debate over the right size of wind and solar.

Why Economics Isn’t the Issue

Despite an American fascination with big things, the key to unlocking renewable energy is found in small packages as well as big ones. And one key to understanding the debate is to understand the players, with incumbent utility companies (and their incentive to build big things to make money) playing an outsize role in the debate over the right size of wind and solar.

At stake is $364 billion a year in electricity sales, which individuals and communities have an opportunity to retain rather than send to utility companies. Every megawatt of solar installed, for example, adds $2.5 million and 20 construction jobs to the local economy. In its 25­-year lifetime, a locally owned solar project will redirect an additional $5.4 million of electricity spending back into local pockets, instead of to utility shareholders. The calculus for wind power is similar, with local ownership returning as much as three times more jobs and three times greater local economic benefits as non­local ownership.

Below is part three of our Is Bigger Best? report, a report released in September 2016. Conventional wisdom suggests the biggest wind and solar power plants will be cheapest, but where they deliver power, and who will own them, matters more. Be sure to read parts one and two from last week.

For nearly 100 years, electric utilities have enjoyed protected status as regulated monopolies. While regulators have changed some elements of the market, explained in the chart below, most utilities still rely on increasing sales of electricity and the capital deployed for new power plants for their revenue and profits. 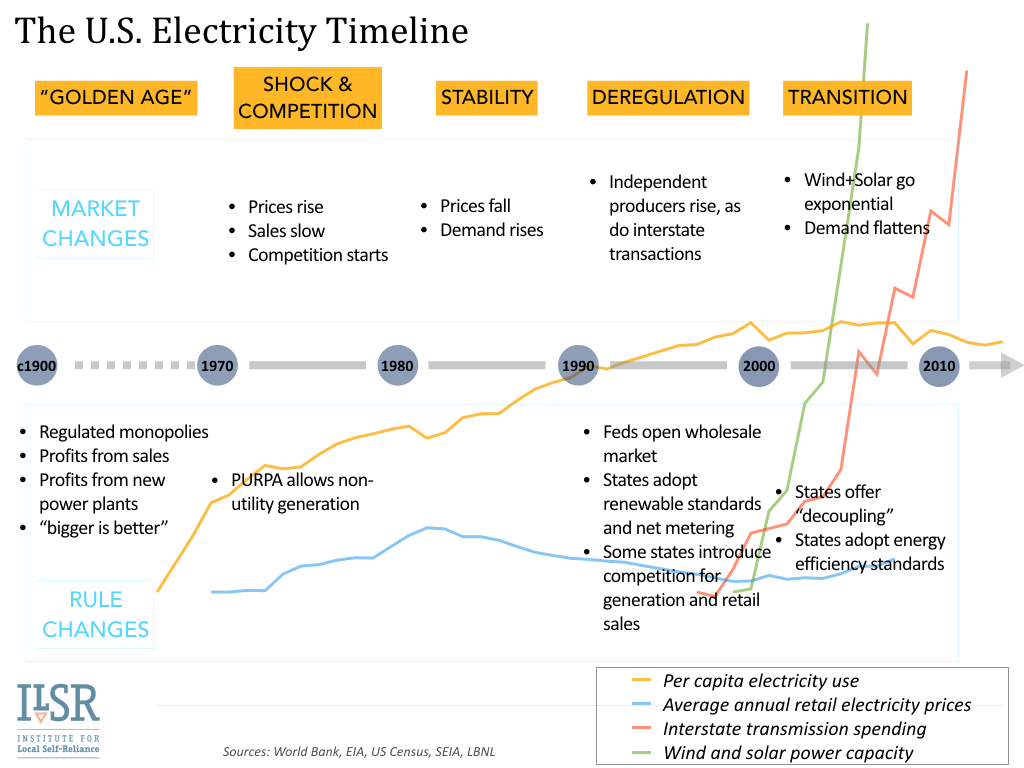 The economies of scale debate isn’t so much about the cost of power (generation) as it is who retains the power (of ownership) over the electricity system. If the utility owns large­-scale solar and wind projects or buys power from big ones, it will still need to deploy capital to bolster the transmission system (and earn a return on that investment). But if trends continue, and electric customers instead reduce their purchases with efficiency and by producing their own electricity (e.g. with rooftop solar), the old model falls apart.

The utility response to this trend shows they understand this fear of business failure.

The Brattle Group’s 2015 study exhorting the benefits of utility­-scaled solar was financed by the Edison Electric Institute, the trade organization representing investor­-owned utility companies. A 2013 study from Edison noted that competition from customer­-owned distributed solar was an existential threat to their business model, and a 2014 report from Berkeley Labs confirms this fear: more solar won’t be bad for customers, but it could be really bad for utility shareholders. The graphic below is from the report and annotations were done by ILSR.

The top row of charts shows that as customers supply more solar PV, utility return on equity falls sharply for the hypothetical Northeast utility, in particular (by 18% when solar provides 10% of electricity). Earnings, shown in the next row of charts, also fall by 8% for the hypothetical Southwest utility and 15% for the Northeast utility when solar provides 10% of the utility’s electric needs. In contrast, the last row of charts shows that the impact on customers to be relatively small, with rates rising less than 3%. 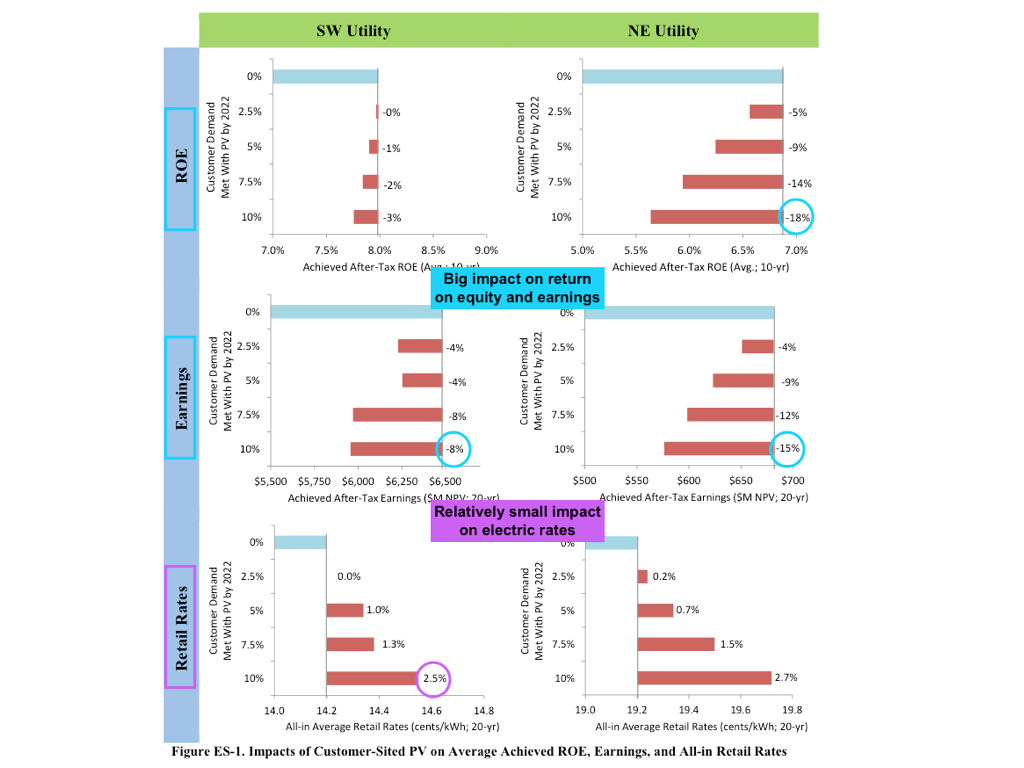 The relative costs of distributed solar to the customer versus the shareholder help explain the political landscape for solar, where utilities are fighting rearguard actions against net metering and other policies that support distributed solar across the country. 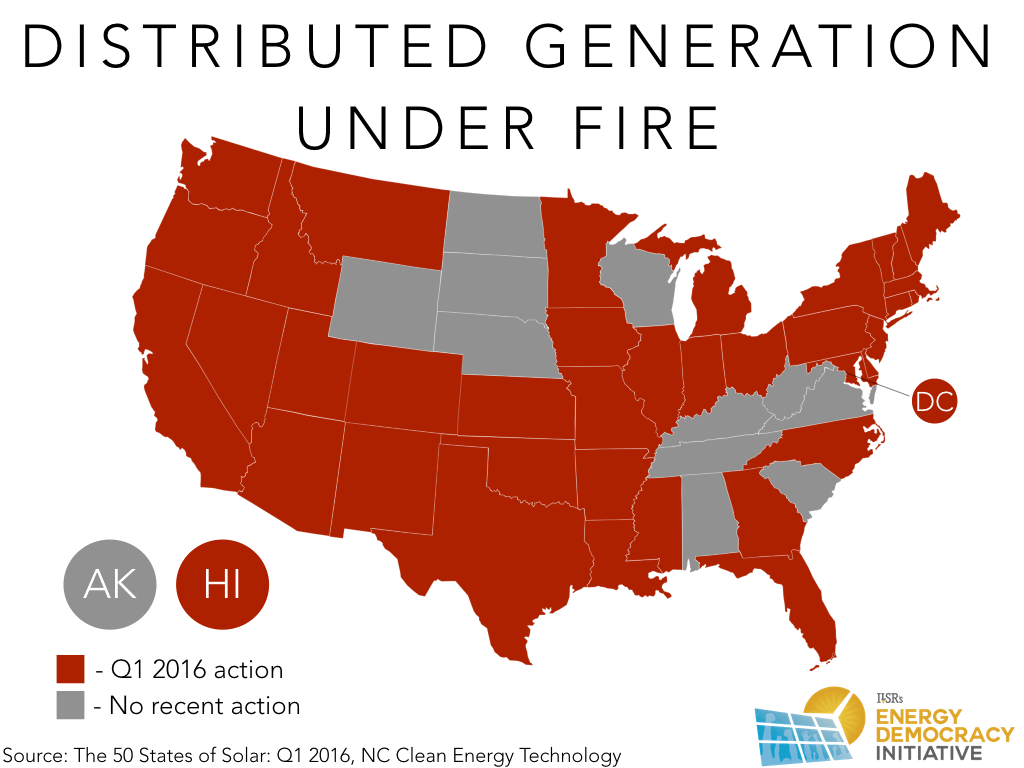 The poor outlook also explains why utilities are trying to change the language of renewable energy, to favor their continued control and ownership. In their Orwellian newspeak, rooftop solar becomes “private solar,” in contrast to “universal solar” that utilities will own and control.

In a 100% renewable energy future, there’s room for big, utility­-scale wind and solar and distributed renewables, too. Understanding the relative cost of our investments matters, because resources are limited. But understanding the relative benefits (and the recipients) matters, because making the transition doesn’t require us to remain married to a century­-old and increasingly archaic business model.

The economic arguments between big and small can’t be taken at face value, because the largest players have a vested (dare I say oversized?) interest in the outcome. Can scale economies generate cheaper electricity? Sometimes. But smaller renewable energy systems can also compete at the retail level, where their relative benefit (and the costs they offset) is also higher.

The choice between big and small is more than a spreadsheet analysis. Instead, it’s an argument about whether the economic windfall of the renewable energy transition will accrue to the incumbent players or whether tapping the wind and sun in communities across America will result in benefits everyone can share.

Full report available at ilsr.org. For timely updates, follow John Farrell on Twitter or get the Energy Democracy weekly update.

Appreciate CleanTechnica’s originality and cleantech news coverage? Consider becoming a CleanTechnica Member, Supporter, Technician, or Ambassador — or a patron on Patreon. Don't want to miss a cleantech story? Sign up for daily news updates from CleanTechnica on email. Or follow us on Google News! Have a tip for CleanTechnica, want to advertise, or want to suggest a guest for our CleanTech Talk podcast? Contact us here.
In this article:Edison Electric Institute, Institute for Local Self Reliance, Is Bigger Best?, Utilities