To be fair, we don’t yet know what Donald Trump’s precise climate approach will be, but it seems all but guaranteed that he will slow and obstruct climate action and will do a “great deal” to increase pollution and CO2 emissions from the out-of-date oil, coal, and gas industries.

This is idiotic not just because it puts all of human society at great risk, but also because it’s one of the worst economic moves a politician can make. I’ll run down three reasons why in the bulk of this article, but let’s first highlight some positive climate policy news from other economic and energy giants — India isn’t going to pull back its climate efforts no matter what Trump does (CleanTechnica exclusive) and China is already announcing that it’s willing to take the lead on climate action (a position it will milk as part of an overall global power grab in the coming years). To be frank, no country with sane leadership is going to hurt both itself and the world by going slow on cleantech growth. Here’s why:

At the opening of the World Future Energy Summit earlier this week, former president of Mexico Felipe Calderón had some powerful energy statistics from the US to share — there are approximately 70,000 coal mining jobs in the US today, whereas there are over 200,000 solar energy jobs there (exclusive video and more commentary coming).

In a separate interview with Adnan Z. Amin, Director-General of the International Renewable Energy Agency (IRENA), Amin dropped some similar stats on us — 85,000 people work in the coal industry in the United States, whereas approximately 400,000 people are employed in renewables in the US. For a little further context, that equals ~5% of the global renewable energy workforce. 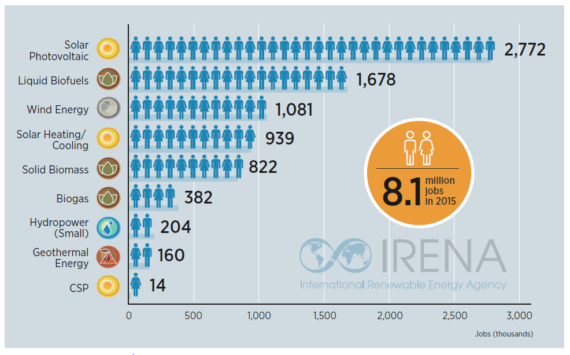 Even today — with coal accounting for ~30% of US electricity and solar accounting for ~1% of US electricity — solar jobs outnumber coal jobs. Solar power and wind power have both become cheaper than coal power (by far) and almost no new coal power capacity has been added in the past few years (renewables have dominated new capacity and natural gas has accounted for almost all of the rest).

Hastening the energy transition would create thousands and thousands of new jobs, whereas delaying it would make the US economy more stagnant and weaker. Hastening the energy transition would result in many more solar and wind energy power plants and distributed systems on homes and farms across the country, whereas delaying it just means burning more coal and natural gas in old power plants, polluting the lives of more Americans, and allowing coal and oil billionaires to stuff more cash into their over-inflated bank accounts.

The basic economics of renewables isn’t going to change, but weakening or crushing the Clean Power Plan would allow old, dirty coal power plants to remain open (and cause premature death to countless American citizens), which would mean a slower increase in renewable energy jobs. Put very frankly: the number of renewable energy jobs that approach would keep off the market is a larger number than the number of coal jobs that would be saved for a few more years. Any efforts to let oil & gas companies pollute more and any efforts that allow more natural gas power plants to get built will of course harm human health — they will harm the health, quality of life, and lifespan of real American citizens. However, again, there is also likely to be a jobs hit. Part of the beauty of wind and solar power is that these are highly distributed power-generation technologies that require a great deal of local work for installation. Additionally, some of the largest manufacturers are American (GE for wind turbines, SunPower and First Solar for solar panels, etc.). Much of the cost of natural gas is simply for the fuel and is funnelled to billionaires and multimillionaires at the top of this industry — buddies of Donald Trump, perhaps. Renewable energy is the real job creator, not natural gas.

Efforts to hurt electric vehicle growth will hurt US manufacturing as well — Tesla is based in California and Nevada, the Nissan LEAF is built in Tennessee, the Chevy Bolt is produced in Michigan, and other electric cars are or will be manufactured in the US.

At one point last year, we highlighted that the fastest-growing job in the US was the job of a wind turbine technician. It seems that Trump won’t promote this job or industry since he has a long history of anti-wind behavior, but for his own sake (and the country’s) it would be quite helpful if he didn’t obstruct continued wind energy growth. When the US wind market grows, US wind turbine manufacturing grows. The best way to hurt US wind turbine manufacturing is to hurt the US wind energy market.

I think Donald Trump is actually keen to make the US energy independent, but he also seems to be clueless about how limited US fossil fuel supplies are, and he seems to be prejudiced against the country’s largest energy resources — sunshine, wind, and water.

If you really want to bring the country to energy independence, you have to focus on renewables. Fossil fuels will only last a short period of time. Furthermore, fossil fuel markets are global fuel markets and we aren’t going to stop importing fossil fuels even if US production increases a great deal. The only way to achieve real energy independence is to switch to electric transport and renewable energy.

Renewable energy and electric transport is the future anyway, but the sooner the country gains true energy independence from renewables and EVs, the sooner we won’t be subject to instability and price swings related to oil and gas dependence.

The basic goal of true energy independence, of course, is to stop exporting cash overseas for fuel we are overdependent on and to stop spending a great deal of money and sacrificing human lives to “protect” oil and gas resources in the Middle East and elsewhere. Electric transport and renewable energy enable that. Crippling these young markets doesn’t.

Cleantech Industries Will Eventually Center Around A Few Corporate Leaders

Mature industries are typically dominated by a handful of core corporations. There are various factors that lead to this, but the point is that only a handful of survivors will dominate clean energy and EV manufacturing once these are very mature global markets. By helping US companies lead the way at this time, the US government is more likely to create long-term value for its citizens.

Currently, major US players in solar manufacturing include SunPower, First Solar, and Enphase Energy. In wind, General Electric (GE) is a leading wind turbine manufacturer (sometimes #1 globally, particularly when the US wind market is hot). In electric vehicles, US-based Tesla and Proterra are early leaders.

None of these companies are guaranteed a place at the table when these markets are much bigger. They have a good running start right now, but they will have a much better shot at strong growth and long-term dominance if the US government further stimulates and encourages the US solar, wind, and EV markets — as well as cleantech manufacturing between the Atlantic and Pacific. Demand-side stimulus and supply-side support are both important right now to help the US economy in the long term.

Any moves to diminish climate action in the US and thus weaken our solar, wind, and EV markets are likely to handicap our early cleantech manufacturing leaders. We’ve already seen German cleantech companies dramatically hurt or gone bankrupt after Germany pulled back on its cleantech leadership, and the same has happened to a lesser extent in the UK and Japan. US and Chinese companies have grown their global market share as a result, but these industries are still young and changing fast.

The US can open the door for other cleantech manufacturers to dominate the global market (like China’s BYD, several Chinese solar & wind equipment manufacturers, Japan’s Panasonic, and South Korea’s LG Chem and Samsung SDI), or Trump and his cabinet can work to further stimulate US cleantech leadership and overall economic growth. The latter would help the US in the coming few years, but even much more so in the coming decades. If Trump doesn’t think it’s important to stimulate and support these high-potential cleantech industries, he’s going to miss out on probably the most promising manufacturing potential of the 21st century. If Trump moves backwards on climate and cleantech leadership, US companies will be hurt and foreign companies will take more of their global market share.

Donald Trump doesn’t need luck in order to grow the US economy and US jobs. He just needs to follow Obama’s lead — support the extremely fast-growing cleantech transition, support climate action, help to close down super old and dirty fossil power plants (which will largely be replaced with solar and wind power plants), provide policy stability for the investment and corporate community, and don’t screw around by trying to protect dying industries that are going to lose in competitiveness and collapse in the coming decades anyway (that’s like trying to stick Band-Aids on a broken leg and hemorrhaging organ).

China is eager to come in and eat America’s lunch. It’s eager to take tens or hundreds of thousands of solar, wind, and EV manufacturing jobs from the US in the coming years. Donald Trump can go on Twitter to try to change the story, but that’s not likely to be very effective. Entertaining? Sure. A “good” way to bully people and brag? Maybe. Useful for growing American companies in the hottest global markets? Not so much.

Do we have any strong signs that Trump plans to maintain US leadership in these fast-growing global industries? No. Indications that Trump’s administrators will slow fossil power plant retirements in the US, permit greater pollution in the US, kill programs supporting EV and clean energy manufacturing in the US, kill federal support for EV and clean energy adoption, and focus international relations around oil & gas extraction rather than climate action all indicate that Trump is headed in the wrong direction and the US economy will suffer as a result — during Trump’s presidency, but even much more so in the decades that follow.