When people pay their electric bill to an investor-owned utility such as Minnesota’s Xcel Energy, they are generating energy for themselves, but the profit and wealth accrues to the utility’s investors.

But now, customers have an opportunity to buy in.

Community solar programs are popping up rapidly across the country, offering electric customers an opportunity to own a slice of solar energy production. Most are utility-owned, and almost all limit customer benefits to energy credits on their electric bill. But some community solar models are going further, letting the customers themselves take ownership. 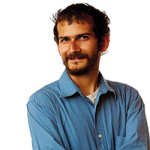 One such model is offered by Cooperative Energy Futures. It launched in Minneapolis in 2009 under the leadership of Timothy DenHerder-Thomas (pictured, left), offering members energy efficiency upgrades and renewable energy installations on their own property. Now, thanks in part to a 2013 state law, they’re offering members an opportunity to “own” a share of a community solar garden atop a North Minneapolis church.

In September 2015, DenHerder-Thomas stopped by ILSR’s studio to talk with John Farrell about the Shiloh Temple Community Solar Garden, and what community-owned power means for the energy industry and everyday people.

Most proposed Minnesota solar gardens are one megawatt arrays built in the countryside, on inexpensive open land. Their owners, says DenHerder-Thomas, are solar developers (at least in Minnesota), making their return on investment from the construction of the solar gardens. It’s not a bad model, and it takes advantage of Minnesota’s nation-leading community solar law that provides a reasonable value for solar compensation and unlimited capacity in the program.

The aims of the Shiloh Temple community solar project are different from a developer-driven model, says DenHerder-Thomas. The project is smaller, just under 200 kilowatts — enough to power 50 to 60 homes. It’s built on the roof of a community building, close to its subscribers. It’s also financed mainly through Cooperative Energy Futures’ member-owners, which means that any return on investment (either from the profits off of subscriptions or the long-term savings after debt is repaid) will be returned to members as dividends.

Bottom line: the Shiloh solar garden is about maximizing the economic benefits of renewable energy for the community and member-owners.

Doubling down on local benefits, the cooperative will also train and hire local workers. Working with the Sierra Club and Interfaith Power & Light, Cooperative Energy Futures has set a goal of training between 150 and 200 local people to get jobs in the solar industry. Those North Minneapolitans — many of whom are people of color without steady work — who pass through the training program can expect to receive a job constructing the community solar garden at Shiloh Temple for $15 an hour. As they build experience, one of these workers might make upward of $20 an hour in the solar construction industry.

Community solar projects typically face a number of barriers. The Minnesota law helps to overcome one of the biggest: how solar arrays can share the electricity generated among many subscribers. A second major barrier is affordability, since even a small share of a shared solar project will cost several hundred dollars upfront.

Cooperative Energy Futures addressed the upfront cost issue to make a pay-as-you-go option for fixed-income members. Either paying upfront or along the way, as electricity rates are predicted to climb at 3% a year, the subscription is expected to save money for people who need it most.

The final barrier is the source of capital for constructing the array. With an attractive 30% federal tax credit, Cooperative Energy Futures, like other solar developers, has “tax equity” partners that help shoulder the upfront project costs and give access to the federal tax credit in exchange for a substantial share of the tax credit.

“The way that we finance renewable energy primarily through tax incentives is one of the greatest barriers to community ownership of clean energy,” Timothy says. “If the government could design incentives that wouldn’t just benefit those with a lot of passive income (very wealthy individuals and corporations)… it would really level the playing field.”

Ideally, Cooperative Energy Futures would be able to finance projects without the tax incentives, using just member equity. While Wall Street investors might view Shiloh’s return on investment as too low, a share here offers bill credits that are still better than the rate of return from a certificate of deposit or other low-risk investments.

It may be a good thing that the federal investment tax credit is expiring. Without the demands of large financiers, renewable energy developers may have more sources of capital (small and large institutional investors) and community projects would no longer operate at a significant disadvantage in accessing capital.

“If instead, we give people the opportunity to own and control their own energy, it’s a direct benefit to those communities…If we have cooperative ownership and local control, we get more dollars back from those clean energy systems. Cost is not the only factor. It’s, ‘Where does that payment go?’”

As of October 2015, 170 homeowners had expressed interest in subscribing to the array. In all, 67% of the array is subscribed, and according DenHerder-Thomas, it’s filling fast.

More information about Cooperative Energy Futures’ solar garden and its other initiatives can be found on its website: cooperativeenergyfutures.com.

This is the 34th edition of Local Energy Rules, an ILSR podcast with Director of Democratic Energy John Farrell that shares powerful stories of successful local renewable energy and exposes the policy and practical barriers to its expansion. Other than his immediate family, the audience is primarily researchers, grassroots organizers, and grasstops policy wonks who want vivid examples of how local renewable energy can power local economies.

Appreciate CleanTechnica’s originality and cleantech news coverage? Consider becoming a CleanTechnica Member, Supporter, Technician, or Ambassador — or a patron on Patreon. Don't want to miss a cleantech story? Sign up for daily news updates from CleanTechnica on email. Or follow us on Google News! Have a tip for CleanTechnica, want to advertise, or want to suggest a guest for our CleanTech Talk podcast? Contact us here.
In this article:audio, cooperative energy future, electric cooperatives, local energy rules, Minneapolis, Minnesota, podcast