For the first time since 1972, energy-associated carbon dioxide (CO2) emissions from coal are dropping below natural gas CO2 emissions.

The US Energy Information Agency’s latest Short-Term Energy Outlook reports that energy-related CO2 emissions from natural gas are expected to be 10% higher than coal emissions for 2016.

This is a classic case of good news wrapped in bad.

Tirelessly documenting the long, slow slide into statistical irrelevance, the US EIA is finally reporting the decline of Old King Coal’s reign of CO2 Terror. But the dictator’s death is not a cause for celebration. Natural gas has staged a coup.

Petroleum, at around 65 million metric tons of CO2 per quadrillion British thermal units (MMmtCO2/quad Btu), is more carbon intensive than natural gas and less intensive than coal. However, petroleum represents the larger responsibility for US energy-related carbon emissions due to its significantly higher consumption rate.

Petroleum processing is notoriously sloppy, too. 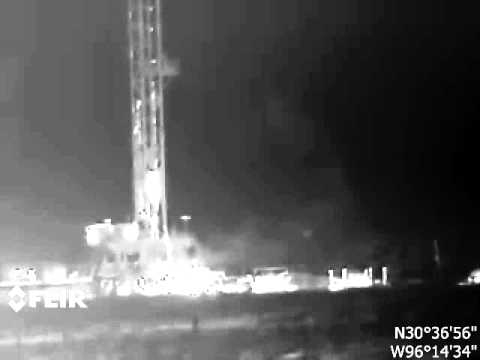 This scenario reversed in 2015. Both US coal and natural gas were measured at roughly 1.5 billion metric tons of energy-related CO2 emissions. Now, however, natural gas consumption is 81% higher than coal consumption.

The problem is, not all energy-related emissions are the result of annual consumption. Natural gas emissions occur throughout the pumping process, although they are invisible. Take a look at Humphreys compressor station in Ohio, documented by Earthworks using FLIR video by ITC certified Optical Gas Imaging Thermographer:

The US Needs a CO2 Reality Check

The rise of renewable energy sources in the US helps reduce our overall average carbon intensity. This offsets our emissions load somewhat because non-fossil-fuel energy sources produce no carbon emissions. The US EIA notes that, although natural gas and petroleum use increased in the last few years, non-fossil fuel use has also increased and coal consumption has declined. As a result of these recent developments, the EIA reports that in 2015 US total carbon intensity is at 54 MMmtCO2/quad Btu, down from 60 MMmtCO2/quad Btu in 2005. This looks pretty good on paper. …

However, just in case it sounds like everything is going swimmingly for the US, here’s a CO2 reminder + reality check:

Witnessing the historic death of coal is not exactly generating excitement and celebrations, under the decidedly ironic circumstances. Let’s unwrap the bad news, all dressed up in the best duds money can buy.

Natural gas is a well-funded political “superstar,” paraded as a clean, cost-efficient, affordable source of energy (just google “clean natural gas”). It’s advertised as the perfect solution to US dependence on foreign oil.

But, is it really all that? The primary component of natural gas is methane (CH4), pumped out from deep in the earth via hydraulic fracturing. Methane is far more potent than CO2 in its effect on global warming and climate change. The US EPA reports, “Pound for pound, the comparative impact of CH4 on climate change is more than 25 times greater than CO2 over a 100-year period.”

In the US, hydraulic fracturing is used in 9 out of 10 natural gas wells, pumping millions of gallons of water, sand, and toxic chemicals underground. Under extremely high pressure, this toxic waste generates artificial earthquakes that break through the Earth’s rocky crust. Finally, this violent process releases “clean” methane, useful only for funding the political rise of Donald Trump and ludicrous pawns of the Koch Brothers and their ilk.

The ascendancy of hydraulic fracturing for natural gas feels more like a political coup than the welcome death of a dictator.

Meet the new boss, same as the old boss …