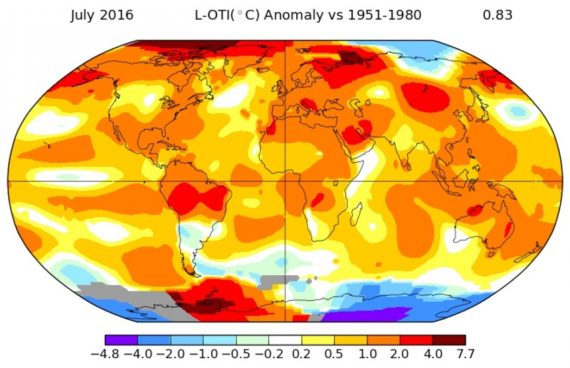 Continuing the record-breaking trend of earlier months this year, July 2016 has now been confirmed as the hottest July on record globally, going by new data released by NASA.

The record-breaking month follows a streak of record-breaking months going all the way back to October 2015 (using NASA’s data), and keeps the world on track for 2016 being the hottest year globally on record … just as a number of other years this past decade have been, including 2015 (despite the media’s absurd reluctance to talk climate).

Using NOAA’s data rather than NASA’s, the record-breaking streak goes all the way back to May 2015 — instead of “just” October 2015.

By NASA’s reckoning, July 2016 was 1.27˚F (0.84˚C) hotter than the 1951-1980 average. It was 0.2˚F (0.11˚C) above July 2015, the next warmest July in records that go back to 1880. The record July heat also means this was the hottest month the planet has seen over the course of NASA’s records. That’s because July is also generally the hottest month of the year due the fact that it’s summer in the northern hemisphere where there’s more land.

Schmidt said he expects July will be the last record hot month of this year as the residual heat from an exceptionally strong El Niño dies away. Though El Niño itself was declared over in June, global temperatures tend to lag by about two to three months.

Here are a few further notes to provide some context to this news:

Societal Collapse Isn’t A Good Choice From Essentially Every Angle