St. Peter, Minnesota, home to 11,000 people, is nestled within the verdant hills of the Minnesota River Valley. The town was originally intended to be the state capital of Minnesota, until a legislator named “Jolly” Joe Rolette nabbed the bill and hid it from the governor’s awaiting signature. Unflappable, the city would play its own part in state history by providing a home to five different governors.

The Nicolett County Courthouse in St. Peter, MN., whose city motto is “Where History & Progress Meet.”

Now, the city is debating whether to be home to another type of resident — solar arrays. Last October, the Director of Public Works Pete Moulton stated in his memo to the City Council that solar is cheaper than ever. Realizing this, more and more local customers, in addition to the five who have already gone solar, will seek distributed generation to power their own homes.

The prospect is a problem for the city utility. According to the compensation structure from net metering, rooftop solar generation is credited at exactly the same rate as purchasing retail electricity.

“It seems clear that we do not want to pay retail rates to someone (the [distributed generation] power producer) proposing to use our electric system to sell electricity,” he wrote. “The Utility needs to recoup this cost.”

The City Council, despite objections from a single council member and a few locals, voted 5–1 to commission a study on what rates to charge solar users.

What’s being studied in St. Peter mirrors a nationwide debate on how to value rooftop solar. All but four states were subject in 2015 to debates over efforts to change rules related to solar power development and compensation. On one end, there are utilities, who mostly see solar as a cost; on the other end, there are solar advocates, who see savings and value-added services (see image below).

Most solar fees were denied or withdrawn under the scrutiny of state public utility commissions. The few that did pass were substantially reduced. In Wisconsin, WE Energies’ fee on solar users (the users that represented 1/10th of 1% of WE Energies customers) was accepted by the state utilities commission but later rejected by a judge, who cited a lack of evidence for a cost shift from solar users to non-solar users. Advocacy group Renew Wisconsin said such a fee would have erased 25% of savings from solar for a typical homeowner.

The most dramatic solar fees are usually featured in the sunniest states with the highest penetration of people with rooftop solar (see below). In Hawai’i, for example, 12% of rooftops have solar, while sunshine in places like Nevada leads to large-scale solar being cheaper than natural gas or coal. In these states, utilities are penalizing all users in their attempt to curtail more distributed solar development. Demand or standby charges would increase the portion of a monthly electric bill that is fixed, reducing the ability of customers to reduce energy costs by adding solar or through other efforts, such as buying Energy Star appliances or turning off lights in unoccupied rooms. 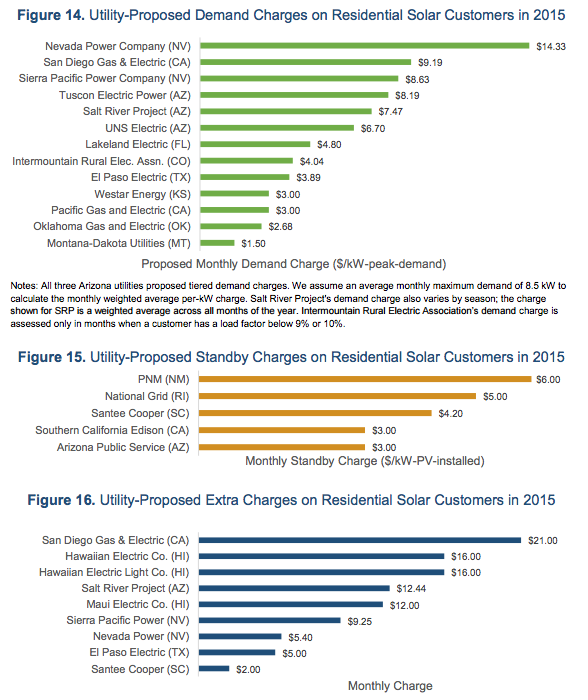 The actors in the debate are becoming more vocal as solar electricity becomes more competitive with utility-provided power. Warren Buffett, owner of several monopoly utility companies, says solar “could erode the economics of the incumbent utility.” Florida Power & Light and other Florida utilities have poured millions into fighting customer-owned solar in their state. Duke Energy, a monopoly, for-profit utility in North Carolina, has even suggested that the state fine a church that is procuring solar power without its consent.

Unlike Warren Buffett’s utilities, municipal utilities such as St. Peter’s usually do not have to answer to state regulatory commissions. Minnesota was an exception in the matter of limiting the ability of municipal and cooperative utilities to assess special fees on customer-owned energy generation. A new law in 2015 opened the door to such fees, but with an important caveat: before assessing fees (which have to be “reasonable and appropriate”), a cost of service study must be undertaken. Hence, St. Peter’s current study.

The city’s study of the issue shows better compliance with the law than many Minnesotan electric cooperatives that were enabled by the same 2015 legislation. Several have already implemented fees, but failed to produce the required cost of service studies.

A cost of service study falls short if it doesn’t look at the benefits of solar, says Bob Haug, former executive director of the Iowa Association of Municipal Utilities. “The problem with the [St. Peter] study as defined in the scope of service is that the consultant is asked to look at costs that could be applied to fairly treat both the utility and the [rooftop solar] owner,” says Haug in an email. “It is not fair to look only at costs.”

He says solar also reduces costs for the utility, creating value. When demand is high, solar can reduce the expensive need of firing up a “peaking” power plant and sending the energy out on long transmission lines. It avoids fuel purchases for power plants. It can reduce the need to purchase power on the wholesale market. It reduces emissions from natural gas- and coal-fired power plants, while providing other environmental or societal benefits.

St. Peter has access to some of the best data on the value of solar, thanks to a 2014 policy adopted by the state’s Public Utilities Commission. One utility’s value of solar tariff calculation — from Xcel Energy, serving territory adjacent to St. Peter —  determined that solar has a value of 12.4 cents per kilowatt-hour — nearly a full cent more than St. Peter residents pay for electricity.

By Xcel Energy’s calculation, solar energy in Minnesota is more valuable than: 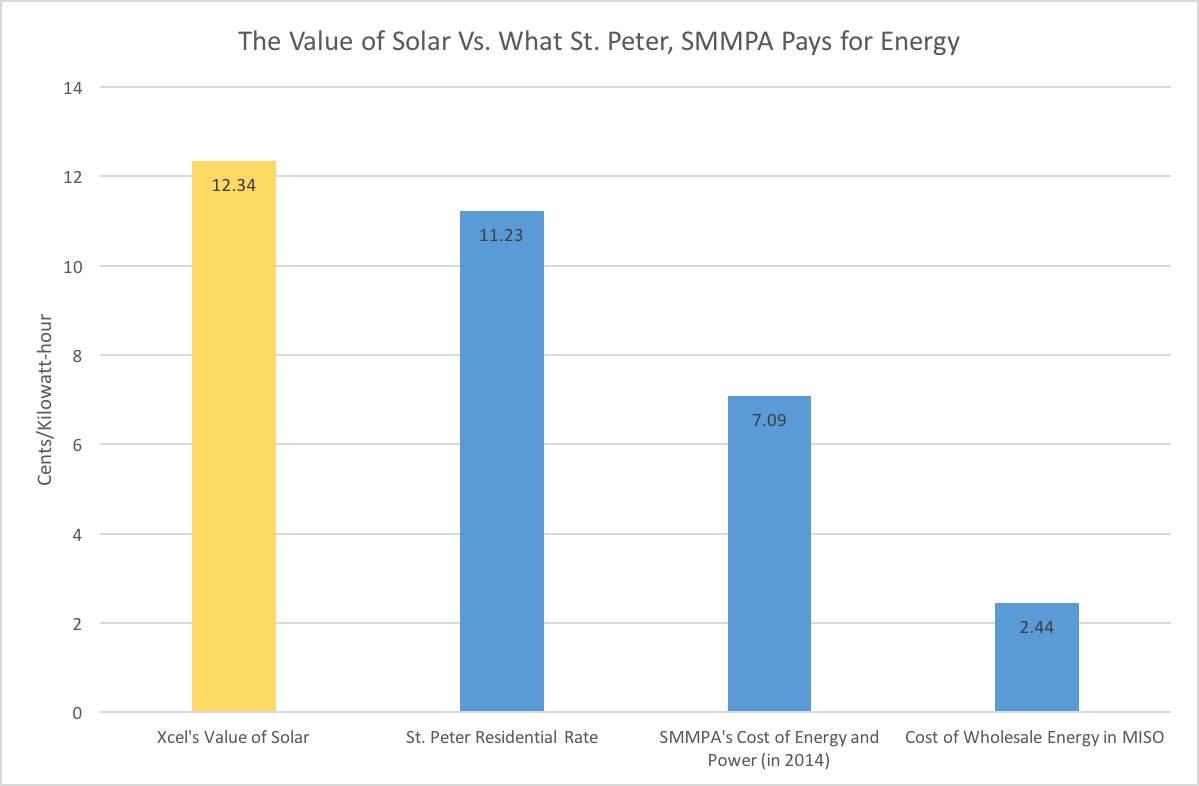 The relative high value of solar in Minnesota isn’t unique. Numerous studies from other states, especially those funded independently from the utility, show solar’s value higher than its costs. 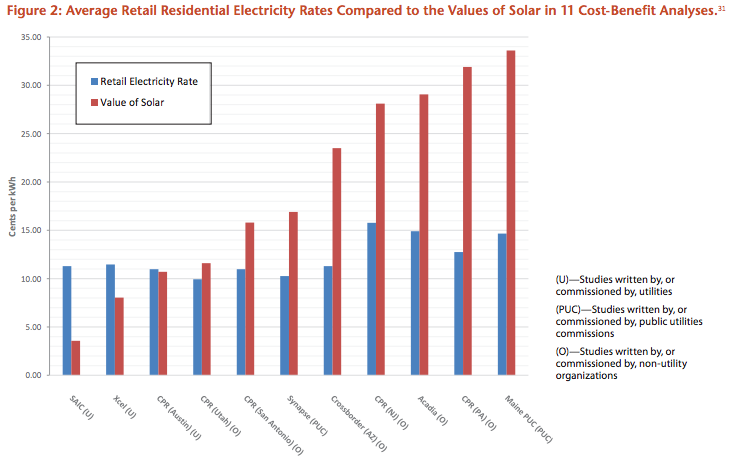 But St. Peter Municipal Utilities is caught in a particularly tight bind. Some revenue from power sales buoys the city’s general fund, making the loss of sales from solar (even if beneficial overall) a hit to the city budget. Additionally, the utility has an obligation to buy energy through its long-term purchase contract with the Southern Minnesota Municipal Power Agency (SMMPA), an alliance forged of 18 small municipal utilities to buy electricity in bulk.

Where Power Comes From

In the 1950s, municipal utilities were determined to free themselves from reliance on power purchases from investor-owned utilities. Under projections of exponentially increasing load, many pooled together their resources to form joint action agencies (like SMMPA), state-borne power companies that would take advantage of economies of scale to build huge power plants. The joint action agencies locked in municipal utilities under long-term contracts that required the municipalities to buy all of their energy from the joint action agency, with few exceptions for self-generation. These take-or-pay contracts are often extended for decades at a time, just long enough to ensure that debt could be repaid.

Joint action agencies, while formed to enhance public interests, ended up buying most often into enormous, privately operated power plants, a practice that continues today. The Southern Minnesota Municipal Power Agency was no different. Its 18 members rely heavily on Sherco Unit 3, one of the largest coal-fired power plants in the nation, owned and operated by Xcel Energy. Sherco Unit 3 supplies more than 80 percent of St. Peter’s yearly energy.

Big investments can unfortunately mean big costs, however, especially when electricity sales are flat (black line) and solar and wind prices (yellow and blue lines, respectively) continue to drop to or below SMMPA’s current cost of generating energy (red line). 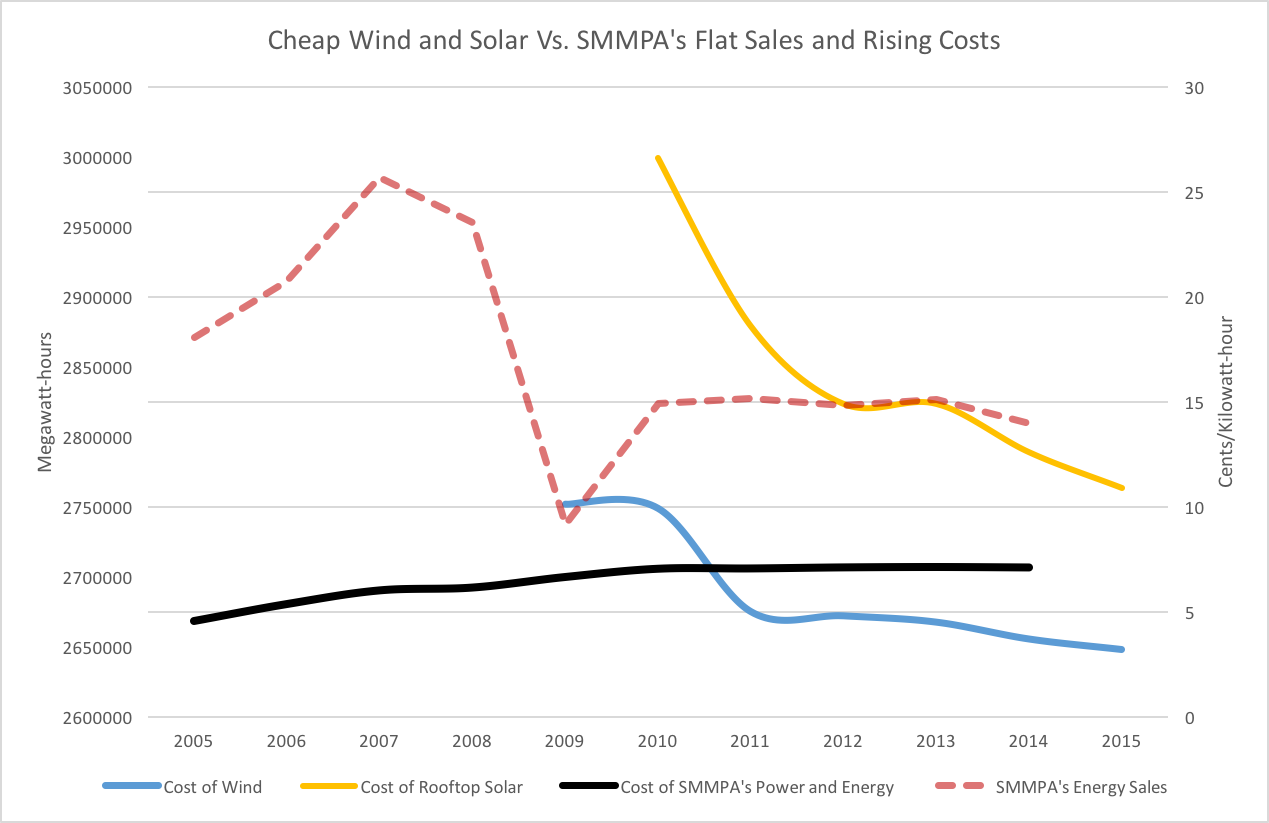 As mentioned before, falling sales puts the city in a bind. The city’s utility faces a 6% rate increase from SMMPA in 2016, and another 3% in 2017. Levying rate increases on customers isn’t something done lightly — it raises a philosophical question about getting revenue from electric bills or property taxes:

“If electric rates are not increased, the city would likely have to consider reducing the amount transferred into the general fund, the memo suggests, potentially resulting in higher taxes.

“A decrease in the transfer of $100,000 and a corresponding increase of $100,000 to our tax levy, would mean that a $250,000 valued home would pay an additional $62.89 in taxes, based on the 2014 valuation,” [St. Peter’s] memo says. “This issue is not just a numbers or money issue; rather it is a philosophical issue related to how you raise funding from both property taxpayers and the large number of non-property taxpayers within your community.”

St. Peter Municipal Utilities is caught between rate increases from SMMPA and the revenue needs of city council, which annually draws 6.5% of the electric fund to the general fund. On average, electric fund transfers average more than $650,000, about 1/10 of the city’s general fund, making the city somewhat sensitive to revenue changes.

Some cities have chosen to limit or cut off their take-or-pay contracts with SMMPA. Austin, Rochester, and Waseca — accounting for 58% of the agency’s sales in 2014 — will exit the contract in 2030. SMMPA’s 15 other members chose to extend their contracts to 2050.

Rochester, the largest utility on SMMPA’s system, seems empowered by the impending switch. Ardell Brede, the mayor of Rochester, announced last fall that the city would study going 100% renewable with their energy supply. Their goal date of 2031 is the year after their SMMPA contract expires.

After the solar fee study was commissioned, Faith Wicklund and a group of a dozen other St. Peter citizens organized house meetings with St. Peter councilmembers and utility personnel.

“They’re cozy and it gets their attention,” she says about the house meetings. “The ones we have met with have been wonderful. They’ve been very educational for us.”

Focused as a dialogue between citizens and the city, the River Prairie branch of Minnesota Interfaith Power and Light advocated for more solar in St. Peter, while city workers have been upfront that the issue is complicated — and the electricity bill needs to be paid to SMMPA every month, no matter what. Still, Wicklund says, the city and SMMPA need to figure out how to accommodate customer demand for renewable energy in St. Peter and other nearby cities served by municipal utilities.

On March 31, more than 50 people from St. Peter gathered for a conversation about solar. A representative from SMMPA attended, as did numerous people from the City and the municipal utility. Todd Prafke, St. Peter city administrator (pictured below, standing in the blue shirt), was quoted by the Mankato Free Press: “Let’s try to figure out something new where we can work together.” 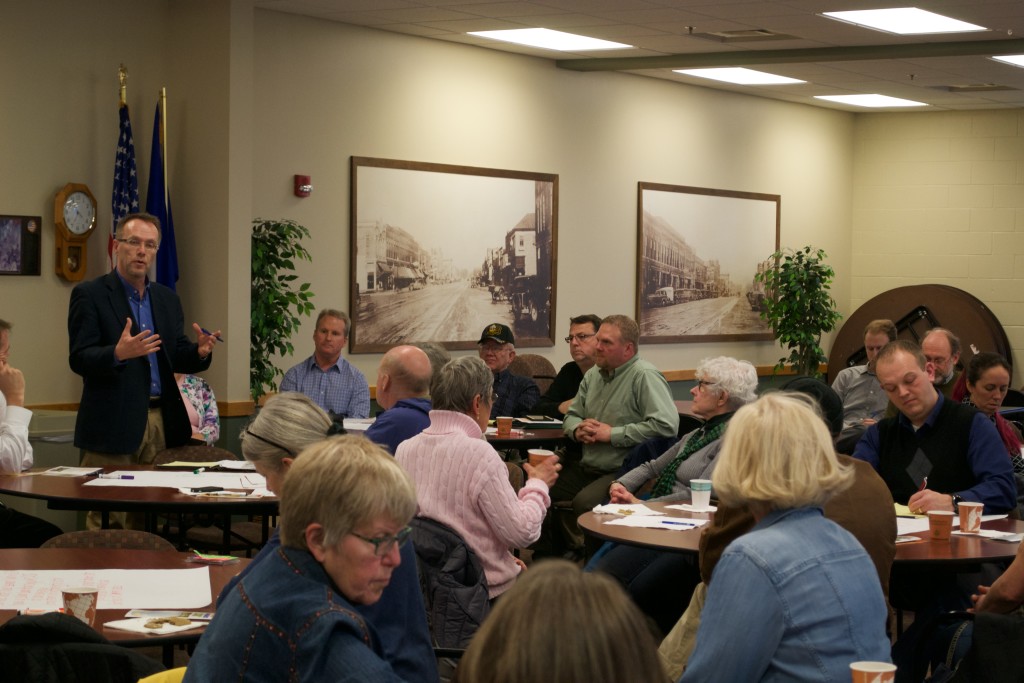 Claire Curran, Campaign Coordinator with Minnesota Interfaith Power and Light, wrote in an email that the meeting was at least a start to more conversations. “It seemed to me that the meeting served to bring out some of the underlying tensions, assumptions, and misunderstandings, and gave everyone the opportunity to better understand one another, and begin to get on the same page.”

Curran’s group is working to organize another public forum in late May, in partnership with Conservation Minnesota and Environment Minnesota. But St. Peter councilmember Jeff Brand, the dissenting vote on the solar fee study, is still looking at what the city could do better.

“We should actually be paying people to do [solar],” says Brand. “That’s what I think of when I think of my government taking care of my people in my community.”