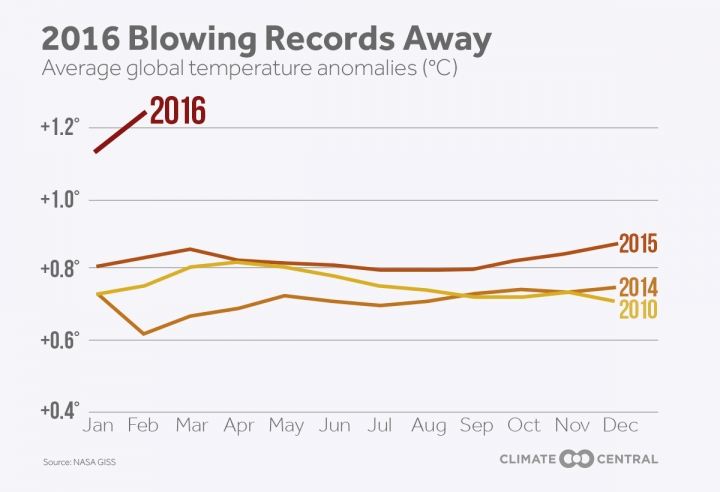 February 2016 was the warmest February on record by a substantial margin as well — 0.8° Fahrenheit (0.5° Celsius) warmer than the previous record February (1998). Which goes to show that, while the recurring El Niño event is certainly responsible for short-term oscillation, the long-term and accelerating warming trend is quite apparent anyways.

As the graph below shows, 2016 is shaping up to be a record-breaking year as a whole — one that will likely even blow 2015 (the warmest year on record) out of the water.

“I think we all knew this would be a warm year due to the major El Niño event. But I don’t think any of us expected such remarkable and persistent record-breaking warmth,” stated Michael Mann, a climate scientist at Penn State.

It was the 10th month in a row to set such a monthly record, tying a streak set back in 1944, according to data from the National Oceanic and Atmospheric Administration (NOAA).

During the last major El Niño event, there were nine months in a row that set global temperature records. Of those nine months — from June 1997 to February 1998 — only one remains in the top five for its respective month; most fall between ninth and 16th warmest today, a mark of how much Earth has warmed over the intervening years. One particularly notable aspect of last month’s heat was that it beat out January as the most anomalously warm month on record by a solid 0.36°F (0.2°C).

…February also marked the fifth month in a row where global temperatures breached the mark of being 1°C (about 2°F) above average. Countries have agreed on a goal of limiting warming to under 2° C (4°F) from pre-industrial times by the end of the century. The recent temperature departures have already hit that 2°C mark when compared to pre-industrial temperatures, albeit temporarily.

“This is the first time we’ve temporarily breached the 2° Celsius warming threshold, but it will become more common and eventually perpetual if we do nothing to stem the tide,” Mann noted.

On a related subject, record-low Arctic sea ice levels were seen in both January and February 2016 (record-low for the months in question) — 2016 is shaping up to be a record-breaking year for Arctic sea ice decline as well.