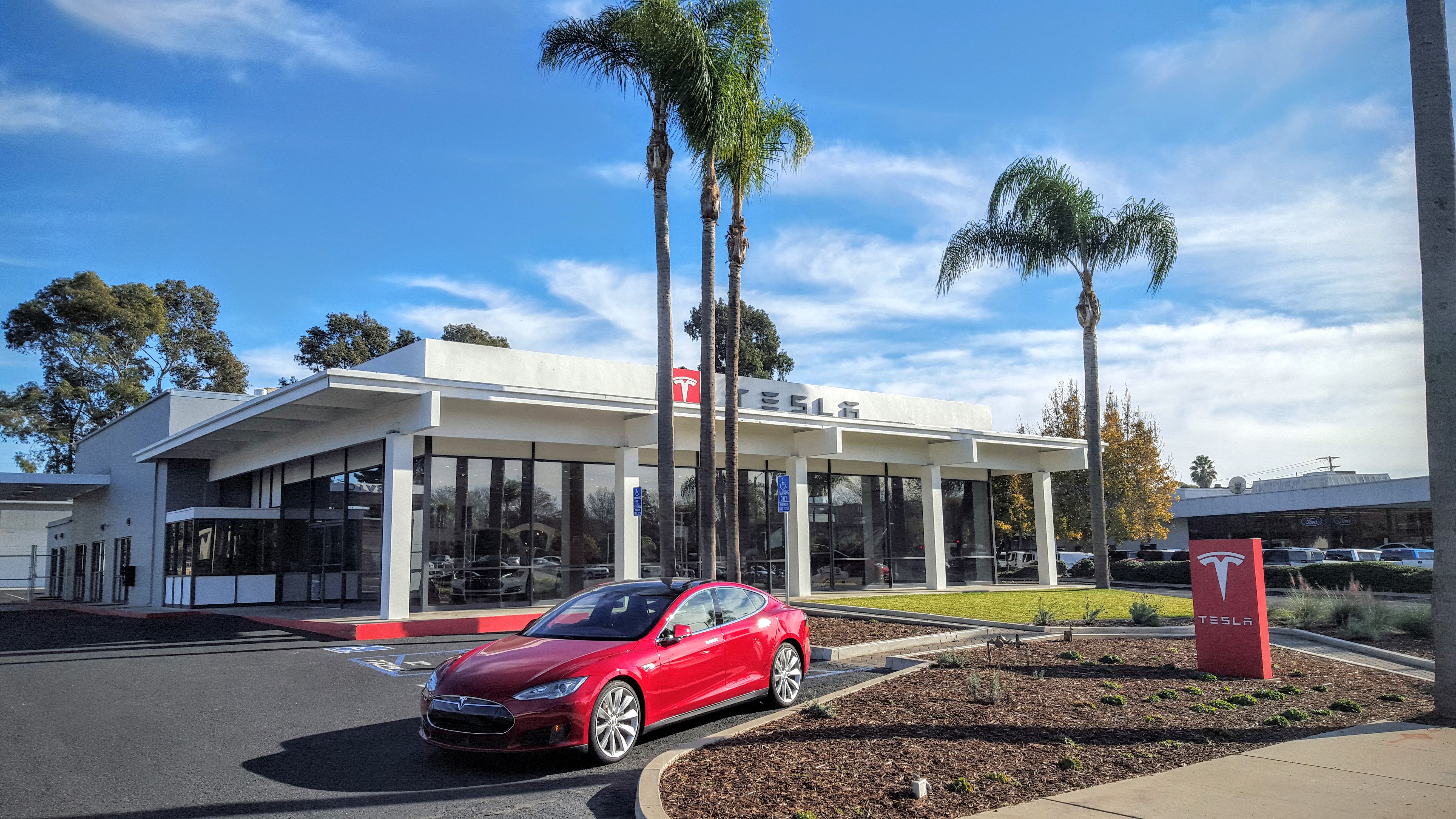 This past Sunday, my wife, kids, and I headed up to Santa Barbara and stopped in at the Tesla dealership that opened in August to see what a dealership looks like through Tesla-colored lenses. The short answer is — not very different, but that wouldn’t be telling the full story. Tesla is all about the experience. That comes through loud and clear in its dealerships, and I have experienced the same step-change improvement in its retail spaces as well.

The first thing that just calls out when driving up to the dealership is the empty lot. Tesla doesn’t keep a lot of inventory on the lot, which makes sense given what I would expect to be a high percentage of orders coming in online with built-to-order cars being delivered for customers. Having said that, it does seem reasonable that there are buyers out there who are used to the conventional dealership model and want to drive the car they are going to buy before laying down a fat stack of cash (or credit) for the car. There were maybe 12 cars total that we could see on the lot, including in the showroom, the front lot, and rear service area. There may have been a garage-full (of Model Xs?? hah!) that my prying eyes weren’t privy to, but I wouldn’t bet on it. Walking into the showroom, I was warmly greeted and asked if I had any questions. Compared to my recent visit to a Lincoln dealer, where I had someone literally standing outside my door when I exited my Leaf, who then stalked me around the lot, this was a relief. I really dislike high-pressure sales and was thankful for the space that Tony gave me. We walked around the showroom and looked at the two Model Ss on display and the rolling chassis. It is a familiar display, with the same colors, layout, and talking point setups as exist in Tesla retail locations. Up against the back wall is a bit of retail space with Tesla merch for folks like me who can’t afford a Tesla but really, really want one… so we buy a Hot Wheels version and a shirt. The main service desk commands the center post up against the wall with the Design Studio space filling out the room. Overall, not too different than a normal dealership from a physical layout standpoint, but the way it is done changes the tone. The way it is laid out allows customers to poke around and ask questions about the frunk (where’s the engine?), the rolling chassis (where’s the gas tank?), the Supercharger (whaaaa?), and even the Design Studio (you mean you’re not going to charge me extra to get it exactly the way I want?).

In my opinion, the layout promotes healthy, customer-driven discussion while also engaging them in the key differences that Tesla brings to the table. Beyond that, customers who do want a more traditional, salesman-driven pitch can get that… being walked through the exterior of the car, the crazy touchscreen interface, charging, the rolling chassis and batteries, all the way back to the Design Studio. It makes sense to me and feels like a hybrid of an Apple store and a sexy car store. I’m not an Apple fanatic, but its stores are impressive in and of themselves, and Tesla has captured many of the key bits… I’ll even say, Tesla has pulled the elements of perfect design out, blended that together with its vision for auto, and boom, out of the easy-bake oven pops a Tesla dealership. And I have to say… I’m not upset about it. They are beautiful and they make me smile. About the Tesla dealership culture…. It is worth noting that I didn’t roll into the dealership by myself. I had my wife and 2 kids, which is extremely relevant in a dealership selling $70,000–130,000 cars. Normally, the attitude is stuffy. Everyone is paranoid about the kids and what they are going to touch (break), where they go, how they interact with the cars, etc. In the Tesla dealership, I was more concerned with them not doing damage to the car than the folks who were helping me. My kids are admittedly on the mellow side, but still ventured into the frunk, the trunk, played with the charging port incessantly (I learned it can be opened by pushing the front of it), and the touchscreen.

Beyond that, there is a waiting room between the showroom and the Service Center that was a great place for them to wind down. It was kitted out with mellow toys for the kids, snacks, coffee, and water. This area is not uncommon in dealerships, but it felt more welcoming here. Snacks and everything were just laid out, like we were guests at a party, not hidden away for only sales staff to pull out if they deemed it appropriate. It’s a minor difference but really helps round out the welcoming atmosphere at the dealership. Switching gears and getting pressure from my better half to move this Tesla thing along, I inquired about the test drive that was offered almost immediately upon entry. We proceeded out to a silver Model S 70D fitted with all the latest improvements, where I was told that if I wanted to try autopilot, I would have to let one of my Tesla friends take me out to show me how it worked. I was happy to have an opportunity to watch and capture some video of it (below) so I naturally obliged. We did a quick circuit during which I was naturally impressed by the tech and felt like I was in one of the many videos I’d seen with the guy driving awkwardly sitting back, not touching the wheel (though his hands were at the ready in the event of any autopilot confusion).

After returning, I eagerly hopped in and after a quick scan of my drivers license, headed out onto the road with just my family. Take 30 minutes or an hour… grab lunch or whatever and come back when you’re ready. Umm… okay! When in a new car, I like to try it out, play with the acceleration limits, throttle response (do we still call it that?), braking, etc… but this time, I had a special goal: autopilot. I wanted to see what it did, when it was available, and how it responded.

After just a few short blocks, we were heading along a straight congested section of city street and I saw the two grey circles show up. Autopilot basically has two stages — the first is adaptive cruise control, which is accessible when a grey circle (speedometer) shows up to the upper left of the central display area. Adaptive cruise control allows you to set a speed and it keeps you at that speed… but also slows down and speeds up based on traffic. You can set the number of car lengths you are comfortable with and the car adjusts accordingly. But you still get to/have to steer like normal. No worries.

Stage 2 autopilot is accessible when the second grey circle shows up in the upper right corner of the central display. When enabled, the car takes the wheel and steers for you based on what it “sees” on the road — primarily looking for road markings, clear edges of roads like curbs or dropoffs, and cars. The software uses more conventional GPS positioning and typical nav maps rolled together with input from onboard radar, ultrasonics, cameras, and most importantly — fleet learning from the always connected Tesla servers. This unique combination of not just one technology… but a full suite of sensors, onboard data, and cloud data sourced from other Tesla drivers, results in the most accurate consumer-available autopilot suite out there.

A few of the few cars on the lot. I drove the silver one FWIW | Image Credit: Kyle Field

Back to the test drive, I flipped the autopilot on at every opportunity and was extremely impressed. Not a general, “I’m impressed,” but specifically, I was impressed by how available it was. I was able to use it on city streets at 30 mph, on the freeway at any speed, with any number of cars around, no matter how curvy the road. It wanted to play and to help… and I obliged.

I do have to mention that I was surprised to experience the “autopilot exited the freeway for me” phenomenon (when I didn’t want it to), which I was not expecting. I had my hands close, so it wasn’t an issue, but I figured that the car or the cloud would have already learned what was an exit or not, given the relatively high density of Teslas in the area. The only thing I could imagine is that maybe the car needs to learn a bit on its own first…? You can hear in the video below that, “This is the very first time this car has used autopilot,” which may or may not factor in.

I was impressed by how strangely comfortable it was to use. It was as easy as turning on cruise control… and worked with the same fluidity. I was fairly quickly put at ease by it, and after experiencing it, I can understand how drivers would similarly ease into an autonomous vehicle without a second thought after giving it a go at the dealership.

The performance of the Model S always blows me away, and I was “only” driving a 70D. Not a performance version (P) or a Ludicrous model… none of that. And it still blew my socks off. My constant accelerating and decelerating was not received well by my better half, but the kids loved it (as did I). It is truly something to be experienced, and I enjoy it every time. This is especially relevant considering that the Model S weighs around 5000 lbs and is the size of a small boat, but the sheer power and the way it’s tuned makes it feel like a lithe sports car… dashing around the road, faster slower, right and left. It’s a thing of beauty.

I can’t wait until the details of my Certified Pre Owned purchase are finalized. It’s going to be a rough transition from a Leaf to a Model S… but I think I’ll manage. 🙂

Appreciate CleanTechnica’s originality and cleantech news coverage? Consider becoming a CleanTechnica Member, Supporter, Technician, or Ambassador — or a patron on Patreon. Don't want to miss a cleantech story? Sign up for daily news updates from CleanTechnica on email. Or follow us on Google News! Have a tip for CleanTechnica, want to advertise, or want to suggest a guest for our CleanTech Talk podcast? Contact us here.
In this article:autopilot, dealerships, Rolling Chassis, Santa Barbara, Tesla, Tesla autopilot, Tesla Chassis, Tesla Model S, Tesla Santa Barbara, tesla superchargers