Renewable energy continues to dominate new power plant capacity and distributed generation has contributed an increasingly large share. In recognition of this, the federal Energy Information Administration is finally going to report estimates of distributed solar power capacity in its monthly updates, a big victory for tracking an individually-small but collectively-large power resource!

It’s been nearly 10 years since fossil fuel power plants represented more than 60% of new power plant capacity (2006), and it looks like three years running where distributed solar will represent at least 10% of new power capacity. Below is the annual data since 2003. The growth of distributed solar varies more widely by quarter, but has been consistently 10% or more of new power plant capacity. 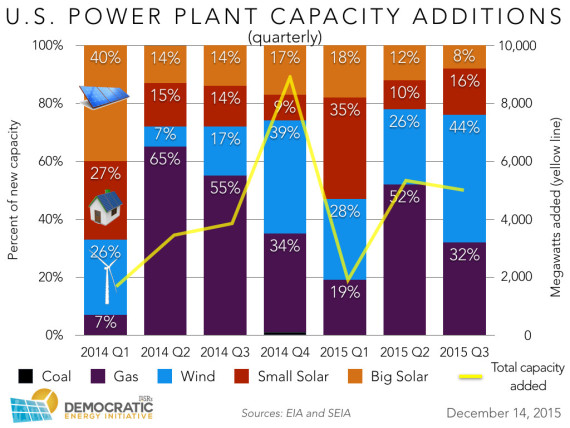 The growth in distributed solar continues to expand the opportunity for electric customers to own a slice of their energy future, an economic windfall that could cumulatively shift as much as $48 billion from electric utilities to their customers in the next 10 years.