I recently attended the 2015 Aspen-Institute Clean Energy Innovation Forum, an impressive gathering of about 70 of these forward-looking folks, including technology companies like Google, utilities like NRG, and representatives from the White House and Department of Energy. From three days of actively moderated discussion, here are my five big takeaways:

1. Innovation (and leadership) is coming from everywhere. Remember when we thought we needed top-down leadership to transition our energy infrastructure or address the climate crisis? Well, it’s not just about presidents and prime ministers anymore. Right now, startups, CEOs, governors, and mayors are driving change from the bottom-up – like the 13 companies who pledged $140 billion in low-carbon investments leading up to President Obama’s trip to Paris. Keep an eye out for: a wave of bottom-up pledges driving impact in the upcoming Paris climate talks.

“Right now, startups, CEOs, governors, and mayors are driving change from the bottom-up.”

2. Be prepared to lead or be left behind. As the pace of change accelerates, the markets reward and punish harshly. While sometimes “incumbents versus insurgents” is a good way to frame a changing market, in this sector it is actually more complicated. “Insurgents” are really just those that set the pace – they can be (and are) existing players like utilities, if those utilities are able to change and stay on the wave – to use a surfing analogy. Or, as Jack Welch once said, “if the rate of change on the outside exceeds the rate of change on the inside, the end is near.”

3. Tech will always lead politics. Policymakers observed that “politicians meet people where they are; technologists meet people where they are going.” That sums up the tension between policy and technology, especially on the federal level. As we work with Energy Excelerator companies to scale up (like the 5 profiled here), we also work hand in hand with Hawaii policymakers to develop regulations and rate structures that keep pace. But, startups know that policy will be a step behind them – and that they need to strategize accordingly. Keep an eye out for: states and cities seizing the opportunity to attract local tech talent by trying to close the gap between tech and policy (like San Jose’s transportation test-bed, New York’s Reforming Energy Vision (REV), and Hawaii’s 100% RPS).

4. Watch out for boomerangs. If you put up barriers to slow technology, it might just come back…harder. This has been happening in Hawaii (and other places) with solar; as the utility rolled out new limits, rate structures, and even a temporary moratorium in 2013, solar boomeranged back with renewed political and popular support. (The latest from our test bed can be found on our blog.) Be on the look out for boomerangs. As we like to say in Hawaii, “If can, can. If no can, still can.”

“Startups know that policy will be a step behind them, and that they need to strategize accordingly.”

5.Transformation is happening right now – be prepared to be surprised. Remember when we thought energy demand would continue to rise? Surprise! Big gains in solar and efficiency turned that trend upside down. Remember when we thought renewables were a fringe movement? Surprise! The current market cap of the four biggest coal companies is $800 million. The market cap of the four largest solar companies is $25 billion. These new paradigms would have been unthinkable just a few years ago. As one executive prophesied, “We’re about 40 years into a 100-year transition to clean energy.”

But, as you look toward the next 60 years, keep an eye out for this twist: the 100-year transformation is not linear… change is now accelerating.

From the slopes of Aspen to the shores of Hawaii: we’re in for some big waves in energy innovation, so it’s time to get out of the water or learn to surf! 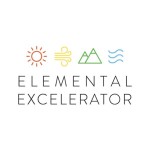