Some of the factors contributing to the relatively fast adoption of electric vehicles (EV) in some American metropolitan markets have been identified and characterized by a new study from the International Council on Clean Transportation (ICCT).

The dominant ones, according to the new report, are: stronger consumer incentives, a broader range of offerings, stronger promotional activities, and a more developed charging infrastructure. The new findings are the result of an analysis of actions taken by various state + local governments and utility companies to spur EV adoption in the 25 most populous American metropolitan areas. These 25 areas represent roughly 42% of the total population, 67% of new EV registrations, 46% of vehicle sales, and 53% of the total EV charging infrastructure in the country. The report also analyzes the various benefits to end users of EVs in specific cities — as well as aiming to differentiate the causes of market uptake in different cities.

The 25 cities in question altogether possessed an average of 1.1% of total vehicle sales being electric — roughly 40% higher than the nationwide average. The 7 top cities — San Diego, Seattle, Portland, LA, Riverside, San Francisco, and Atlanta — have an EV uptake between 2 and 7 times higher than the countrywide average. 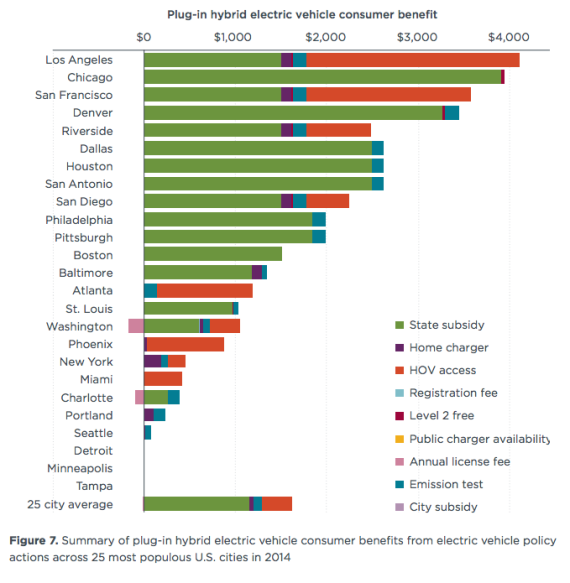 The 4 primary conclusions of the study are that: 1) policy is actively driving EV adoption in many cities (manufacturers are specifically targeting these cities); 2) different cities have used different approaches to boosting sales (all of which seem to have been effective to some degree); 3) best practices are beginning to emerge, it seems (which appear to support the “ecosystem approach”); and 4) cities are the focal points of cooperation between the various actors (auto manufacturers, governments, utility companies, businesses, and EV advocates).

“The roles of automaker marketing efforts, dealer actions, and utility action to promote electric vehicles seem clearly important and deserve greater study. Cases like Atlanta, where there has been success that is built almost exclusively upon one particular model (ie, the Nissan LEAF), point to the need for further analysis of the underlying causes. Also, smaller and mid-sized cities that are outside this study’s scope are innovating with electric-drive policies and have greater electric vehicle shares; these cities could be an important source of further lessons.”

To learn more, check out the full report.