Almost 75% of residential energy consumption in the US is related to water heating, space heating, and space cooling. According to the Solar Energy Industries Association (SEIA), 115 million homes consume $266 billion of energy annually, which is roughly the same as sending 10 million Americans to college every year. Likewise, 4.8 million commercial buildings consume $107.9 billion of energy annually, of which approximately 47% is related to heating and cooling.

With so much energy consumption in the US directly attributed to the heating and cooling of air and water, solar heating and cooling can play an important role in providing economically viable and environmentally sustainable solutions for supplying these essential needs. 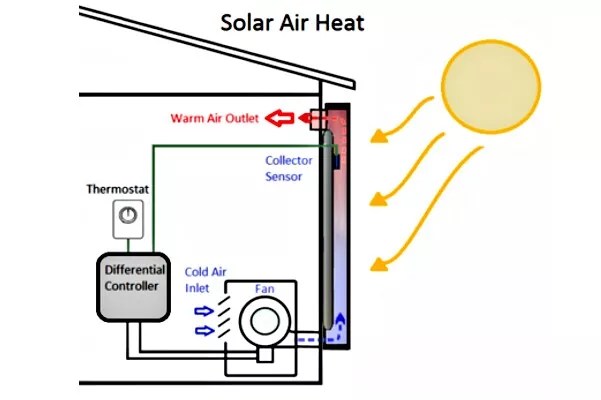 Solar heating and cooling can also play an important role in mitigating the impact of global warming. A single-family home with a solar water heating system installed will reduce its CO2 footprint by an average of 28%, according to the Solar Energy Industries Association (SEIA). With a combination solar air + water heating system, this reduction in CO2 can easily exceed 60%. Likewise, businesses and manufacturing plants with high makeup air volumes will achieve similar CO2 reductions with the installation of solar heating and cooling systems.

The Rising Adoption of Solar Heating and Cooling

Solar Heating and Cooling – The Basics

Measurements of thermal energy are often expressed in British Thermal Units (BTUs), which represent the amount of energy needed to raise the temperature of one pound of water by one degree Fahrenheit. BTUs, or “therms,” are easily converted into kilowatt-hours (kWhs).

The following is a basic explanation of today’s solar heating and cooling technologies, from “Solar Heating & Cooling: Energy for a Secure Future”:

Meeting the energy needs to heat water for the average American home can be achieved with only one or two solar heat collectors, which require around 60 square feet (ft2) of roof space. However, more northerly states with significantly colder weather than average temps may need a larger number of solar collectors, roughly requiring up to 400 ft2.

There are several types of solar collectors, including flat plate, evacuated tube, Integral Collector Storage (ICS), thermosiphon, and concentrating. Flat plate collectors are the most common type of collector in the US. Flat plate collectors have copper pipes attached to an absorber plate contained in an insulated box that is covered with a tempered glass or polymer coverplate. 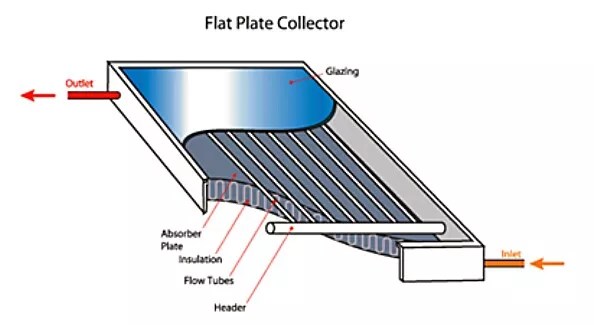 Evacuated tube collectors consist of rows of parallel, transparent glass tubes that have been “evacuated” of air, creating a highly efficient heat insulator for the fluid that runs inside the length of the tube. Evacuated tube systems are generally used when higher temperatures or higher volumes of water are needed, as well as for process heating and solar air conditioning systems.

While most solar collectors are commonly used for water and space heating at temps up to 200°F, concentrating collectors are useful in industrial and manufacturing processes because they can produce heat in excess of 300°F–400°F.

Solar heating systems are very effective at capturing the sun’s energy. With today’s technology, SEIA reports that solar heating systems “typically produce 45 kWhth to 102 kWhth per square foot of installed collector area per year (or 1.5 to 3.5 therms/ft2 in equivalent heat units), which is up to 80% of all the available solar energy hitting the surface of the collector.”

Solar air heating systems typically use a non-toxic liquid, water, or air to transfer heat from the solar collector. Heating water or an antifreeze solution, liquid-based systems circulate the heated liquid through a heat exchanger connected to a storage tank. Air-based systems heat air in a solar air collector and then fans distribute the heated air, circulating it around the home or property as needed for space heating. Energy storage technologies may also be employed with solar heating systems to provide heat when there’s no sunshine, and at night. Energy storage may also be used with solar cooling and solar water heating applications.

Solar cooling applications are very useful, as air conditioning represents a major strain on the electrical grid when weather is very hot outside. Using this same heat and strong sunshine to produce solar air conditioning is an ideal solution to reduce this strain. Also referred to as solar-assisted cooling, properly sized residential solar cooling systems may also be used for space heating during winter months.

Absorption chiller systems and desiccant systems are the two types of solar cooling systems. The most common of the two is absorption chiller systems, which use solar water heating collectors and a thermal-chemical absorption process to generate air-conditioning, with no electricity used in the process. The process is very similar to a refrigerator, except that a compressor is not employed in solar cooling. Instead, heated liquid from the solar collector drives the absorption cycle.

The second type of solar cooling system is a desiccant system. Air is cooled by passing over a common desiccant such as silica gel which draws out the humidity from the air, making it feel more comfortable. Solar heat is used to dry out the desiccant, regenerating it for reuse. 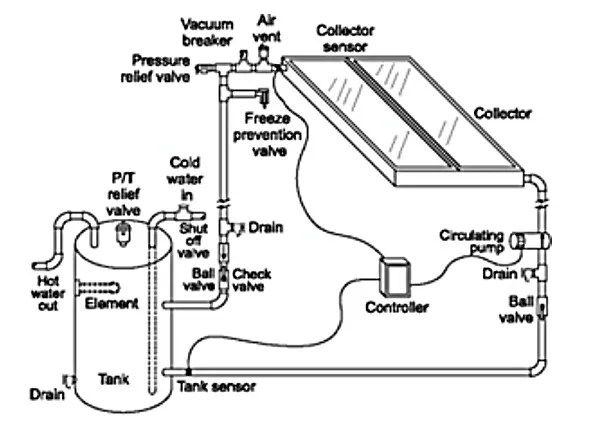 In either case, a properly designed and installed solar water heating system can provide up to 80% of a home or building’s hot water needs.

The widest use of solar heating technology in the US today is solar swimming pool heating. According to SEIA, over 30,000 solar pool heating systems are installed every year. Because of the ease of installation and rapid payback period, nationwide acceptance of solar pool heating in the residential sector has been consistently high over the past 35 years.

SEIA also notes that businesses such as hotels, resorts, apartment complexes, health clubs, and schools are excellent venues for solar pool heating. With over 186,000 heated commercial pools in the country, more than 60% are indoors and require heating year-round. Outdoor commercial pools are often heated continuously, as well. As noted by SEIA, “The amount of energy required to heat a competition-sized outdoor pool located in a warm climate such as California is equivalent to the annual natural gas consumption of approximately 150 single-family homes, so significant energy savings can be achieved in this area.”

Depending on the climate and whether the pool is located indoors or outdoors, the solar pool heating system will require the appropriate solar collector. Heated water then flows from the solar collector through the swimming pool’s filtration system to transfer the heated water into the pool.

The Economics of Solar Heating and Cooling

Residential solar water heating systems typically range between $6,000–$10,000, according to SEIA, depending on system type and geographic location. This cost is significantly reduced by the Federal Investment Tax Credit (ITC) and various local, state, and utility incentive programs. The out-of-pocket price of installed systems is typically $3,000–$5,000 with these incentives, and the payback period is typically in the 4–8 year range.

Typical commercial applications include space heating, cooling, and water heating. Building types that are particularly well-suited for these solar applications, according to SEIA, include “military facilities, manufacturing plants, large multi-family residential buildings and affordable housing, municipal facilities, hotels, elderly and student housing, hospitals, sport centers, and agricultural operations.” Commercial and industrial systems generally range between $20,000–$1,000,000, depending on size and the heating or cooling load. Depending on application, location, and financial incentives, the payback period for commercial systems can be likewise as low as 4–8 years.

SEIA notes that capital expenditures (CAPEX) for solar heating and cooling systems are often higher than conventional fuel systems, but on the other hand, operational expenses (OPEX) are much lower because the fuel is generated and supplied for free. Budgeting fuel expenses becomes a thing of the past, lowering OPEX significantly with the transition to clean, renewable solar heating and cooling technologies.

“Solar Heating & Cooling: Energy for a Secure Future,” developed by SEIA-member companies and BEAM Engineering, lays the groundwork for achieving this 8% by driving installed solar heating and cooling capacity from today’s 9 GW thermal to 300 GW thermal by 2050. SEIA predicts this would bring more than 50,000 good-paying American jobs and an estimated $61 billion in annual energy savings for homeowners, businesses, schools, and governments.

Picture credit: The largest Solar Water Heating System in the US, at Prestage Foods in NC – produces 10,000 gals of hot water a day for turkey processing. From Prestage Foods via SEIA.org

After digging into an old spreadsheet to create a new report on top solar power states per capita, it crossed my mind to compare...