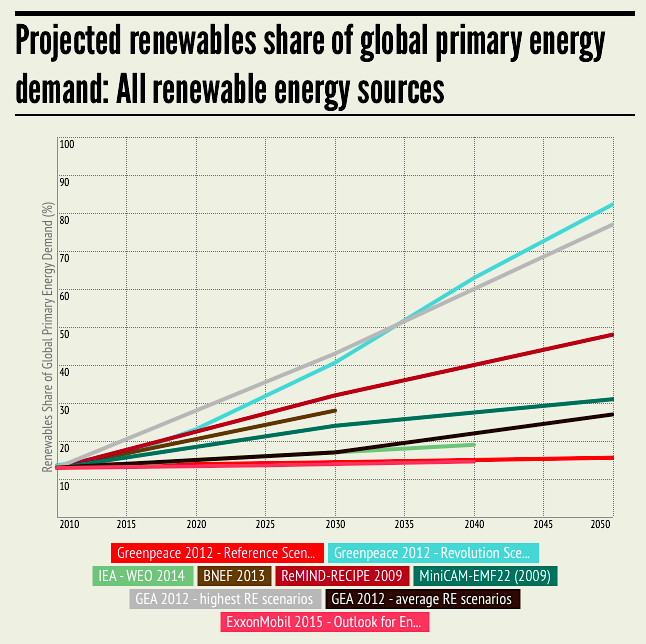 Over the past 15 years, many organizations have offered national and global predictions about the future of renewable energy. We’ve seen renewable forecasts from all of these groups:

All have posted increasing numbers on the issue. However, almost all of their predictions have underestimated the actual growth that wind and solar power have experienced so far. To the surprise of many official participants, the forecasts from Greenpeace, via Meister Consultants Group, Inc., international sustainability analysts and strategy planners, have proven to be the most reliable of all. The wind numbers tell a pretty impressive story. They summarize five forecasts. Two come from the International Energy Agency’s World Energy Outlook, widely recognized as the premier authority, claimed by the organization to be “the world’s most authoritative source of energy market analysis and projections,” and used by public and private sectors for policymaking, planning, and investment decisions. The Global Wind Energy Council, which speaks for the entire wind energy sector of over 1,500 companies and other organizations in 70+ countries, prepared one of the others. Greenpeace made the other two predictions. Its 2010 Energy Revolution scenario for cumulative installed wind capacity almost exactly parallels the actual growth curve (red line). The results for solar PV are even more dramatic, in terms of the future of renewables. This time, findings of two IEA-WEO studies are matched against two predictions from Greenpeace. Both IEA forecasts ended up being far too low, with the 2010 numbers more accurate thanks partly to new policy being implemented. Again, the Greenpeace 2010 Energy Revolution forecast comes out most realistic. In this case, though, actual statistics proved higher, nearly doubling the optimistic Greenpeace formulation.

Doubt about the aggressive Greenpeace Energy Revolution projections sprang from the organization predicating its forecasts on substantial structural, policy, and business changes. A nongovernment environmental organization coordinated from Amsterdam, Greenpeace may be the most visible environmental organization in the world. A group of Canadian and US citizens started the group informally around 1970 to protest nuclear weapons testing in an area of Alaska that had recently experienced a severe earthquake. It officially went international in 1979.

Over the years, many high-profile, often dramatic campaigns by Greenpeace activists (the group’s whaling protests, for example) have brought success, but others have backfired, sometimes spectacularly, as with December’s in-your-face and currently litigated disturbance at the revered Nazca Lines in Peru. However, from a sometimes spotty and disorganized early reputation, Greenpeace has emerged as a trustworthy supplier of very useful information about worldwide environmental trends, as this latest news demonstrates well.

The new report also includes individual statistics and forecasts for each technology in North America, the European Union, and China. Finally, consider a slew of current predictions for renewables in total. All encompass growth, but, again, the Greenpeace numbers (2012) exceed all the others at 2050, with the high-end 2012 International Institute for Applied Systems Analysis GEA scenario closely paralleling them. The Meister organization makes the case that on precedent, Greenpeace’s numbers may prove to be the most accurate for planning purposes. And as The Guardian has pointed out, recent moves by E.ON, China, and other local and global institutions suggest that the changes on which Greenpeace pinned its estimates are already underway.