In perhaps a little over a year Nautilus Minerals will begin mining operations in the deep ocean off Papa New Guinea. New tools, ships and techniques are anticipated to yield copper, gold and silver.

Notwithstanding many recent articles about mining asteroids, I uncharacteristically avoided the subject, at least initially. Instead, I thought back to something that was said at the recent Boston Wind Power Conference: that offshore wind would test the environment and regulations in a largely unexplored undersea frontier. One of those operations, deepwater mining operations is set to begin in just over a year.

Mining operations can conjure images of people risking their lives in man-made caves or stripping the skin from the living planet in a plume of pollution and disregard for the environment. But mining, like farming and gathering energy, is a basic operation upon which our material existence is based. It is so fundamental that writers like John Peterson (of Seeking Alpha) and to a lessor extent Tom Murphy (in his blog called “Do the Math”) have started some well-considered logic based upon assumptions about the limited minerals we are pulling from the Earth today.

Any important metal in limited supply is “precious.” But stop. Those assumptions are based upon the 3/10 of the Earth’s surface that is “on land.” What if, with a new technology, or an adaptation of an existing technology, we can not only explore but begin to gather the resources from 70% of the Earth covered by water. Could such an operation compete with mining asteroids?

The race is on and building the specialized equipment for undersea mining has already begun. Nautilus Mining (Nus.To OTCQX: NUSMF; TSX: NUS) is adapting equipment and techniques developed in the oil and gas industry to mining operations more than 1600 meters beneath the waves in Papa New Guinea (PNG). These pieces of equipment will operate where ocean pressure will be more than one and a half tons per square inch. It is an immense task to build the machine for these depths, even before considering what is happening with the human operator.

There are three primary types of electric-powered seafloor production tools that will be used in the operations. These “tools” are a bit more than a hand-held hammer, with the largest weighing over 275 tons. (Look for the person in the illustrations.) Similar machinery has been used in the oil and gas industry, but here there are adaptations with specialized cutting heads. Think of the dentist who keeps switching drills depending upon the nature of the work: 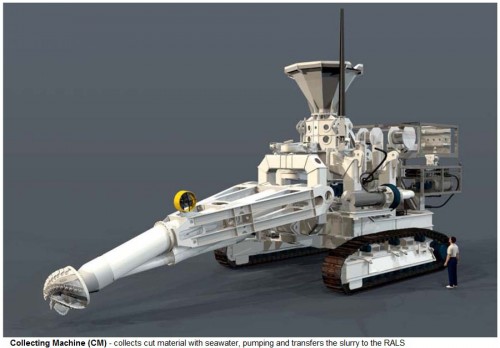 It is the operators’s control which needs to be on site, not the person. Putting a driver in these machines is not a matter of personal risk but electronics. They will sit comfortably in air-conditioned offices on the support ship and run the equipment remotely. The Production Support Vessel (PSV) can hover over the site, providing control and power for long periods of time. 30 MW of conventionally generated power is anticipated. The ship is presently being constructed and will be delivered in the first quarter of 2013.

Nautilus Minerals has tenancy over many sites in the area. Once mining operations are no longer practical in one place, the machinery can be recovered and the ship will move the entire operation to another site. This lowers the capital expenditures and allows much smaller sites to be mined than would be economical on land.

Deposits of metalliferous mud and sulfides are formed at, or adjacent to, the vent site when the rising hot hydrothermal fluids mix with the cold ambient seawater on the sea floor. …Volcanic-hosted massive sulfide (VHMS) deposits form a major part of the world’s reserves of copper, lead and zinc, as well as being producers of gold and silver… …The first active ‘black smoker’ chimneys (and associated SMS deposits) were discovered in 1977 around the Galápagos Islands by the National Oceanic and Atmospheric Administration. … In 1997, the PNG Government granted Nautilus Minerals the first two exploration licences for SMS deposits, covering the Solwara 1, 2, 3 and 4 areas, in the Bismarck Sea.

VHMS deposits on land commonly form in clusters. This is likely to be similar for SMS deposits; however, many small (.5 Mt) SMS deposits could be mined by moving floating infrastructure, whereas on land VHMS deposits of this size may individually be too small to justify development.

While essentially an undersea, strip-mining operation is anticipated, Duke University’s Cindy Lee Van Dover, a marine biologist who has explored life around hydrothermal vents, has visited sites with Nautilus Minerals where she has been an advisor on conservation techniques. She speaks of the undersea world as the new “Wild West,” a new area of discovery. It is presently anticipated that the tiny forms of life found on the sea floor at this depth will repopulate an area within 2 to 3 years. Nautilus seems to be taking a conservative and careful approach. They will be watching the results of their operations and making the needed adjustments.

A History of Research and New Regulations

Undersea mining has been researched and studied for many years. Previously, “… Activities stopped due to a combination of low metal prices, critical gaps in technology, and the lack of a secure mining tenure system.” The discovery of hydrothermal vents and the associated mineral deposits provides a rich source of minerals that are economical to recover. Adaptation of new equipment from the oil and gas industry has filled the technology gap. The International Seabed Authority “…became fully operational as an autonomous international organization in June 1996.” An exclusive claim to mine resources found on the bottom of international waters is now possible.

The Future Is Within Our Grasp

Presently, the power for the operations will be provided by conventional means, but we can anticipate a time when floating wind turbines or OTEC may be moved to a site and provide power for the operation. This may cut power costs and be another adaptation to independent sea-based solutions. Pre-processing the ore will presently take place on land, but the operation will eventually be moved to another specialized ship. The same concentration and refining technology used to process the minerals may someday be applied to geothermal power plants to recover minerals that would concurrently reduce the mineral buildup in associated wells. Licensing the technology may give an extra revenue stream.

We look to the skies and are inspired to consider the free and easy. Mining asteroids captures our imagination, but reports tell us that it may be more than 10 years before the “how” might be more fully considered. Undersea mining is a practical plan that should be a reality in a little more than a year. With competition from undersea mining, it may be even longer before mining minerals from heaven gets off the ground. My bet would be on Nautilus minerals. It is a down-to-Earth solution.

Photo Credit: All illustrations are the copyright of Nautilus Minerals and are reproduced with permission.