A team of researchers at the University of California, Davis has developed solar energy’s Next Big Thing: nanoscale silver filaments grown in a treelike pattern. Just as a tree’s leaves collect sunlight over a broad surface area relative to their trunks, the filaments of silver nano-trees would be able to collect solar energy over a broad surface area relative to their supporting structure. Though the grant supporting the research is only a modest $100,000, it could lead to a new low-cost method for fabricating highly efficient solar cells.

The new research was inspired by the “fractal” growth pattern of trees. Fractal patterns repeat in form while changing scale, as a tree trunk branches out into limbs, smaller branches, and finally into leaves.  In terms of solar collection efficiency, the result of the ever-diminishing scale is an ever-increasing area exposed to sunlight.

The new fractal trees consist of silver branches 1/50th the width of a human hair, which can be grown through an electrochemical process involving silver nitrate layered onto a tin oxide film modified or “doped” with fluorine. Through this process, the original branch splits into smaller branches. When the tree is ready, it gets a light-absorbing plastic coating that transmits a charge from solar energy to the underlying silver.

Aside from the potential for greater efficiency, the fabrication method (which depends primarily on a chemical reaction rather than mechanical processes) represents a broad approach to lowering the cost of solar energy. Other factors are the cost of materials, the installation process, and the permitting process, all of which are being tackled under President Obama’s SunShot Initiative.

Biomimicking our way to a clean energy future

The UC Davis team is by no means the only one to use trees as a jumping-off point for developing new clean energy technology, though the fabrication method appears unique. Researchers at Stanford University are working on a…

treelike structure to capture atmospheric carbon and convert it to fuel, and Daniel Nocera’s team at MIT has been making waves with a “solar leaf” the size of a playing card.

Some rights reserved by casschin.

Have a tip for CleanTechnica, want to advertise, or want to suggest a guest for our CleanTech Talk podcast? Contact us here.
In this article:high-efficiency solar, low-cost solar, obama sunshot, silver solar trees, solar leaf, solar trees, UC Davis solar 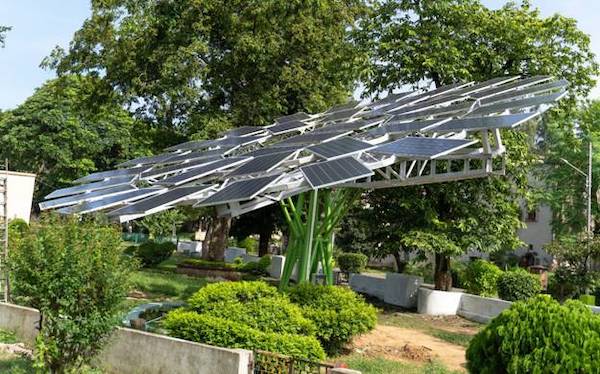 Everybody is talking about the world's largest solar tree because it fits right into the emerging solar-plus-agriculture movement.