It’s true—amazing solar tech innovations just keep coming. Some advances come in the form of new handheld devices and applications. Others promise to elevate solar into a mainstream energy source that may one day replace greenhouse-gas-emitting fossil fuels. Here are five recent innovations that have left both solar experts and newbies in a daze. One of the products that garnered a lot of interest at this year’s Consumer Electronics Show was a solar cover for Amazon’s Kindle e-reader, presented by Solar Focus. With just one full hour of sunlight, the SolarKindle collects enough energy to power your device for three days. What’s more, the cover is advertised as being able to provide power to the tablet for three continuous months under “normal” sunlight conditions. Take your Kindle outside with you, and it’ll stay charged for free (with zero fossil-derived energy). Winner.

Now, this is where things get really trippy. MIT researcher Daniel Nocera has developed what he calls an Artificial Leaf, a potentially groundbreaking energy storage technology that successfully mimics nature. In a photosynthesis-like process, the ‘leaf’ uses solar energy to split water into hydrogen and oxygen. The emitted gases could then be stored in a fuel cell, making off-grid living beyond feasible. Not only that, but Nocera says that his leaf’s efficiency outperforms nature by a factor of 10. He founded the company Sun Catalytix to work on products that may some day provide electricity to impoverished households in developing countries. Solutions are expected to be ready for commercial use in the next few years. (Note: while it’s called an ‘artificial leaf’, it’s not actually a leaf.)

Partly an electric-vehicle charging station, partly an LED street lamp, the “Lotus” is a solar kiosk-like structure in the shape of a giant lotus leaf. Italian architect Giancarlo Zema, known for his innovative designs for semi-submerged architecture, teamed up with architectural design house Luminexence to create the multi-faceted design. A modular product, a single small Lotus generates 500 watts of electricity. Larger “leaves” generate 2.8 kilowatts, and can be used as covered parking structures for multiple vehicles. The Lotus may find its way into parks as self-operating information kiosks. The architects ultimately envision a solar-powered “urban design shelter” that transforms public space as we know it. It’s hard not to include Dow’s new solar shingles in any list of up-and-coming solar innovation. If you haven’t heard of building integrated photovoltaics (BIPV), remember the term, because it promises to make solar blend seamlessly with its surroundings. What makes the thin-film solar shingles remarkable is that they double as your rooftop, providing a roofing replacement and solar installation at the same time (for far less cost). The shingles are applied like conventional asphalt shingles, and can be installed by roofing contractors without specialized knowledge in solar power. The Powerhouse shingles finally came to market in Colorado at the end of last year. They are expected to expand into California and other states this year. Along a high-speed rail line in Belgium, sit 16,000 solar panels atop two miles of man-made tunnel. The Solar Tunnel marks the first time in European history that a railway infrastructure has been used to generate clean power. That solar energy now operates the signaling, lighting, and heating systems for stations and junctions along the train’s route from Antwerp to Amsterdam, making the train, an already greener form of transportation, that much more self-sustainable. The panels, installed through a collaboration of municipalities, solar developer Enfinity, and installer Solar Power Systems, are expected to produce over 3,000 megawatt-hours of electricity each year. That’s enough to power 950 homes. Civic development at its finest. 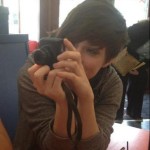 Brittany Mauriss is a UCLA grad with a passion for all things renewable energy. Her specialties are solar advancements, green gadgets and human-centric journalism. She also manages CalFinder Solar, an awesome free service that connects you with residential solar contractors, eco-focused kitchen remodel pros, and more. Follow her on Twitter @BrittanyMauriss.