Scientists with research group SRI International recently completed a successful wave power test in the Monterey Bay off the coast of Santa Cruz, CA. While the buoy-like device only generates enough electricity to power a refrigerator light bulb, the design is an improvement on its problem-prone predecessors.

The 10-foot-tall buoy has two levers that rise and fall with waves and generate electricity by flexing bendable slabs of rubber-like material. The generator currently produces 20 joules per second and the team is at least five years away from producing a larger commercial version of the device.

The generator will either conduct power to shore via underground cables or produce hydrogen that would run through a pipe, although researches remain uncertain as to which method is more efficient.

Experts estimate that wave power can supply up to 6.5 percent of our nation’s total energy needs. Because waves are a reliable form of energy that are close to the most highly populated areas that in turn require the most power, I would not be the least bit surprised to see a larger version of the electricity generating buoys off our coastlines in years to come.

It would also be interesting to see if the buoy generator could be coupled with deep water wind turbines that are already based on a floating foundation. 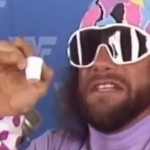