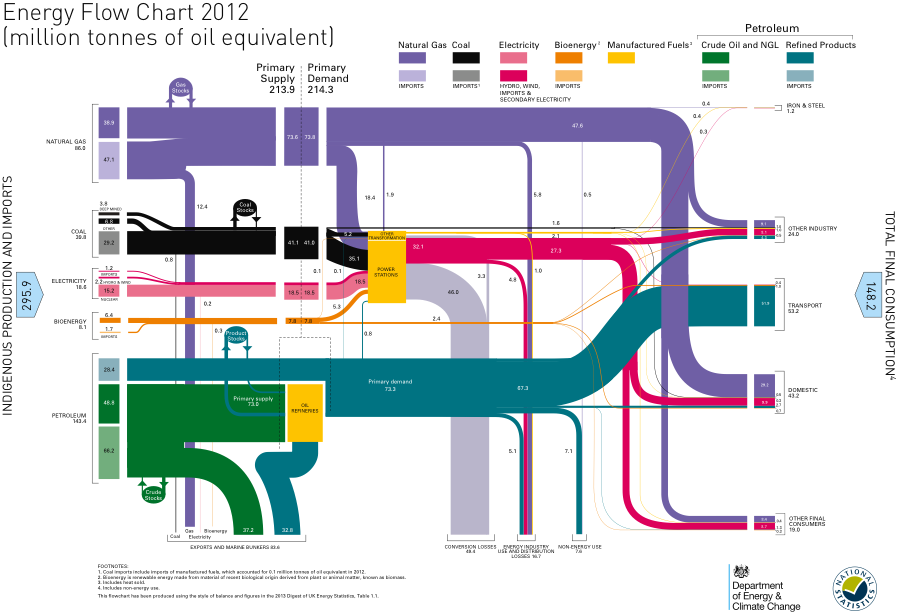 Last week, we called attention to America’s massive energy inefficiency problem. The amount of energy wasted by the US economy in 2012, we noted, could power the United Kingdom for 7 years.

But of course the United Kingdom is more than just a reference point. It’s an interesting energy case study itself. The UK is the European Union’s largest oil producer, the country’s renewable electricity use has quadrupled since 2000, and last year the UK was crowned the world’s most energy-efficient major economy. Not to mention its capital city is home to Opower’s European headquarters.

Given our company’s inclination to make insightful energy usage comparisons, we’d love to be able to present a side-by-side comparison of total energy waste in the US and UK. Unfortunately, each country takes a distinct methodological approach to evaluating economy-wide energy efficiency  – making it unfeasible to do a clean apples-to-apples comparison (see Author’s Note). But, based on our knowledge of the energy economy in the US and UK, and equipped with their recently published Energy Flowcharts for 2012, we can still draw some meaningful conclusions:

The first point above, regarding the sizable divergence in per-capita energy use between the US (313.9 million people) and the UK (63.2 million people), may be the juiciest tidbit of all. Why does the average American consume twice as much energy as the average Brit? The answer is multifaceted and complex, but we can begin to identify a few key drivers.

First, consider transportation — the largest energy end-use in both countries. The average fuel economy of UK cars is currently 65% better than US cars. Americans also drive almost twice as many miles per year than Brits. More gasoline per mile, combined with lots of miles, is the perfect recipe for a bloated energy flowchart.

Second, compare a typical home near London, England with one in New London, Connecticut. You’ll see some clear energy-related differences: the UK home will neither have an air-conditioner nor a swimming pool (both are exceedingly rare there, largely due to a milder climate); they’re also far more likely to be hang-drying their laundry. These kinds of factors add up.

Third, UK energy efficiency policies have become increasingly ambitious. Last November, the UK Government unveiled a national Energy Efficiency Strategy, that included a £39 million investment in research on how to empower consumers and businesses to adopt more energy-efficient behavior over time. And starting soon, the UK will join other European countries in a regional effort to reduce energy use by 20% by 2020.

While the US has also made strides in boosting energy efficiency in recent years, especially at the state level and through innovative utility programs, the UK’s concerted nationwide initiatives to cut energy use have positioned the country as a leader…as evidenced by its #1 ranking in ACEEE’s 2012 International Energy Efficiency Scorecard. And these efforts are borne out by the 2012 data: as shown below, the UK’s weather-adjusted primary energy consumption inched downward for its 7th straight year. For its part, the US has also seen a general downward trend in total and per-capita energy use in recent years, but it hasn’t trickled down quite as consistently as in the UK.

There are many interesting insights to be drawn from recent energy trends in the States and the Kingdom — including how the Super Bowl and the birth of little Prince George exerted a surprisingly similar effect on national energy use. To dive deeper into the data from both sides of the pond, check out the 2013 Digest of UK Energy Statistics and the most recent US Energy Flowchart Analysis from Lawrence Livermore National Laboratory.

Author’s note: The UK’s Energy Flow analysis is constructed on a “primary fuel input basis,” which differs slightly from the “useful energy basis” adopted by the US version. Interested readers can read more details about the UK’s flowchart calculations here and US calculations here.

Special thanks to Nate Kaufman and Ashley Sudney.