Lectron makes EV charging adapters and EVSE home chargers at affordable prices. These adapters provide cross compatibility between the US AC charging standard J1772 and Tesla’s AC chargers on the North American Charging Standard (NACS) as well as an adapter that allows Teslas to charge at CCS1 stations.

As electric vehicles move from early adopters into the majority, and public EV charging infrastructure struggles to catch up, adapters help bridge the gap in functionality and coverage for EV drivers. Lectron builds a range of alternatives to the higher priced offerings from OEMs like Tesla and others. They sent us a few of their most popular adapters for us to run through the paces and with a J1772 EV and a Tesla in the garage, we were able to put most of them to the test.

This adapter from Lectron offers Tesla owners the ability to charge at J1772 AC charging stations. This adapter comes with all Tesla vehicles, or at least it does today. With Tesla’s rampant pricing and product indecisiveness, it seems like it will only be a matter of time until Tesla decides to charge people for it. 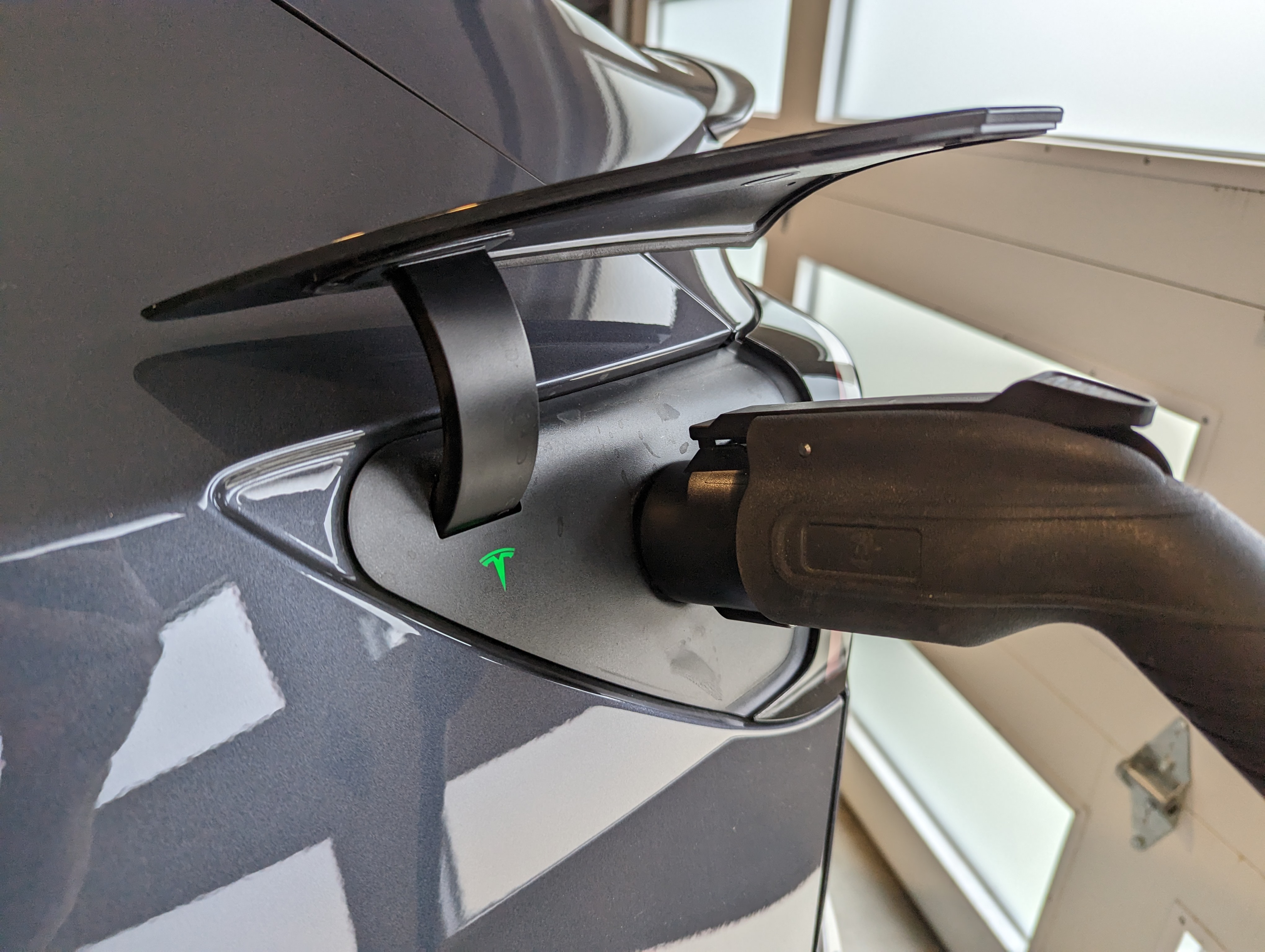 Comparing the official Tesla adapter and Lectron’s adapter side by side, the two are of comparable quality and would likely be indistinguishable if you didn’t know who made which one. In terms of functionality, it works flawlessly. Plug the adapter into the J1772 port on the charger and pop it into the car. The fit felt a bit more snug than just using the Tesla charger, but that could just be because it’s brand spanking new. After a few seconds for the vehicle and charger to chat, the car starts charging just like you’d expect.

Tesla just went through a round of major price reductions and as of this writing, the official adapter is $50 from Tesla. Lectron’s current pricing is $54.99, making it less attractive on financials alone. Tesla’s products do you regularly go out of stock so this could be a good fallback with a minimal pricing hit. I would be hard pressed to choose any aftermarket charger over the official adapter from Tesla, but it’s good to have options.

On the opposite end of the spectrum, Lectron built an adapter that allows non Tesla’s to use Tesla’s AC charging stations. It plugs in to a Tesla NACS charger on one end and into a car using the J1772 port. In the wild, Tesla’s AC chargers are typically called destination chargers and are common at hotels and other establishments across the United States as Tesla offered the hardware for free to host sites. Tesla currently has over 35,000 wall chargers installed in the wild and the network continues to expand.

The adapter is also a great option for homeowners with a Tesla and Tesla Wall Connector looking to switch to a non-Tesla EV. This simple adapter is plug and play. Just plug it into the Tesla charger and it latches on. From there, plug the J1772 end into the vehicle and charging starts. Easy peasy. In our test garage, we have a Tesla Gen3 Wall Connector and a Wallbox Pulsar Plus J1772 charger. Having the adapters from Lectron allows us to park on either side of the garage without having to run a pair of charging cords across the garage. The same flexibility applies to homeowners buying a Tesla with the official Tesla home charger who want the flexibility to buy a non-Tesla EV in the future without having to buy and install a new charger.

It is important to note a few things about this adapter before you head off into an assumed nirvana state. First, it does not work at Tesla’s Superchargers. Superchargers are DC and the J1772 outlet on this adapter is only for AC charging. Supercharging also requires communication between the charger and the vehicle for payment, so that’s a big no. Second, some of Tesla’s destination chargers are hard coded to only work with Tesla. This difference is not listed on any apps, so it’s a bit of a hit or miss as to whether it will work or not. It’s not the adapters fault, this restriction is setup in the destination charger itself.

Tesla recently enabled the use of CCS1 chargers with their vehicles via a $250 adapter. Lectron offers their own version of this adapter for 50 bucks less. Lectron’s adapter is a great, lower cost way to add the capability to charge at popular DC fast charging networks like EVgo, Electrify America, blink and Chargepoint in the US. Of course, that only applies while they’re up and running, but it’s always great to have more options. This is especially true on road trips across the country. Where the ability to use public CCS fast chargers can make the difference between being able to drive a route or not.

In some areas, CcS fast charging station might be more convenient than the local Tesla supercharger. In these cases it’s also nice to have the adapter. The public DC fast charging network is growing and fits and starts and a safety net like an adapter for a different network is nice to have, especially when it’s only $189.99 compared to $250 for Tesla’s adapter at the time of this writing.

In our testing, the heavy weight of some CCS1 charging cables, like those at Electrify America stations, can put a ton of force on the adapter and the Tesla charging outlet on the vehicle. This can not only make it difficult to get a solid connection on the first try — it took us three attempts to start a successful charging session — but it can result in premature failure of the adapter and/or the charging outlet on your vehicle. This is not an issue so much with this adapter as the charging stations, but it’s worth thinking about ahead of time.

Perhaps the most interesting adapter in Lectron’s quiver is the Ioniq 5 power out adapter. We didn’t get a chance to test this adapter as we don’t have an Ioniq 5 in the test fleet yet but this simple adapter allows ionic 5 owners to transform their AC charging port into a 15A AC outlet. It only has 5 reviews on Amazon so far, but all are positive, which is a great start.

Because of its unique functionality, adapter is only compatible with the Ioniq 5. It’s about the same size as the Tesla to j1772 adapter and should fit in a glove box or center console without an issue. It easy to stash this adapter until a moment if need without taking up a ton of space.

The AC outlet is capable of pushing out up to 15 amps and enables a host of uses including charging a laptop, cell phone, powering lights around camp, and the like. At $129.99 the adapter is not cheap, but it can be a clutch accessory for road trippers, camping aficionados, and folks who just like to have a spare power outlet just in case.

It’s really cool to see companies like Lectron popping up to identify and to fill the gaps with well-crafted products. Electric vehicles are still a relatively new addition to the transportation mix and the potential to use them in more places in more ways is still being explored.

Lectron has definitely put their stamp on the EV space and is pushing forward with unique innovations that sets them apart. We will definitely be keeping an eye on Lectron and their products moving forward as they continue to unlock new potential for EV drivers across the country and around the world.

For more information about Lectron and their products, check out their homepage or their Amazon shop.

Disclaimer: Lectron provided the adapters to the author free of charge for the purposes of this review.

Don't want to miss a cleantech story? Sign up for daily news updates from CleanTechnica on email. Or follow us on Google News! Have a tip for CleanTechnica, want to advertise, or want to suggest a guest for our CleanTech Talk podcast? Contact us here.
In this article:Electrify America, J1772, Lectron, Tesla