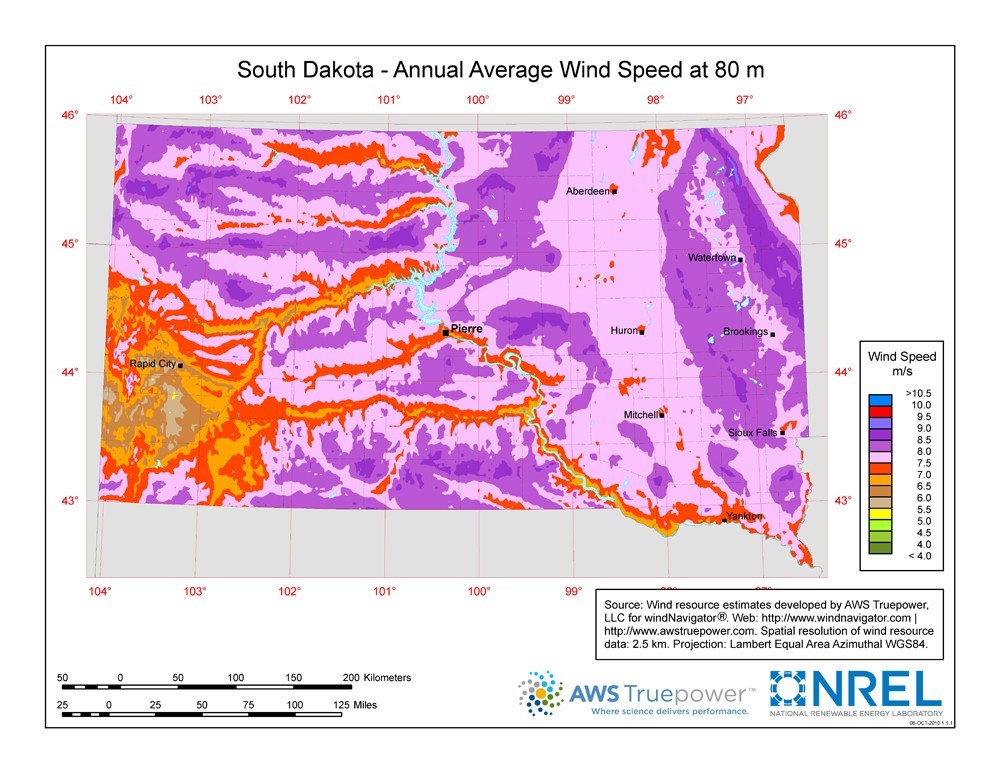 The political knives are still out when the topic turns to climate change, but it looks like the energy transition is going to happen anyways. A case in point is the “red” state of South Dakota, which has now amassed enough renewable energy to fulfill its own electricity needs, and then some.

South Dakota is no stranger to renewable energy. The state got its first hydropower facilities up and running in 1912, followed by another growth spurt in the 1950s.

Hydropower was the king of the renewable energy hill in South Dakota for the next 50 years or so. Wind turbines began to dot the landscape in the early 2000s, when developers caught on to the high-quality wind resources in the state. As a result, in 2011 South Dakota became the first state in the US to get more than 20% of its electricity from wind turbines.

That statistic comes from the latest US Energy Information Administration report, which also notes that South Dakota had 23 wind farms in operation by the beginning of this year, totaling 2,300 megawatts of capacity. The latest figure from the American Clean Power Association is even more impressive, topping 3,000 megawatts.

IEA has this to say about the surge in renewable energy development in South Dakota:

They kind of buried the lede there, but local reporters were quick to note that it was quite a feat to have another renewable energy resource overtake hydropower, especially considering the relatively short time frame.

That all sounds very exciting. However, South Dakota may have some ‘splaining to do, depending on your perspective.

Stanford professor Mark Z. Jacobson, for example, took a mixed message away from the IEA report:

“South Dakota produces enough (120%) of its electricity consumed in the annual average to offset 120% of the pollution and greenhouse gases and mining from fossils produced there or elsewhere that create 100% of South Dakota’s electricity.”

Nevertheless, South Dakota is not stopping at the 120% mark. Earlier this year, the state’s Public Service Commission took note of all the wind farms in operation and added this nugget:

“Other areas considered for wind energy development are the Coteau des Prairies in the northeast; Buffalo Ridge, which extends north-south from Marshall County to Brookings County; Turkey Ridge within Turner and Yankton counties; Fox Ridge near Faith; and several central South Dakota counties and tribal lands.”

If you have the inside scoop on those central South Dakota counties and tribal lands, drop us a note in the comment thread. We’ve spotted two possibilities so far. One is the 200-megawatt North Bend Wind Project under the wing of Engie. This will be the state’s third wind farm in South Dakota, so they must like what they see.

The other one is the 200-megawatt Sweetland wind farm. The developer is Scout Clean Energy, which has been undergoing a growth spurt after it became a portfolio company of the firm Quinbrook Infrastructure Partners in 2017.

Solar Energy, Not So Much

All this activity is a sharp contrast with the South Dakota solar industry, which has been shuffling around in circles over the past few years. State lawmakers can take part or all of the blame for failing to establish a firm legislative platform for solar power during the Obama administration.

A glimmer of hope finally appeared in 2020, when the German developer Wircon GmbH won a permit to construct the 110-megawatt Lookout Solar Park, to be built partly on private property within the Pine Ridge Reservation. As described by the US Department of Transportation, Lookout was supposed to be the first utility-scale solar array in the state, the first to need a Public Utilities Commission permit due to its size, and the first of its size to be built on tribal land.

“[The] Lookout Solar model could be potentially replicated in other locations near transmission lines for rural renewable energy projects,” DOT explained, taking note that access to existing transmission infrastructure was a key factor. DOT also noted  that a Tribal Employment Rights Ordinance would cover hiring for the project.

Lookout underwent an environmental review last year, so things could be moving along shortly and then we’ll see about that potential for replication.

The program carves $8 billion out of last year’s Bipartisan Infrastructure Law to establish half a dozen or so regional hydrogen production, storage, and transportation networks around the US. In past years, that would have meant increasing the use of natural gas to produce hydrogen. However, the law stipulates that only two of the hubs must include natural gas.

The other hubs can leverage renewable energy resources, including wind and water. That is why a powerful consortium of northeast Atlantic coast states is able to compete for one of the hubs, even though their fossil resources are slim to none.

South Dakota is in a similar position. The state is short on fossil resources and it imports natural gas from Texas and Canada, which leaves it in a weak position to establish a regional hydrogen hub for natural gas. Neighboring North Dakota has already hooked up with Wisconsin, Montana and Minnesota to compete for Energy Department funding, but that doesn’t necessarily mean South Dakota gets left out in the cold.

“All the elements of the circular economy come together in this one facility, farmers deliver sustainably grown corn feedstock, renewable wind power and renewable natural gas provide electricity and thermal energy for the facility, and high-value nutrition products, corn oil, and sustainable aviation fuel leave the gate,” Gevo explains. Gevo also notes that the plan includes green hydrogen, with wind turbines presumably providing the electricity for an electrolysis system that pushes hydrogen gas from water. Renewable hydrogen from biogas is also part of the plan.

Solar does not appear to be in the mix for this particular project, but another development in the green hydrogen area could help kickstart the state’s solar industry. Two university students at South Dakota Mines, Kirstie Gildemeister and Kelsey Fitzgerald, have developed an award-winning electrolysis system designed to leverage solar power, and they have already started a company to bring it to market.

Hydrolyst LLC and the product they have invented have the potential to greatly improve the effort to store and save energy generated by solar and wind power.

“The great thing is this system is scalable, it can be used for everything from a small farm to power a whole city,” says Fitzgerald, who is credited with creating the idea.

A prototype near Ellsworth Air Force Base is already under way, so stay tuned for more on that.

It’s also worth noting that part of South Dakota is included in the MISO electricity grid, where planners are working on a massive transmission line construction program aimed at shuffling more renewable energy around the Midwest.

Don't want to miss a cleantech story? Sign up for daily news updates from CleanTechnica on email. Or follow us on Google News! Have a tip for CleanTechnica, want to advertise, or want to suggest a guest for our CleanTech Talk podcast? Contact us here.
In this article:Clean Tech, ENGIE, Gevo, green hydrogen, Hydrogen, Hydrolyst, Lookout Solar Park, Renewable Energy, Scout Clean Energy, South Dakota, US Department of Energy (DOE), usa, Wircon GmbH