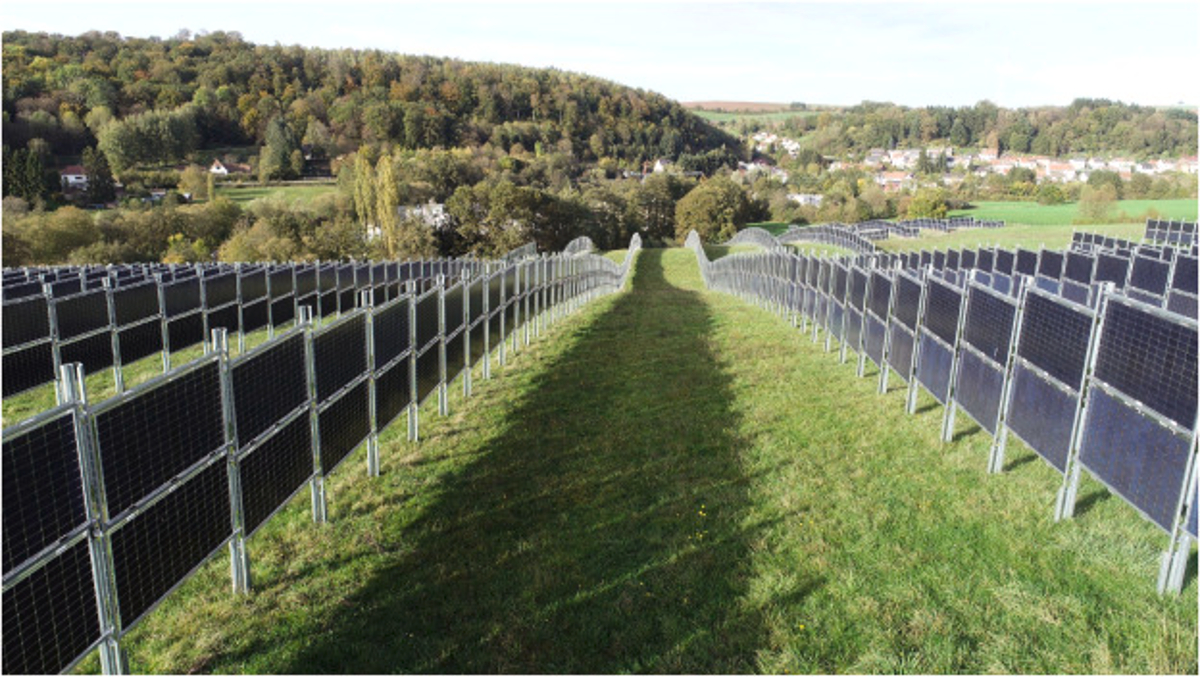 Researchers in Germany claim vertical solar panels may be better than horizontal solar panels. Typically, solar panels are mounted horizontally and oriented toward the south to get maximum exposure to the sun as it travels across the sky. Instead of lying flat, they are angled at between 20 and 35 degrees, depending on how far from the Equator they are located. There are complex mathematical formulas that tell solar farm developers the precise angle the panels should be mounted at in Pensacola, Peoria, or Penticton. There are tracking systems that can move the panels during the day to follow the sun, but they are expensive and need regular maintenance.

But what if conventional wisdom is wrong? Researchers at Leipzig University of Applied Sciences claim that mounting bifacial solar panels with one side facing east and the other facing west would produce more renewable electricity and reduce one of the side effects of traditional solar energy farms — an abundance of electricity at midday and not enough in the morning or afternoon. Their study was published in the August, 2022 edition of the journal Smart Energy.

Another advantage that flows from mounting solar panels vertically is it allows room between them for crops to grow without the need for tall mounting systems that allow farm machinery to operate underneath.

“Bifacial solar panels can use solar energy from both sides. Installed in an east-west orientation, most electricity is generated in the mornings and evenings. This would reduce the need for electricity storage and at the same time keep the space required for electricity generation low,” says Sophia Reker of the Leipzig University of Applied Sciences and first author of the study. The researchers base their research on a simulation of the German energy system using EnergyPlan software.

With Germany facing severe curtailment of methane supplies because of Vladimir Putin’s criminal attack on Ukraine, the German government enacted new policies this month to make the country less dependent on energy imports and reduce carbon emissions. The policies call for the share of renewable energy to be increased from just under 50%, where it is today, to at least 80% by 2030.

“Bifacial solar modules are somewhat more expensive than conventional solar systems. But as they increase the number of hours of available solar power, other electricity needs such as gas-fired power plants are reduced. Installed vertically, the solar systems can easily be set up on agricultural land. This creates additional earning opportunities for farmers and increases the area potential for renewable energies in Germany so much that we would only have to import a small amount of additional energy,” says Jens Schneider, Professor of Networked Energy Systems and co-author of the study.

Solar panels installed on agricultural land can support the growth of certain crops by protecting the crops from wind and heat. Flower strips for more biodiversity are possible directly under the modules. So-called agri-photovoltaics are to be particularly promoted in the future as a result of the federal government’s new legislative package, the researchers suggest.

For their study, researchers Sophia Reker, Jens Schneider and Christoph Gerhards used the EnergyPlan software to model an energy system for Germany which would results in 80 percent fewer carbon emissions in 2030 compared to 1990. The researchers assume an increase from the current 64 to 195 gigawatts of wind energy capacity and from the current 58 to 400 gigawatts of solar energy capacity.

That level of extra renewable energy would normally require a significant increase in battery storage, but the research shows the need for storage decreases if the majority of the added solar capacity is installed vertically in an east-west orientation. In a scenario without additional electricity storage, this alone can save more than 10 megatons of CO₂ per year. Those midday hours are when solar energy frequently exceeds demand and has to either be stored for later use or curtailed, which often means it goes to waste. Vertical orientation solar panels could reduce or eliminate the need for peaker plants that typically come online in the late afternoon and early evening when demand increases but supply from solar farms wanes.

“It could be shown that vertical PV systems enable lower storage capacities or lower utilization of gas power plants. Without any storage options a reduction of the overall carbon dioxide emissions by up to 10.2 million tons per year is possible,” the researchers claim.

“Especially in countries with a high number of citizens per area, the area available for PV power plants is a crucial issue. Often it is discussed whether an area should be dedicated to food production or electricity production. Also we need more space for promotion of biodiversity. The theoretical potential energy produced from APV systems is very high due to the large availability of agricultural land — up to 1700 TWh a year for Germany, which is more than triple the country’s 2019  electricity demand of around 500 TWh a year.”

Is this an “Ah, HAH!” moment for solar power? It might be. More than anything it shows what can happen when people challenge conventional wisdom. Vertically oriented solar farms could end the conflict between solar energy and the farming community which is particularly virulent in certain parts of the United States where many are more concerned with preserving their “way of life” than dealing with the existential threat of an overheating planet.

There are lots of industries who are salivating at the prospect of abundant (and therefore cheap) solar energy during the midday hours to use for electrolyzing water into green hydrogen or reducing the carbon emissions associated with making steel. But bringing more solar energy online earlier and later in the day could be one more tool for making renewable energy the preferred choice over new thermal or nuclear generating plants.

Kudos to the researchers for thinking outside the box and imagining a new way of exploiting the inexhaustible (for at least a few billion years) power of the sun. It is going to take all the creative thinking humans can muster to keep the Earth habitable into the next century and beyond.

Appreciate CleanTechnica’s originality and cleantech news coverage? Consider becoming a CleanTechnica Member, Supporter, Technician, or Ambassador — or a patron on Patreon. Don't want to miss a cleantech story? Sign up for daily news updates from CleanTechnica on email. Or follow us on Google News! Have a tip for CleanTechnica, want to advertise, or want to suggest a guest for our CleanTech Talk podcast? Contact us here.
In this article:Germany, vertical solar panels