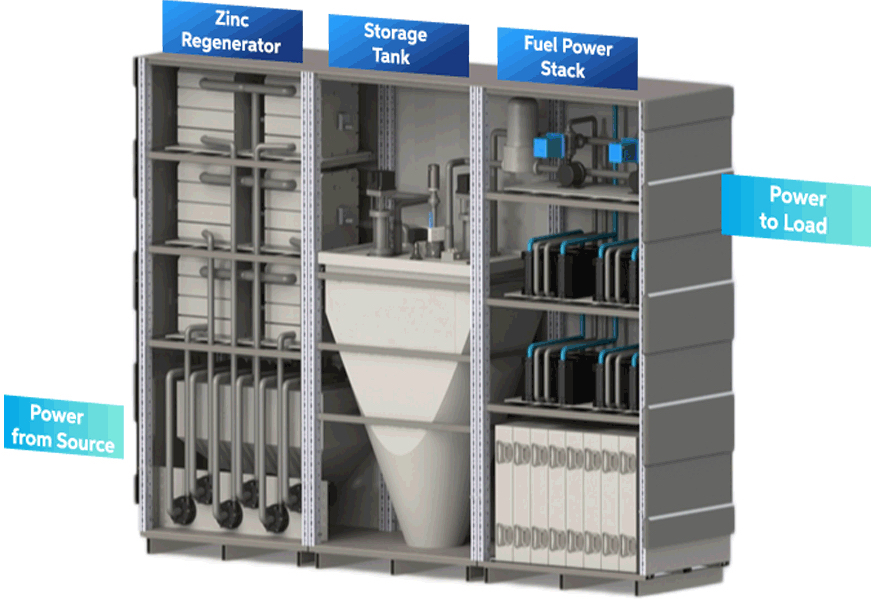 What with all the excitement over solid-state batteries, it’s easy to forget that other hot new energy storage technologies are also coming to market. The Canadian battery maker Zinc8 Energy Solutions, for one, is determined to keep reminding people. Zinc8’s new rechargeable zinc-air battery has been trialing in New York State, and earlier this month word dropped that the company is also considering the Empire State as home base for its new battery manufacturing plant.

Why — And Why — Is Zinc-Air Energy Storage?

Zinc-air energy storage deploys zinc particles and ambient oxygen to produce electricity on demand. Anyone with a hearing aid may already be familiar with the technology in a single-use form. Here, let’s have top battery-maker Panasonic explain it:

The idea of a rechargeable zinc-air battery first sailed across the CleanTechnica radar back in 2013, when we took note of a research project over at Stanford University.

“Zinc-air batteries have great promise due to the cheapness and abundance of their basic materials along with a relatively high energy density, but until now the technology has been bedeviled by “sluggish” catalytic reactions,” we observed. “Solving that problem could greatly expand the market for wind and solar power, including electric vehicle batteries and utility-scale energy storage.”

If you caught that thing about more wind and solar power, that’s the key. Conventional lithium-ion batteries are currently the energy storage platform of choice for wind and solar power, but the current state of technology is limited to just a few hours of storage, and Li-ion management systems are complex.

Li-ion battery arrays will continue to be sufficient for many use cases. However, deep decarbonization requires more wind and solar on the grid, and that means energy storage technology has to move beyond the partial-day scenario afforded by Li-ion energy storage.

The US Department of Energy, for one, is eyeballing new long duration batteries that provide electricity for 10 hours and more. Rechargeable zinc-air batteries could fit the bill.

Much has happened since the 2013 Stanford research. Last year, for example, a multinational team of researchers mapped out a pathway for creating rechargeable zinc-air batteries.

“Batteries based on the reaction of zinc and oxygen have been used for more than a century, but these have been primary (that is, nonrechargeable) cells,” they explained. “These batteries use an alkaline electrolyte and require a four-electron reduction of oxygen to water, which is a slow process.”

The team took note of previous research showing that a rechargeable process can be facilitated with a nonalkaline electrolyte that facilitates a two-electron zinc-oxygen/zinc peroxide chemistry.

“By making the electrolyte hydrophobic, water is excluded from the near surface of the cathode, thus preventing the four-electron reduction. These batteries also show higher energy density and better cycling stability,” they concluded.

Earlier this year, researchers at the Indian Institute of Technology Madras also proposed a battery-swapping model for the use of zinc-air energy storage technology in electric vehicles. The idea would be to swap out zinc “cassettes,” which could then be recharged with solar energy.

Zinc8 has come up with an energy storage solution that combines the zinc angle with flow battery technology, which is based on to the ability of adjacent fluids in motion to generate electricity.

In April, the company was happy to let the world know that it nailed a Best-in-Class title in the 2022 PropTech Challenge, a technology partnership between the Real Estate Board of New York and NYSERDA, the New York State Energy Research and Development Agency. The theme of the 2022 Challenge was Getting to Carbon Net Zero.

“Zinc8 Energy Solutions focuses on developing and commercializing its low-cost, long duration ZESS [Zinc Energy Storage Systems] for utilities, microgrid, and Commercial & Industrial markets,” Zinc8 explains. “It allows opportunities for peak demand reduction, time-of-use arbitrage, and participation in both the value stacking programs and the distributed long-duration energy storage space, all in conjunction with the opportunity for a significant reduction in carbon footprint.”

“The long duration (8-100+ hours) ZESS has no fire and explosion risk, has no capacity fade over extensive lifetime, and offers complete charge operational flexibility,” they add somewhat modestly.

As described by the company, its energy storage system delivers a range of 20kW to 50MW, with an 8-hour capacity or higher as the case may be.

“With the advantage of rechargeable zinc-air flow battery technology, the system can be configured to support a wide range of long-duration applications for microgrids and utilities,” Zinc8 explains. “Since the energy storage capacity of the system is determined only by the size of the zinc storage tank, a very cost-effective and scalable solution now exists as an alternative to the fixed power/energy ratio of the lithium-ion battery.”

What About That New Zinc-Air Battery Factory For New York?

If all goes according to plan, Zinc8 could tap New York State as the site of its new zinc-air battery factory. Earlier this month, US Senate Majority Leader Chuck Schumer (D-NY) affirmed that he has been in talks with Zinc8 CEO Ron MacDonald regarding their operations in upstate New York, in the town of Ulster.

The idea would be to complete an EPA-administered cleanup of the former TechCity campus in Ulster and restore it as a site for the new battery factory.

“Schumer made clear that Ulster’s former TechCity campus, now known as iPark 87, has all the right ingredients to become the home to their next major facility, and said that the historic $6 billion in federal incentives he passed in the bipartisan Infrastructure Investment and Jobs Act to expand U.S.-based battery technologies can help supercharge Zinc8’s future in New York,” Senator Schumer’s office noted in a press release.

“Zinc8’s interest in expanding hundreds of new jobs into the Hudson Valley at Ulster County’s former TechCity site, now called iPark87, would be a win-win-win. A once-contaminated asbestos dumping ground can be revitalized and once again be the beating heart of Ulster County’s economy, all while powering a cleaner, brighter future, fighting climate change, and creating hundreds of good-paying jobs,” said Schumer.

The Bipartisan Infrastructure Bill (aka the 2021 Infrastructure Investment and Jobs Act) carves out $6 billion in federal incentives to promote the US energy storage industry through R&D as well as production and supply chain improvements.

Speaking Of The Right Ingredients…

New York also has another advantage up its sleeve. In terms of enlisting top talent in STEM fields and recruiting a skilled labor pool to support new battery factories and other next-generation economic activity, New York is one of a shrinking number of states that continue to respect the human and civil rights of people who happen to be born with a uterus.

The ability of government officials and self appointed vigilantes to chase after uterus-enabled people from school age on up through menopause with all the identification, testing, tracking, monitoring and surveillance tools at their disposal is already at hand elsewhere in the US, and it is already having an impact on career decisions.

Too bad for anti-abortion states that lose out in the talent race. On the other hand, they’ll each still hold the same two seats in the US Senate no matter how repressive they are, and perhaps that is the point after all.

Don't want to miss a cleantech story? Sign up for daily news updates from CleanTechnica on email. Or follow us on Google News! Have a tip for CleanTechnica, want to advertise, or want to suggest a guest for our CleanTech Talk podcast? Contact us here.
In this article:Energy, flow batteries, new york state, NYSERDA, rechargable zinc-air battery, Renewable Energy, usa